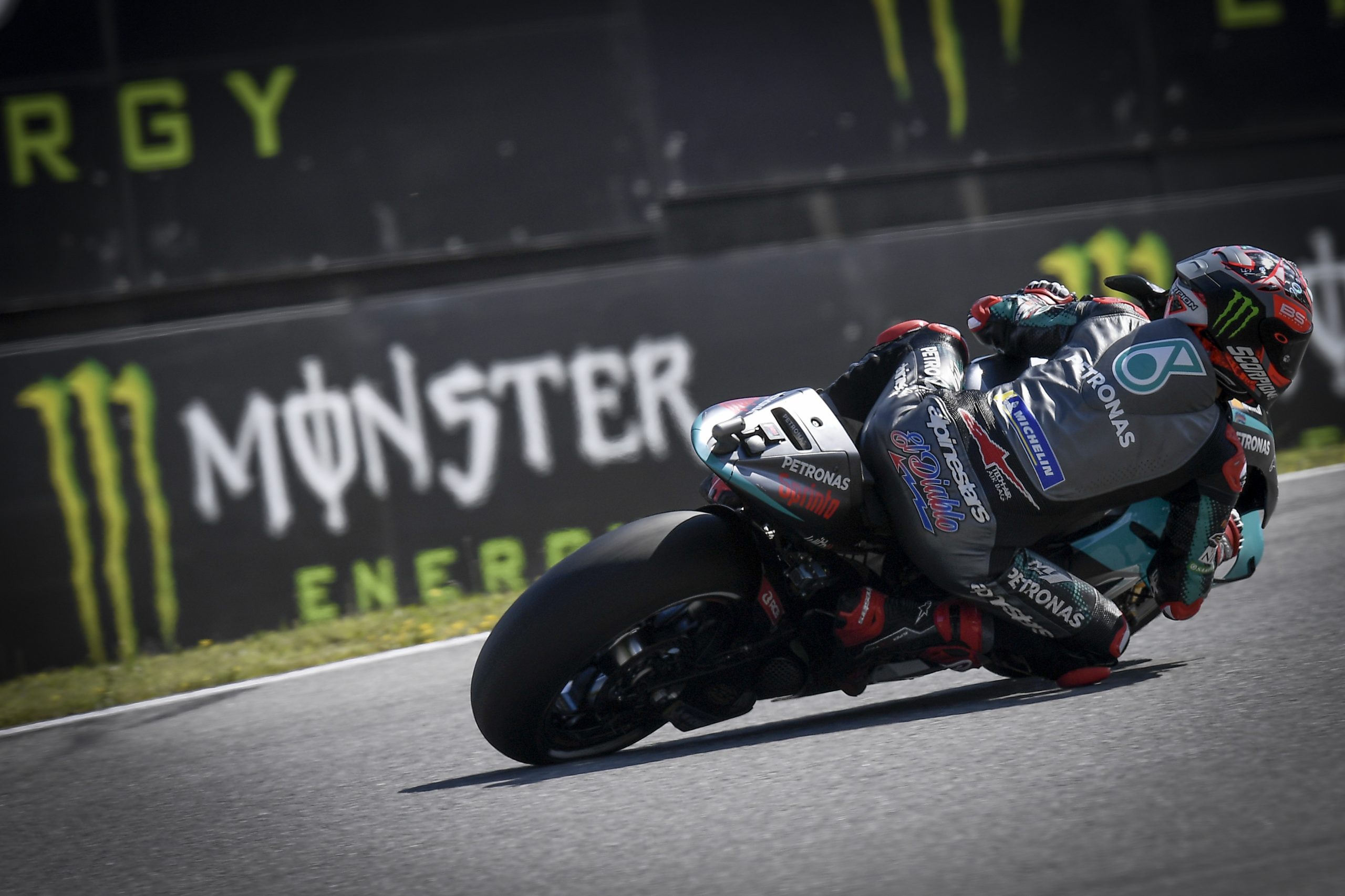 Petronas Yamaha SRT lock out the top, with Oliveira and Zarco for close company in an Independent Team 1-2-3-4

Fabio Quartararo (Petronas Yamaha SRT) remains the man to beat after Day 1 of the Monster Energy Grand Prix České republiky, setting the timesheets alive in the afternoon to end Friday fastest. It was far from lonely at the top, however, as his teammate Franco Morbidelli was just 0.007 behind to go P2 overall.

The top three was completed by another Independent Team runner in the form of Miguel Oliveira (Red Bull KTM Tech 3), the Portugese rider putting KTM within half a tenth of the top, with Johann Zarco (Esponsorama Racing) the fastest Ducati to make it a 1-2-3-4 for Independent Teams – and all four were within a tenth.

Francesco Bagnaia (Pramac Racing) crashed in FP1 and has been declared unfit. The Italian headed to the medical centre and then Brno University hospital for check ups on his right knee and has been diagnosed with a fracture at the top of his tibia.

FP1
Pol Espargaro (Red Bull KTM Factory Racing) was the man in charge for much of FP1, but the glory went the way of Takaaki Nakagami (LCR Honda Idemitsu) at the end of the session after a late charge put him on top. Behind him was Joan Mir (Team Suzuki Ecstar) as he impressed on his return Brno after his big crash in testing last year, ending FP1 just an infinitesimal 0.011 off the top. Pol Espargaro was therefore shuffled down to complete the top three, but the early pacesetter was still only 0.039 off P1.

Zarco impressed in P4 in his first session at Brno on a Ducati, with Maverick Viñales (Monster Energy Yamaha MotoGP) edging out key Championship rival Andrea Dovizioso (Ducati Team) to complete the top five. That made it five manufacturers in the top five, with only half a second covering the top 16 in FP1.

Viñales was an early crasher in the session as he slid out at Turn 13 – rider ok – and both Brad Binder (Red Bull KTM Factory Racing) and Jack Miller (Pramac Racing) subsequently ran off at the same corner, pulling solid saves out the hat to stay upright through the gravel. Miller’s teammate Bagnaia was the second rider to suffer a tumble in FP1, but he was unluckier as his spill ruled him out of the rest of the weekend and maybe the Austrian GP too.

FP2
Despite the hotter temperatures, the top 14 improved in the afternoon and Quartararo reversed his Friday trend from Jerez – where he finished both first days outside the top ten – as the end of the session became a hot lap shoot out and the Frenchman came out on top.

Mir was the man leading the way when Morbidelli struck and knocked a whopping 0.936 off the fastest lap of the day, kickstarting the FP2 gold rush as a flurry of red sectors started to appear from a good few riders. Oliveira got within a few hundredths, Viñales looked threatening, and Zarco and Mir were still up at the sharp end. But with 30 seconds left on the clock for Friday, Quartararo was the only man left to cross the line – and just pipped his teammate by 0.007.

That made it another Petronas Yamaha SRT 1-2, pushing Oliveira down to a nevertheless incredible P3. Zarco impressed in fourth once again, as in FP1, with Viñales completing the top five. The number 12 had punched in a stunning first sector on his last time attack, but the lap went away from him.

Mir was sixth in FP2 and overall following the shuffle, ahead of a big leap forward for Aprilia Racing Team Gresini’s Aleix Espargaro as he knocked seven tenths off his morning best to end the day in P7 – and just get the better of brother Pol Espargaro. Nakagami was ninth on the combined timesheets, ahead of Miller as the Australian rounded out the top ten overall.

That leaves Binder in P11, Valentino Rossi (Monster Energy Yamaha MotoGP) just behind him and Andrea Dovizioso down in P15. They’ll certainly be looking for more in FP3, although the time attacks didn’t come from everyone on Friday, so the margin could well be there…

Alex Marquez (Repsol Honda Team) had the sole incident in FP2, the Spanish rookie seemingly suffering a technical problem and pulling over early in the session before scootering back to the pits.

That’s it from Friday, come back for more on Saturday morning as the field head out for FP3 at 9:55 (GMT +2), before qualifying to decide the grid for the Monster Energy Grand Prix České republiky begins from 14:10.

Gajser and Haarup took the pole in Matterley Basin