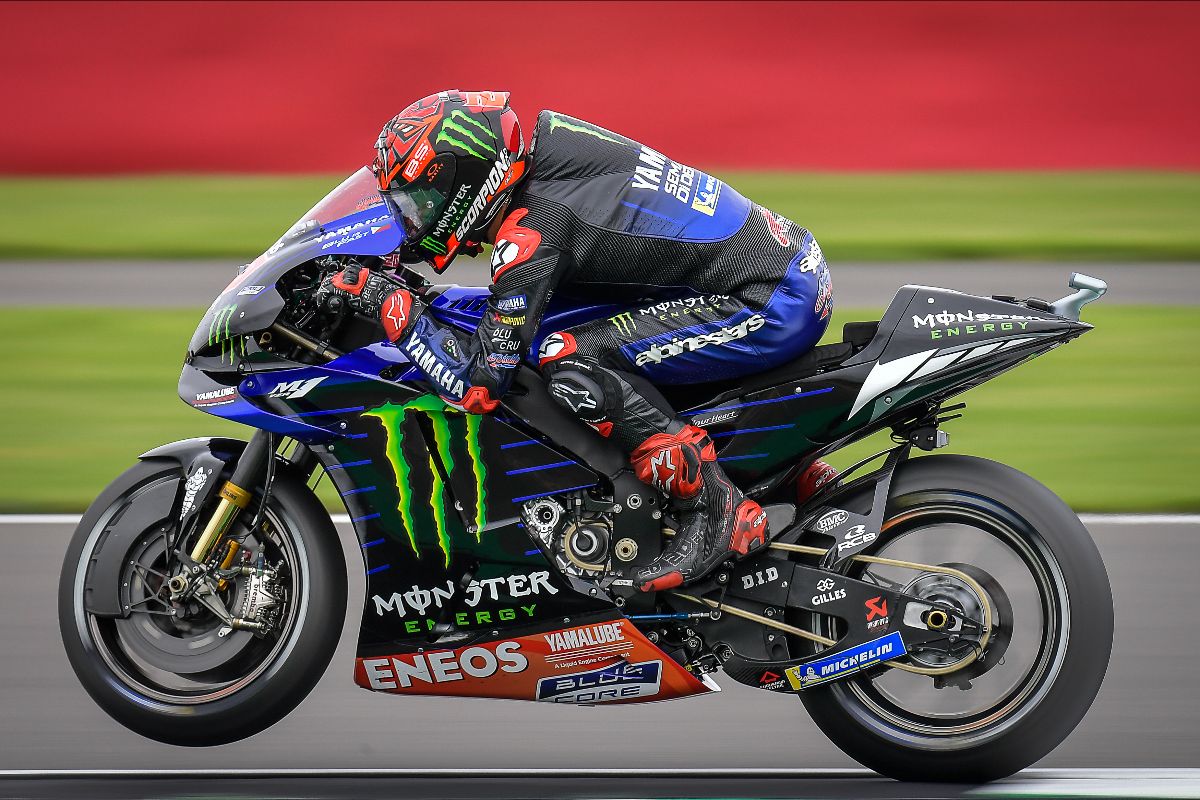 Despite an FP2 crash, the Yamaha rider heads the timesheets after blasting back out the blocks even faster.

Fabio Quartararo (Monster Energy Yamaha MotoGP) shot out the blocks at Silverstone, the Championship leader ending Day 1 of the Monster Energy British Grand Prix over half a second clear despite an FP2 crash. Jack Miller (Ducati Lenovo Team) was second quickest, with Jorge Martin (Pramac Racing) also bouncing back, in his case from an FP1 tumble, to take third on first contact with Silverstone on MotoGP™ machinery.

FP1
Marc Marquez (Repsol Honda Team) stole all the headlines in the morning. The eight-time World Champion was the fastest, and the only rider under the 2-minute barrier, but he also brought out the Red Flag for a fast crash through Maggots and Becketts. It was a lowside but a 270km/h lowside, leaving rider and bike sliding over the grass and gravel. The result was rider ok, bike not so much, and the Red Flag came out.

0.250 behind Marc Marquez was Aleix Espargaro (Aprilia Racing Team Gresini) as the Spaniard slotted into second, pipping Quartararo by 0.110. Pol Espargaro (Repsol Honda Team), who had a grandstand seat for teammate Marquez’ slide in the closing stages, took fourth by just 0.035, with Miller closing out the top five within less than a tenth.

Jake Dixon (Petronas Yamaha SRT) made a solid first impression, ending FP1 on a 2:03.939 and only seven tenths off Luca Marini (Avintia VR46).

Alex Marquez (LCR Honda Castrol) crashed and Martin also went down, both at Turn 12 and both riders ok.

FP2
There was another headline-grabbing crash in the afternoon, this time for Quartararo. The Frenchman went down at Turn 8, avoiding a highside by letting go early, and was initially holding his ankle and appeared in some pain. He was able to walk away and head back to the garage, however, as well as heading back out on track and going… even faster. So he was quickest, with a whopping 0.512 in hand over Miller.

Martin bounced back from his FP1 crash to leap up into third late in FP2, with Pol Espargaro and Marc Marquez completing the top five as they retained some good speed. Marc Marquez later explained he did have some sand in his eye from the crash though, causing irritation and affecting his FP2 running. Heading to the hospital for the ok, the number 93 says it should be fine for Saturday.

Alex Marquez was the other crasher in the afternoon, after Quartararo.

Francesco Bagnaia (Ducati Lenovo Team) was sixth quickest, just ahead of Aleix Espargaro. Austrian GP winner Brad Binder (Red Bull KTM Factory Racing) impressed with one of his best Fridays of the season so far, riding at the track for the first time in the premier class, as he took eighth.

2019 Silverstone winner Alex Rins (Team Suzuki Ecstar) was ninth, with Valentino Rossi (Petronas Yamaha SRT) completing the top ten on Day 1 after a solid day at the office for the ‘Doctor’ as he makes his last call at the British GP.

Reigning Champion Joan Mir (Team Suzuki Ecstar), riding at the track for the first time in MotoGP™ after having missed the 2019 edition through injury, was 13th.

Dixon shaved another 1.3 seconds off his best lap in the afternoon, getting to within around 1.2 of Alex Marquez and Miguel Oliveira (Red Bull KTM Factory Racing) ahead of him.