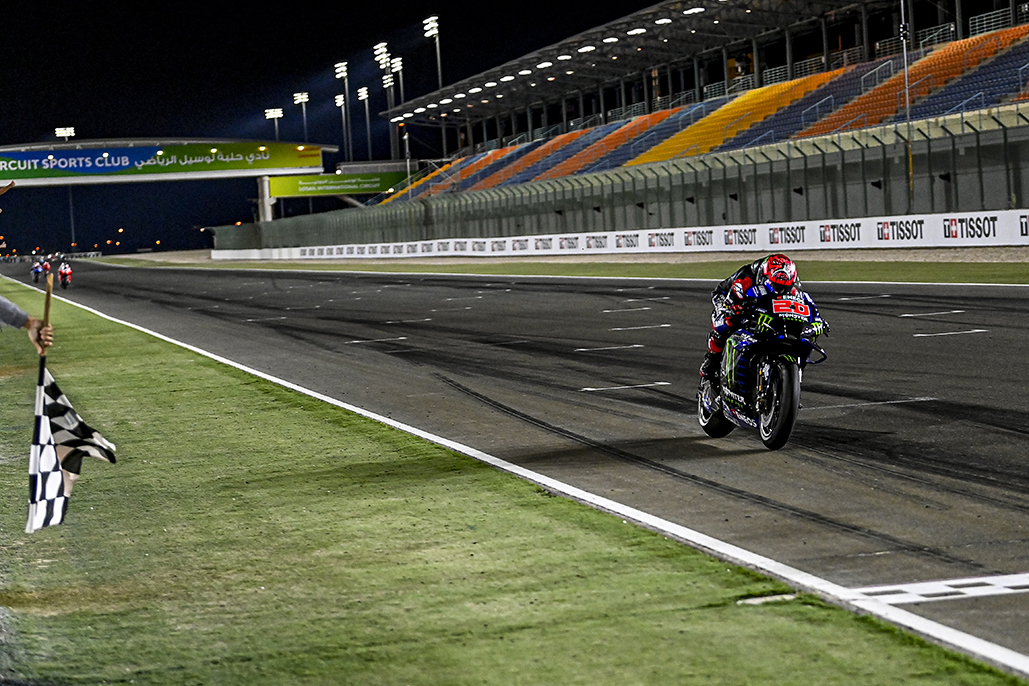 The first ever French 1-2 in the premier class, a rookie podium for Martin and a whole host of headlines: this was the Doha dogfight.

Fabio Quartararo (Monster Energy Yamaha MotoGP) put in a stunner at the TISSOT Grand Prix of Doha, making 2021 a clean sweep for Yamaha so far and heading up the first ever French 1-2 in the premier class as he pulled clear of the chasing pack at the perfect time. Compatriot Johann Zarco (Pramac Racing) took second as he duelled rookie teammate and polesitter Jorge Martin to the line, the Frenchman making history for his nation and waves in the standings as he takes over the Championship lead. Martin, meanwhile, makes his own waves as the rookie led much of the race from a spectacular start, coming home third for his first premier class podium only second time out. Behind the three, there was plenty of drama too… and it was the closest top 15 in history!

Martin kept his nerve off the line and shot off to lead around Turn 1, the Spaniard unaware that he’d actually be staying there for the majority of the race as his incredible Sunday began as it meant to go on. Behind him, Zarco slotted into second but Qatar GP winner Maverick Viñales (Monster Energy Yamaha MotoGP) went backwards, and Miguel Oliveira (Red Bull KTM Factory Racing) propelled himself from P12 to P4 in an absolutely stunning start. Both Suzukis got away very well too, as did third place Aleix Espargaro (Aprilia Racing Team Gresini) but it wasn’t a good start for the factory Ducati Lenovo Team riders or Quartararo. Jack Miller and Francesco Bagnaia even found themselves in the lower ends of the top 10…

Martin held his nerve at the front though and a MotoGP™ freight train followed him over the line as Alex Rins (Team Suzuki Ecstar) got the better of Oliveira to sit behind the leading Pramac duo. World Champion Joan Mir on the second Team Suzuki Ecstar machine then chucked it up the inside of Quartararo at Turn 6 as the riders got very close for comfort in the opening exchanges, with Viñales, Quartararo, Miller and Bagnaia scrapping for 7th with Brad Binder (Red Bull KTM Factory Racing), and Rins hounding Zarco further forward.

The number 42 and Zarco kept interchanging P2, and just when Rins thought he’d got the job done, the Ducati blasted back by on the straight. Next up to try and carve through was Bagnaia as the Italian moved his way up into P5, soaring past Mir on the straight, with Miller soon following his teammate through by doing the exact same thing: wringing the neck of his GP21 on the front straight as Aleix Espargaro slipped to P7.

Approaching half race distance, Martin was still leading, and looking as cool, calm and collected as ever. Just behind him though, tensions were starting to reach boiling point in the heat of the desert. Turn 10 saw Mir make a close move on Miller, contact made between the two, and the Ducati was wide. Rins, after a front end scare at Turn 9, then had another moment at the final corner before another flash between Miller and Mir grabbed the spotlight back. Coming onto the front straight, the two clashed – and plummeted as they lost drive. The incident was investigated, but no action taken.

But Martin rolled on, and by now Quartararo was up to P4 behind the rookie in the lead, Zarco and Bagnaia. Rins almost found a way past the number 20 on Lap 15 but it wasn’t to be and with seven to go, it was still impossible to call. Miller was P6 with Viñales P7, Mir was trying to find a way past eighth place Aleix Espargaro and Pol Espargaro (Repsol Honda Team), Binder and Enea Bastianini (Avintia Esponsorama Racing) were gaining.

With seven to go, Quartararo cut past Bagnaia at Turn 15 but the Italian bit straight back on the straight. At Turn 1 it came undone, however, as the Ducati headed well wide and dropped from third to seventh – as Pol Espargaro also overcooked it and sailed into the run off. Both were able to slot back in, and at least kept in touch as just nine seconds covered the top 18.

The final five laps dawned and it remained the rookie steadfast in the lead, with Zarco on his tail. Just behind, Miller picked up Quartararo, but the Frenchman cut back to hold onto a vital third as the time to push was nigh. Viñales knew that too, slicing past Rins for fifth, but it was the number 20 Yamaha making up more ground this time around as Quartararo struck for second and dispatched Zarco, then soon past Martin and into the lead.

The course of anyone vs Ducati down the main straight never did run smooth, however, and Martin sailed back past. The answer was always going to come quick though and Quartararo hit back at Turn 3, into the lead and with a little more time to try and break clear of the Borgo Panigale grunt. The lead was soon half a second, and Viñales was stuck duelling Rins as his teammate got the hammer down.

As the last lap dawned, Quartararo’s lead was 0.7 seconds and it was El Diablo’s to lose, with Martin leading Zarco in the fight to complete the podium. Viñales ran wide at Turn 1, allowing Rins to slide on through in the battle for P4 too, so it looked like two Frenchmen and a rookie on the podium – but in what order?

Quartararo kept it pitch perfect to hammer round Losail for the last time in 2021, pulling out a few more tenths to cross the line for his first factory Yamaha win by a second and a half. Behind him, it was war at Pramac, but a clean war. Martin held it onto the last lap but Zarco struck at Turn 15, muscling past and making it stick. The number 89 flashed out to have a look at the final corner, but the rookie thought against it and it went down to the drag to the line – decided by just 0.043. Zarco takes it and the Championship lead, and Martin is forced to settle for third, if delight at an incredible first premier class podium can be called settling.

In the battle for fourth, Rins held on as he and Viñales tussled it out, the Spaniards separated by just 0.022 seconds at the flag. Bagnaia was a further half a second behind the Spanish duel, the Italian taking P6 after looking to threaten a little more earlier in the race. Mir eventually came home in P7 after a heated race, the reigning Champion losing out after the incident with Miller.

Binder cemented a brilliant P8 for himself and KTM as the South African stalked his way up to the Austrian factory’s best result at Losail by some margin. Miller took a tougher P9 for the second race in a row at Losail. The Aussie also said he was suffering arm pump and that’s first on his post-Qatar agenda. Aleix Espargaro completes the top ten, which isn’t where he started but it’s still closer than Aprilia have been before to the front after another impressive race.

Bastianini recovered from a more difficult qualifying to finish just 5.550 seconds adrift of the win in P11 in another memorable day from the reigning Moto2™ World Champion. He beat compatriot Franco Morbidelli (Petronas Yamaha SRT) by two tenths. Pol Espargaro, after his Turn 1 excursion, took P13 ahead of HRC test rider Stefan Bradl (Repsol Honda Team). Oliveira slipped down the order to pick up the last point after his stunning start.

And so, history is made. 8.928 second is the gap between winner Quartararo and 15th place Oliveira in the closest top 15 finish we’ve ever seen, with Doha delivering a stunner under the floodlights. Zarco heads to Europe with 40 points at the top of the standings, with Quartararo and Viñales on 36 points apiece but classified in that order. What will Portimao bring? We don’t have to wait long to find out!

Fabio Quartararo: “I’ve not won a lot of races but this one was such a special win. I came from eighth or seventh, and I saw the pace and track were totally different from FP4 and Warm Up and I decided to really keep the tyre for the end. Actually, when I saw Maverick coming I thought ‘ok now is the moment to push and start to overtake’. It’s such an amazing moment for me, it’s a dream. I always dreamed of winning in Qatar, unfortunately it was not the first but the second! Thanks to everyone who believed in me, I’ve worked a lot in this preseason to achieve this goal and the media always tell me it’s extra pressure to take the place of Valentino! I want to thank my family, Yamaha, my friends, and I’ll enjoy this moment with a nice McDonalds tonight!”