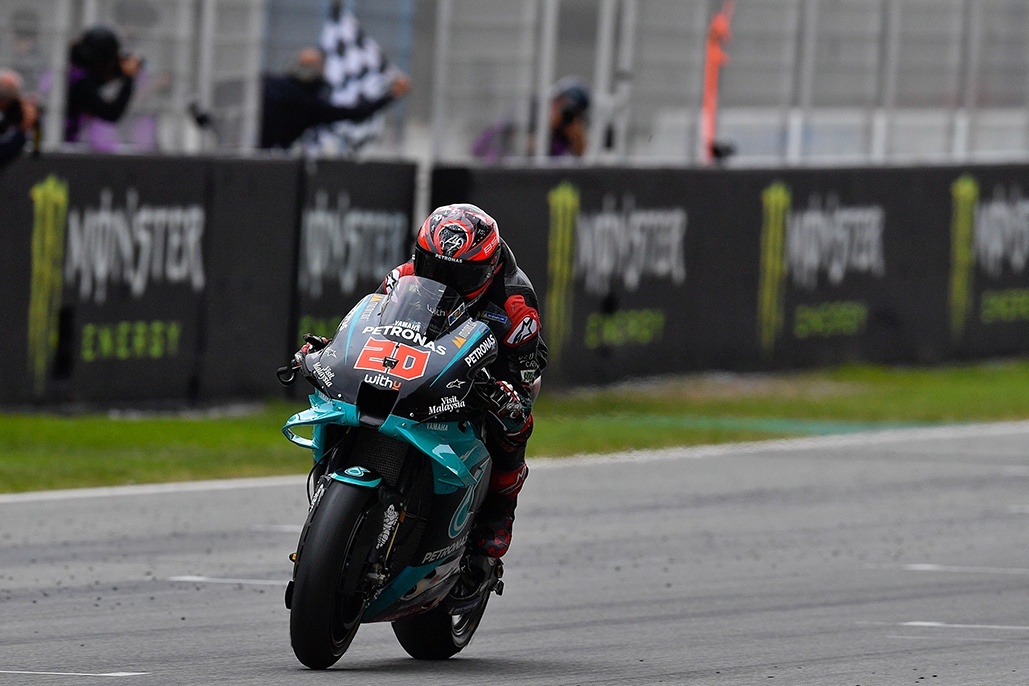 The Frenchman holds off Mir to win, with Rins giving Suzuki a milestone in third as Dovizioso and Viñales lose big ground in the standings.

Fabio Quartararo (Petronas Yamaha SRT) bounced back in serious style in the Gran Premi Monster Energy de Catalunya, the Frenchman picking his way to the front to pull away initially before just holding off a charge from Team Suzuki Ecstar’s Joan Mir. Mir took yet another podium though, and his Team Suzuki Ecstar teammate Alex Rins sliced through from P13 to third to make it two Suzukis on the podium for the first time since 2007. That was as drama ripped through the title fight just behind, with Andrea Dovizioso (Ducati Team) down and out early on after he got collected by Johann Zarco (Esponsorama Racing) in a domino effect Turn 1 shuffle, and Maverick Viñales (Monster Energy Yamaha MotoGP) dropping down to P15 before recovering to ninth.

Franco Morbidelli (Petronas Yamaha SRT) was lightning off the line and grabbed the holeshot, with Jack Miller (Pramac Racing) propelling himself from fourth to second as Valentino Rossi (Monster Energy Yamaha MotoGP) and Quartararo dropped a couple of places. The huge drama then hit early doors at Turn 2: Danilo Petrucci (Ducati Team) almost went down – and pulled off an amazing save – but it was just in front of Johann Zarco (Esponsorama Racing). Petrux clipped Pol Espargaro (Red Bull KTM Factory Racing). and, reacting, Zarco tucked the front. On the outside of the dominoes lay Dovizioso, and the (former) Championship leader and Zarco were down and out.

Back up at the front it was a little less dramatic as Rossi got the better of first Quartararo and then Miller, before the Australian was then wide to allow Quartararo through too, making it a Yamaha 1-2-3 at the end of the opening lap. Mir was holding off teammate Rins for P5 as both Suzukis had made good starts, Rins especially so, whereas Viñales got an awful start and shuffle at Turn 1, down in P15.

It didn’t take long for the top five to start pulling clear of the chasing pack, with Pol Espargaro getting the better of Rins for P6 and Mir then last man half in touch with the front in the early stages. The gap to the number 36 was a second on Lap 3 and up to two a couple of laps later though, with the top five all equally split on the road. Quartararo had Rossi firmly in his sights, however, and the 21-year-old homed in on the ‘Doctor’, making a pass stick at Turn 1 to make it a Petronas 1-2. Miller was sticking with the three Yamahas in fourth as Mir dropped back slightly, but it was early, early doors… and much was yet to come.

By Lap 8, Quartararo was hounding teammate and race leader Morbidelli, with Rossi and Miller waiting in the wings. ‘El Diablo’ then snatched the lead into Turn 1 at the beginning of Lap 9, and a fastest lap of the race came in for the number 20. Morbidelli and Rossi were keeping him honest though and then set slightly quicker lap times on Lap 10, with nothing to choose between the YZR-M1 trio. Miller was 0.7 seconds off the podium at that point, with Mir 1.2 behind Miller.

With 14 to go, there was just 0.8 covering the leading three, but Morbidelli was then nearly down at Turn 1 a lap later. The Italian was out of shape into the braking zone and ran wide, then nearly tucking the front, just saving it. Rossi was through on his protégé with the number 21 slotting back into third, and Miller now also seeming to struggle in the fight to keep Mir at bay. Quartararo was just 0.7 ahead of the number 46 up front too, although that then went up to 0.9s on the 15th lap of 24, with the tension palpable in Barcelona.

On Lap 16, that tension broke with more drama at Turn 2. On for his second podium of the season and 200th premier class rostrum on his 350th premier class start, Rossi slid out of contention as he tipped into the left-hander. Rider ok, but a big chance gone. That left Quartararo with a three-second lead over his teammate, which seemed like some solid breathing pace. But after a Turn 10 mistake from Miller, Mir was up to third and smelt blood as that now foreboding late-race pace for the Suzuki man was coming to the fore again. With seven to go, Mir was just half a second off Morbidelli.

Suzuki late race pace was coming on strong for Rins, too. With five to go, the number 42 was all over the back of Miller in the fight for fourth, with Mir unable to get within striking distance of Morbidelli for the time being. Quartararo seemed safe in P1, his lead up to 3.3, but Rins then pounced on Miller at Turn 10; the two Suzukis on a charge.

Quartararo’s lead was 2.8 with four to go and at the end of Lap 21, the gap was down to just 2.5 – Mir seven tenths quicker than the race leader, and the lead Suzuki man now right on Morbidelli. Onto the penultimate lap, Mir struck for second, and that wasn’t the last of Morbidelli’s worries as Rins homed in as well. The Suzukis were swarming and Mir was immediately off into the distance from the number 21 Petronas Yamaha, with Rins then up the inside of Morbidelli at Turn 10 as well, making it two Suzukis in the top three for the first time since Misano 2007.

Was that all she wrote? Quartararo’s lead was 1.8, but Mir was flying. Halfway round the last lap the Mayorcan was just 1.4 off, and the tenths kept evaporating from Quartararo’s advantage. In the final sector, it was almost equidistant from the Frenchman to Mir to Rins, and the number 20 seemed to almost be looking over his shoulder. Having pushed so hard so early, there wasn’t enough grip left for pushing late to make up much ground…

Round the final corner though, the Frenchman stood firm. An emotional victory ultimately just a second ahead of Mir sees him take back the Championship lead, and get back on the top step for the first time since Jerez. Mir taking yet another rostrum, however, moves him up to second overall – just eight points back and the man on consistent form, Jaws music and all. What would one more lap have meant between the two now at the top? Rins, meanwhile, gained an impressive ten places to take third and his first podium since his stunning win at Silverstone last year, making it a real milestone day for Suzuki with both Hamamatsu machines on the podium for the first time in 13 years.

Morbidelli slipped to P4 after the Suzuki late charge, but he’s now just seven behind Dovizioso on the standings. Miller managed to hold off teammate Bagnaia on the last lap to claim a top five, making it strong rides for both Pramac Racing riders in Barcelona after Ducati looked to be on the back foot on Friday. Nakagami was just a tenth behind the two as the Japanese rider keeps up his run of finishing in the top 10 in every race this season – the only rider to do so – with Petrucci eighth for his second best result of 2020.

Viñales’ difficult day at the office after the ground lost at Turn 1 saw the number 12 only able to push back through to ninth, although that is some points at least. The Yamaha rider is now 18 adrift of Quartararo heading to the French GP though, and he’ll want to hit back quickly at a venue he’s reigned before. Battered and bruised Cal Crutchlow (LCR Honda Castrol) gritted his teeth for a great top 10 ride, the Brit less than a second away from Viñales.

That’s it for a dramatic, pivotal and, at times, chaotic Catalan GP. It’s advantage Quartararo as we head for his home turf at Le Mans, and the Sarthe venue has hosted plenty of Yamaha glory before. Will we see more in two weeks? Mir will be keen to make sure we don’t, still hunting for that first win, as Viñales and Dovizioso now face an uphill battle to get back up there. Come back for more spectacular MotoGP™ in two weeks!

Fabio Quartararo: “Honestly it was a difficult race, I made a great start then I was fourth, Jack made a mistake and I knew that was the perfect time to overtake! When I took the lead, and Franco stayed some laps behind, our pace was really fast and I think at that moment it was way too fast to keep the tyre fresh to the end. At the end I was three seconds slower but it’s not because I was in control! I was pushing at my maximum, and unfortunately it’s difficult to understand because the two guys here were much faster than me at the end but I think it was so important to make the first half of the race in the best conditions. We can be happy with our job today after five races of tough times. We learned many things but today it’s good to be back on the podium!”