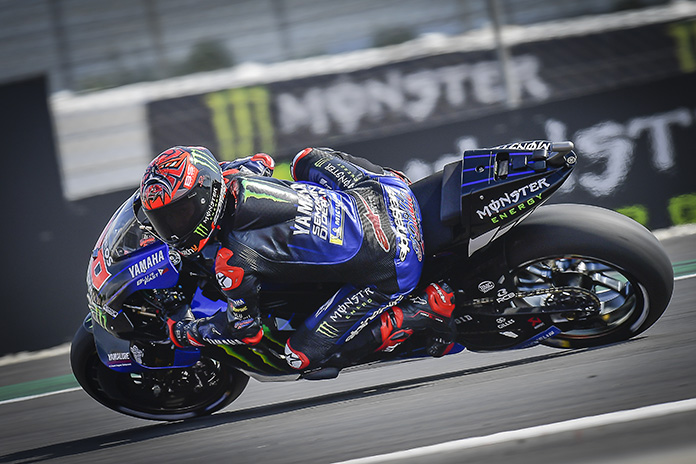 El Diablo can’t be stopped at Catalunya, but Miller runs him close despite a crash and a trip to Q1

Fabio Quartararo (Monster Energy Yamaha MotoGP) was most definitely the favourite for pole at the Gran Premi Monster Energy de Catalunya, but the Frenchman was ultimately run close for the honour as Jack Miller (Ducati Lenovo Team), despite a crash in Q2 and a trip through Q1, managed to end the session just 0.037 back. Nevertheless, it’s a fifth pole in a row for El Diablo – the first time anyone has managed that since Marc Marquez (Repsol Honda Team) in 2014, and the first time a Yamaha rider has done it since Jorge Lorenzo in 2010. It’s a French front row party once again in Catalunya in third too, with Johann Zarco (Pramac Racing) top Independent Team rider in P3.

Q1
Q1 saw the fireworks begin early as Miller found himself looking to move through, and with Marc Marquez for company rolling down pitlane the Aussie was this time asked for a tow, rather than his more usual taxi service. The response? Get on with the job, but not before rubbing his fingers together at the number 93 in a perfectly-timed “it’ll cost ya” gesture on the way out of the pits.

In the end it didn’t, with Miller going quickest and Marquez briefly second as he followed the Ducati round, but the next man in the train, Marquez’ teammate Pol Espargaro, then crossed the line… and knocked him out by just 0.011. Marquez was left in Q1, and it was Miller and the number 44 Honda heading through.

Q2
Quartararo didn’t take long to find his way to the top of the timesheets in Q2, his 1:39.351 the first benchmark for everyone to try and beat. Franco Morbidelli (Petronas Yamaha SRT) did on his second flying lap but Quartararo firmly laid down the gauntlet on his next flyer – a 1:38.853, the best of the weekend. The Frenchman’s advantage was 0.421 after the first set of runs, with Morbidelli and Maverick Viñales (Monster Energy Yamaha MotoGP) on the provisional front row.

This was far from a done deal for El Diablo though. His competitors were finding speed on their second runs as Brad Binder (Red Bull KTM Factory Racing), teammate Miguel Oliveira, Zarco and Miller all took turns on the provisional front row, Miller especially a threat going just 0.037s off.

The Australian then slammed in a red sector in the first part of his next lap, but that was all she wrote as he then highsided out at Turn 3, rider ok. That meant yellow flags ended Quartararo’s final push, too, although a few remained on a charge further round the lap.

Zarco, forcing his way past Binder at the updated Turn 10, was one of them and he shot to P3 on his final flying lap, shoving Oliveira off the front row by just 0.050.

The Grid
Quartararo, Miller and Zarco therefore have the clearest view to Turn 1, with Oliveira heading the second row from Morbidelli by another tiny margin of just 0.010. Viñales completes Row 2.

Reigning Champion Joan Mir (Team Suzuki Ecstar), meanwhile, starts tenth. But the 2020 Catalan GP podium finisher has made quick progress in the past and has more podiums from off the front two rows than on them. So will that stat continue at Catalunya?

That’s a wrap on Saturday action in Barcelona, with half a second covering the top ten on the grid. Quartararo holds the cards so far, but does anyone have an ace on Sunday? We’ll find out at the slightly earlier time of 13:00 (GMT +2) as the lights go out for the premier class at the Gran Premi Monster Energy de Catalunya.

Fabio Quartararo: “I’m really happy, feeling great with the bike. In FP4 we wanted to try both tyres, medium and hard, and both are working good but I don’t know which one to choose. The feeling is similar and laptimes are really good. Really happy, qualifying was great, I had a bit more on the last lap but there was a yellow flag. But I’m really happy and I think we can have a great race tomorrow. Just the question mark is which tyre we’ll use.”