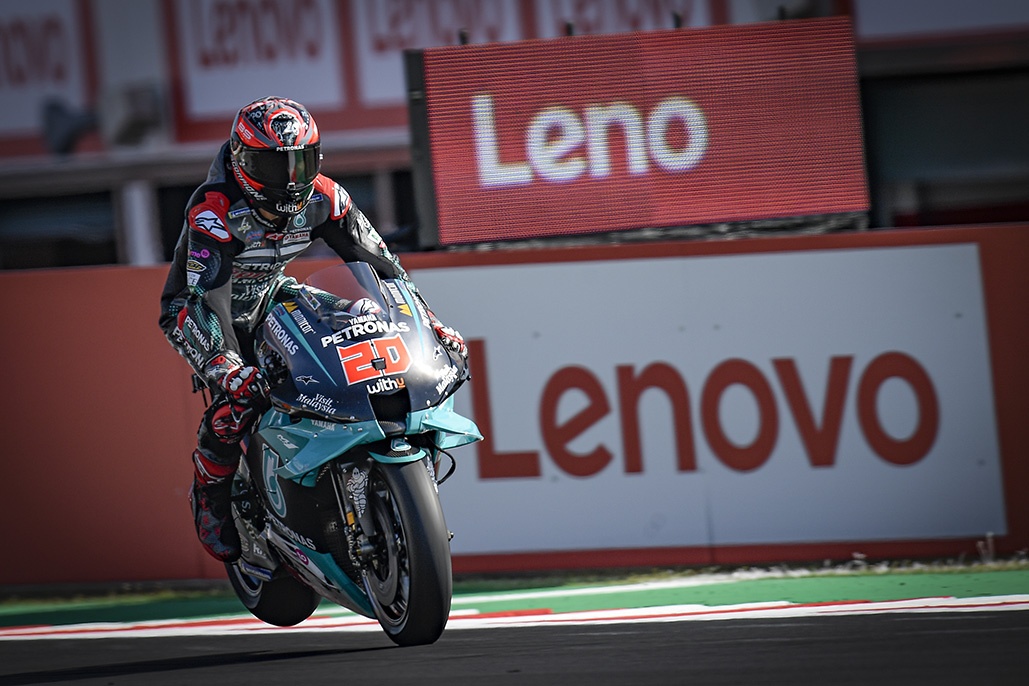 The Iwata marque make it a 1-2-3 on Day 1 at Misano, with KTM joining the party in the top five.

After a two tough weekends at the Red Bull Ring, Friday saw a change of fortunes for Yamaha at Misano World Circuit Marco Simoncelli, with the Iwata marque leading the way with a 1-2-3. It was Fabio Quartararo (Petronas Yamaha SRT) who took to the top by the end of play, the Frenchman turning the tables on Maverick Viñales (Monster Energy Yamaha MotoGP) in the afternoon after the number 12 blitzed FP1. The gap between the two? An infinitesimal 0.009! Third went the way of Franco Morbidelli (Petronas Yamaha SRT), who once again showed some serious speed in 2020.

FP1
The first premier class session of the day most definitely belonged to one man: Viñales. The Spaniard set a blistering 1:32.198 to head the timesheets by over half a second in the morning, beating his own 2019 pole position time and going over a second quicker than FP1 last year. Quartararo was the rear gunner for Top Gun in second, ahead of an impressive session for Aprilia in third. Aleix Espargaro (Aprilia Racing Team Gresini) completed the top three for the Noale factory, the Spaniard 0.751 adrift of the top… but that translating into a deficit of just two tenths to Quartararo given Viñales’ margin.

Things got lively in the latter stages of the session on fresh rubber, with a few putting in time attacks. Viñales hit first to oust Quartararo from the top in the final two minutes, with Zarco and the Aprilias striking next. Viñales had the last word though, slamming in that stunning last lap to extend his advantage to over half a second.

No one crashed in the session.

FP2
The tables were turned in the afternoon as Quartararo took over at the top, getting the better of teammate Morbidelli by 0.178 in a Petronas Yamaha SRT 1-2. Pol Espargaro (Red Bull KTM Factory Racing) was third, ahead of a stunning session for rookie Iker Lecuona (Red Bull KTM Tech 3) in P4. Local legend Valentino Rossi (Monster Energy Yamaha MotoGP) completed the top five in FP2, just ahead of Viñales.

In the early stages, Quartararo led the way from Takaaki Nakagami (LCR Honda Idemitsu) and Viñales, with Lecuona impressing early on to sit inside the top five. Viñales was down to serious business, however, working on the medium front and hard rear Michelin tyres. The Spaniard looked like he was on rails, consistently setting personal bests. The Team Suzuki Ecstar machines of Alex Rins and Joan Mir were also going well in FP2 to both share a period at the top of the timesheets, but the Hamamatsu factory wouldn’t stay there by the end of the day.

Red Bull KTM Factory Racing’s Brad Binder then took a tumble at Turn 6, but the South African went to the top of the timesheets not long after as the riders pushed for that one-lap time attack in the final few minutes. Morbidelli, who was 12th in FP1, was next to take over at the top, before teammate Quartararo snatched it back to have the final say on Friday’s fastest.

Overall, that lap was enough to secure fastest overall on the combined timesheets for ‘El Diablo’, but when taking into account Viñales’ quickest from FP1, it’s not by much. Just 0.009 split the two at the top, with Morbidelli in third.

Pol Espargaro is therefore shuffled down to fourth overall, 0.297 off the top and with a couple of tenths in hand over Lecuona in P5. Rossi was next up to make it all four Yamahas in the top six, with Danilo Petrucci (Ducati Team) the first Borgo Panigale representative as he slotted into seventh overall.

Brad Binder is P8 after Day 1, with Styrian GP winner Miguel Oliveira (Red Bull KTM Tech 3) just behind him… making it all four KTMs in the top ten and on for potential graduation to Q2. Aleix Espargaro was only 0.001 off the Portuguese rider, however, completing the top ten for the Noale factory.

There’s one definite name missing there, and it’s the man second in the Championship: Andrea Dovizioso (Ducati Team). The Italian was 11th on the combined timesheets by just 0.009, and he’ll be the first looking to move forward on Saturday. Jack Miller (Pramac Racing), double podium finisher at the Red Bull Ring, was also down the order a little as the Aussie took P17 – a few hundredths ahead of teammate Francesco Bagnaia as the latter returns from injury.