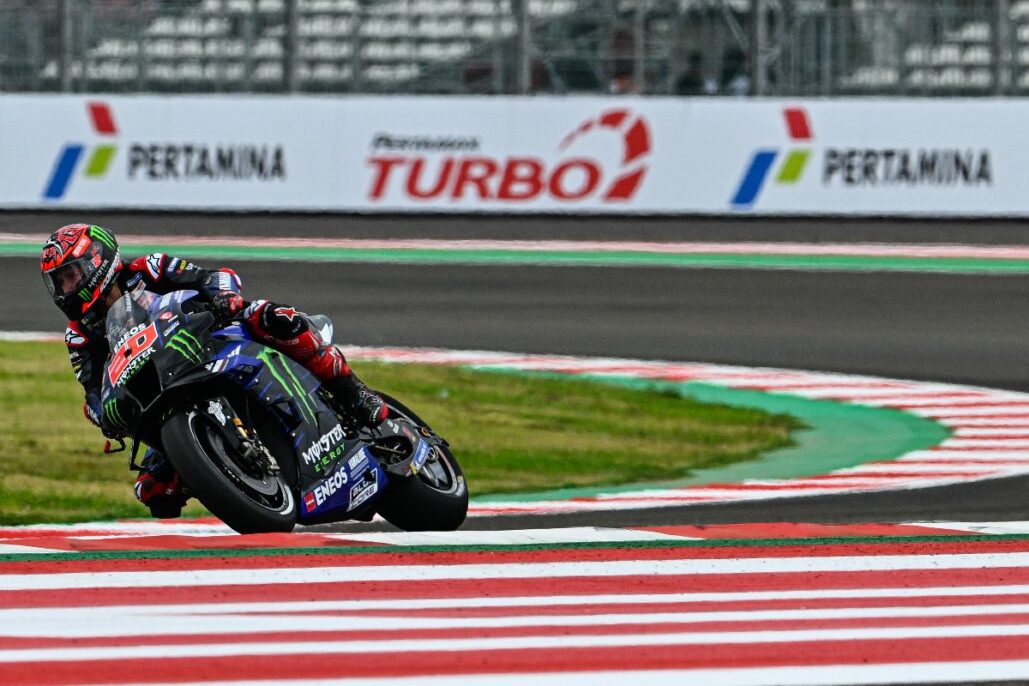 The Iwata duo take the spoils as action opens in Indonesia, with Zarco completing the top three on Friday.

What a difference a week and a half makes! After a tougher Qatar GP than many expected, it’s a Monster Energy Yamaha MotoGP™ 1-2 at the end of Friday action at the Pertamina Grand Prix of Indonesia. Fabio Quartararo leads teammate Franco Morbidelli by just 0.030s thanks to a table-topping 1:31.608, with Johann Zarco (Pramac Racing) sitting in P3 heading into Saturday.

Mandalika Test pacesetter Pol Espargaro (Repsol Honda Team), 2020 Champion Joan Mir (Team Suzuki Ecstar) and 2021 runner up Francesco Bagnaia (Ducati Lenovo Team) all finished no higher than P20 too, as did eight-time World Champion Marc Marquez (Repsol Honda Team) as the number 93 suffered a fast crash in FP2, rider ok despite the excursion over the limit. So it’s all eyes to the sky ahead of FP3 as they look to improve…

FP1
After topping the test back in February, Pol Espargaro was fastest out the blocks thanks to a late 1:33.499. The Spaniard was a fitting 0.044s quicker than Miguel Oliveira (Red Bull KTM Factory Racing) and 0.079s ahead of Repsol Honda teammate Marc Marquez.

The premier class got plenty of slick tyre running under their belts on Friday morning, with the earlier heavy morning downpour forcing Moto3™ and Moto2™ onto wets but the Pertamina Mandalika Circuit already dry enough at the start of MotoGP™ FP1 for the riders to head straight out on Michelin slicks. Morbidelli and Zarco completed the top five in the opening 45-minute stint with good pace in the morning too, but just 0.9s split the top 10.

Aleix Espargaro (Aprilia Racing) suffered a technical problem, but there were no crashes.

FP2
It was far from an ideal start to FP2 for reigning World Champion Quartararo as the Frenchman encountered an issue with his YZR-M1 at the beginning of his third lap, but he was back out on track with 30 minutes to go. Meanwhile, Oliveira led the way in the opening exchanges from Marc Marquez and Jack Miller (Ducati Lenovo Team).

There was plenty of work for Sunday’s race underway in the middle part of the session, and there was just 0.8s splitting the top 20 heading into the final quarter of an hour of the day. Oliveira was still leading, but that soon changed as Quartararo set a 1:32.570 to go 0.137s clear of the Portuguese rider with 13 minutes left on the clock. And then began the custom FP2 mini qualifying attacks…

With five minutes to go, Jorge Martin (Pramac Racing) unleashed his first effort on a soft rear tyre – a 1:31.904, half a second quicker than Takaaki Nakagami (LCR Honda Idemitsu). But then Morbidelli and Qatar winner Enea Bastianini (Gresini Racing MotoGP™) got to within a tenth of Martin, before Zarco beat his Pramac Racing teammate to the top. Soon enough though, it was a factory Yamaha 1-2, with Quartararo leading Morbidelli by almost nothing as Bastianini and Marc Marquez both crashed in quick succession – riders ok.

That proved costly not only for Marc Marquez, but also for the riders pushing for their fastest lap times in the closing stages as yellow flags put paid to improvements. Bagnaia was visually frustrated coming back into pitlane knowing he’d missed the chance to grab an important top 10, and the Italian and plenty more will be hoping FP3 remains dry…

Provisional Q2 places
Behind the Yamaha 1-2, it’s a Pramac 3-4 as Zarco edges out Martin by just 0.011s. They’re the first of four Ducatis in a row as Bastianini completes the top five despite his late crash and Miller slots into sixth. Aleix Espargaro, Brad Binder (Red Bull KTM Factory Racing), Oliveira and Alex Rins (Team Suzuki Ecstar) are the final riders currently set to move through to Q2, with less than half a second covering the fastest 10 riders on Day 1.

If that wasn’t close enough, just 1.033s covers the top 20. With the late crashes and subsequent yellow flags, numerous riders will be praying that conditions on Saturday morning are good enough to allow for improvements. FP1 pacesetter Pol Espargaro, Marc Marquez, 2020 World Champion Mir and Pecco are just four of some key players looking for much more.

Make sure you don’t miss MotoGP™ FP3 from Mandalika, as we wait and see what the weather musters up for the premier class in their final chance to earn an automatic place in Q2. Qualifying then begins from 15:05 as the grid gets decided for the inaugural Grand Prix at the Pertamina Mandalika Circuit.