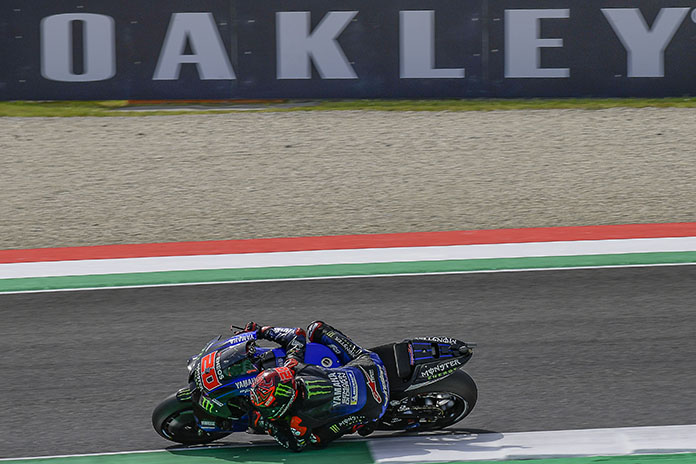 Bagnaia and Zarco give chase, with Aprilia and KTM both right up in the mix on Saturday.

Fabio Quartararo (Monster Energy Yamaha MotoGP) put in a stunner for pole position at the Gran Premio d’Italia Oakley, the Frenchman reporting it was one of his best ever laps as he broke the all-time lap record at Mugello with a 1:45.187. Francesco Bagnaia (Ducati Lenovo Team) was his closest challenger on the final push but was forced to settle for second, with Johann Zarco (Pramac Racing) taking third in a last lunge; once again top Independent Team rider. That means it’s the Championship top three on the front row on Sunday… with back to-back winner Jack Miller (Ducati Lenovo Team) looking for a good launch from fifth.

Q1
After a crash in the latter stages of FP3, Maverick Viñales (Monster Energy Yamaha MotoGP) found himself down in Q1 and early on, the Spaniard showed his frustration to Takaaki Nakagami (LCR Honda Idemitsu) as the two ended up on the same bit of track and the Spaniard on a fast lap. Marc Marquez (Repsol Honda Team) then tried to follow the number 12 for a tow despite Viñales’ remonstrations, and it worked as Viñales improved and Marquez even more so tucked in behind.

That put Marquez as the rider leading the way, and Aleix Espargaro (Aprilia Racing Team Gresini) managed to push Viñales down to third and outside the graduation zone. The Yamaha rider was then on course to top the session on his final lap, but he rolled out of it despite red sectors and that leaves him down in P13 on the grid as Marc Marquez and Aleix Espargaro moved through.

Q2
Q2 fired up not long after and Quartararo was the man to beat by seven minutes in, the Frenchman on top after the first runs. Heading back out for their final shot at pole, it was again the number 20 setting the timing screens alight too. Nearly half a second clear after his final lap, the Championship leader then had to wait it out to see if anyone could better his best…

There was more to come. With Yamaha having been mighty through most the track but Ducati often enjoying the edge in the final sector, Bagnaia, Zarco and Miller seemed on course to challenge Quartararo half way round each of their laps. But at the next timing point it seemed the polesitter was set as Bagnaia dropped some tenths, then Miller and then Zarco, with too much left to make up on the Frenchman over the latter half of the lap. Still, given Quartararo’s advantage, the front row remained very much up for grabs and Bagnaia was first to take it, moving into second and cutting the advantage to only a couple of tenths.

What could Miller do? It was a solid effort but not enough to challenge his teammate, and the Australian could only manage fifth as he crossed the line. Zarco was tucked in right behind him, however, and the Pramac Racing rider shot from last in the session to third.

The Grid
Quartararo therefore starts the Gran Premio d’Italia Oakley from pole, with Bagnaia and Zarco alongside. Aleix Espargaro improved on his final effort but just misses out on the front row and will instead head the second for Aprilia on home turf.

Miller joins him there in the middle of Row 2, and with the Ducatis’ starts so far this season could still be in with a chance at the holeshot, even from there. Binder wasn’t able to quite improve on his final effort but he completes the second row in more fantastic form from KTM, who also equalled the all-time top speed record in MotoGP™ on Saturday morning with Binder. The South African has also never ridden in MotoGP™ before at this track, as the last visit was in 2019.

KTM teammate Oliveira also impressed as he takes seventh to head up Row 3, with both Suzukis alongside. Alex Rins (Team Suzuki Ecstar) is eighth and teammate and reigning Champion Joan Mir in ninth, the former showing good speed all weekend and the latter making it into Q2 directly for only the second time in 2021 – so it’s a little less work to do on race day.

Viñales is next up in P13, ahead of an impressive step forward on Saturday for top rookie Enea Bastianini (Avintia Esponsorama) in 14th. He pipped Takaaki Nakagami as the Japanese rider lost out in Q1, set to start 15th.

The Championship top three are the top three on the grid, back-to-back winner Miller has been a lightning starter and Viñales faces a fight back through the field. What will race day at Mugello bring for MotoGP™? Find out at 14:00 (GMT +2) on Sunday.

Fabio Quartararo: “This morning when I did a 45.6 and I saw Pecco was two tenths faster, I thought wow in qualifying we could get close to 44s. And yes. The first run I made a mistake on my first lap, and I feel the first lap on the tyre is good with our bike. Probably one of my best laps of all time, but I want to dedicate it to Jason. I hope we will have good news coming.”