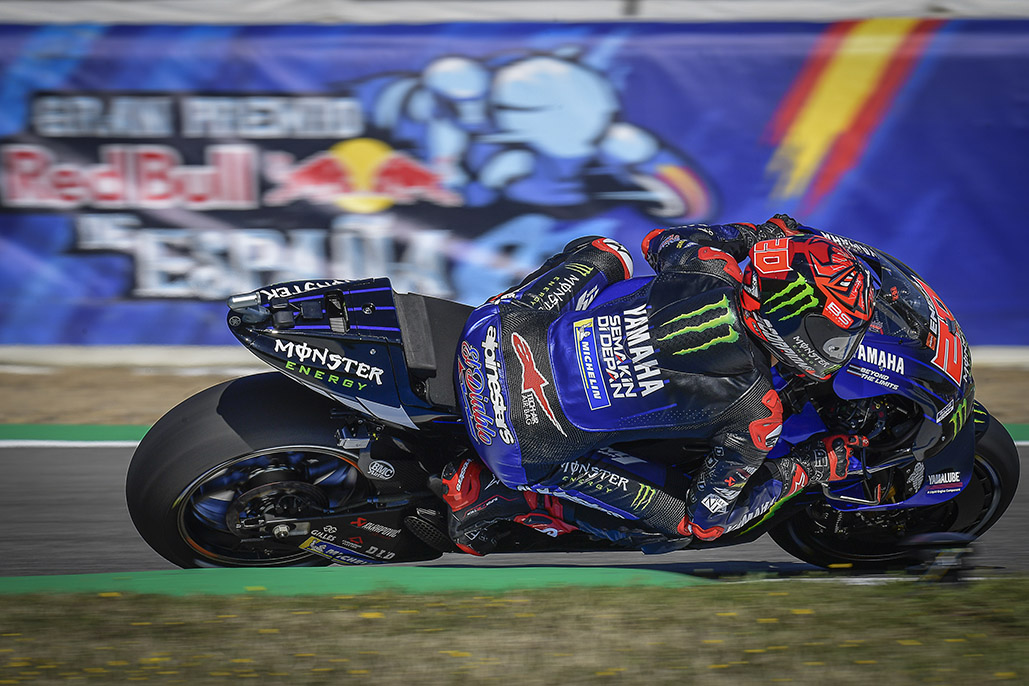 It’s four from four for the Frenchman but just 0.105 is all that splits the top three on Saturday, with some surprises further down the grid.

Fabio Quartararo (Monster Energy Yamaha MotoGP) has now taken every MotoGP™ pole position that he’s contested at the Circuito de Jerez-Angel Nieto, with this year’s Gran Premio Red Bull de España seeing the Frenchman make it a full house of four in a row since he entered the premier class in 2019 – including two last year, both of which he converted into wins. It was close as ever though, with Franco Morbidelli (Petronas Yamaha SRT) pulling a stunner out the hat to take second, just half a tenth back, and Jack Miller (Ducati Lenovo Team) taking third and with it his first front row of the year. The three are split by just 0.105.

First, however, came a blockbuster Q1 with a good few key names looking to move through – including eight-time World Champion Marc Marquez (Repsol Honda Team), Morbidelli, Brad Binder (Red Bull KTM Factory Racing) and nine-time World Champion Valentino Rossi (Petronas Yamaha SRT). Marquez found himself there after a high speed trip into the gravel in FP3 and via a double-check at local hospital, but the Spaniard was fit to contest the session and that he did.

However, neither he nor fellow frontrunner Binder had an answer for Morbidelli as the Italian got into the 1:36s, topping the session to bounce back from a late cancellation of his best lap in FP3. Binder took second and slammed past Alex Marquez (LCR Honda Castrol) at the final corner in more of a Sunday move than a Saturday one, but the South African moved through as Marc Marquez languished, suffering his worst qualifying ever in the premier class so far in P14.

Once the pole shootout of Q2 was on, it was a familiar duo at the top though: Quartararo and Morbidelli. Takaaki Nakagami (LCR Honda Idemitsu) was hanging on in third as his impressive Jerez pace continued, but Miller was on a charge and tagged onto the back of teammate Francesco Bagnaia. That would prove the key change in the final minutes as Quartararo found himself competing against only himself, shaving a little off his best but looking impervious and imperious as the Ducati duo pipped Nakagami down to fifth.

And so it’s four from four in Jerez for Quartararo now, even though the Frenchman said the lap wasn’t perfect, and it’s his former teammate Morbidelli alongside him on the front row in a familiar but now different liveried sight. Miller takes his first front row of the season in third and pips Bagnaia to the honour as the Italian is forced to settle for fourth, but both Bologna bullets will likely be huge threats once the lights go out.

Nakagami’s return to the 2020 chassis seems to be going rather well as he lines up fifth, with Johann Zarco (Pramac Racing) for company on the outside of Row 2. Maverick Viñales (Monster Energy Yamaha MotoGP) had a more muted day at the office and lines up seventh, with Aleix Espargaro (Aprilia Racing Team Gresini) and Alex Rins (Team Suzuki Ecstar) for company in P8 and P9 respectively.

Reigning Champion Joan Mir (Team Suzuki Ecstar) starts tenth despite some FP3 heroics to make a big leap up the timesheets, with more work to do on race day once again… although he’s no stranger to a podium taken from further back. Binder shook off his final corner divebomb to take P11 in Q2, and HRC test rider and wildcard Stefan Bradl impressed as ever, taking 12th.

Pol Espargaro (Repsol Honda Team) bounced back from a carbon copy of his teammate’s Turn 7 crash, and not long after him, to qualify 13th, just ahead of said teammate Marc Marquez. Rookie Enea Bastianini (Avintia Esponsorama) takes P15 as Miguel Oliveira (Red Bull KTM Factory Racing) saw himself relegated to 16th after having a lap scrubbed for track limits. Rossi starts alongside the Portuguese rider, down in P17.

Four in a row and two wins last year are quite some benchmark from Quartararo, but the points are given out on Sunday. Can the Frenchman continue his masterclasses of late, or can the fast-starting Ducatis and/or his former teammate give him a real run for his money? We’ll find out on Sunday at 14:00 (GMT+2) as the closest, most competitive era of MotoGP™ ever goes racing at Jerez once more.

Fabio Quartararo: “It feels really good, I would say that was one of the qualifying sessions where I was more on the limit, at Turn 6 and Turn 13 I thought I was going to crash and I made a mistake at Turn 6. But finally the most important thing is we have pole today, the front row was the goal so yeah, I’m happy. Let’s see what we can do tomorrow but I’m feeling good.”