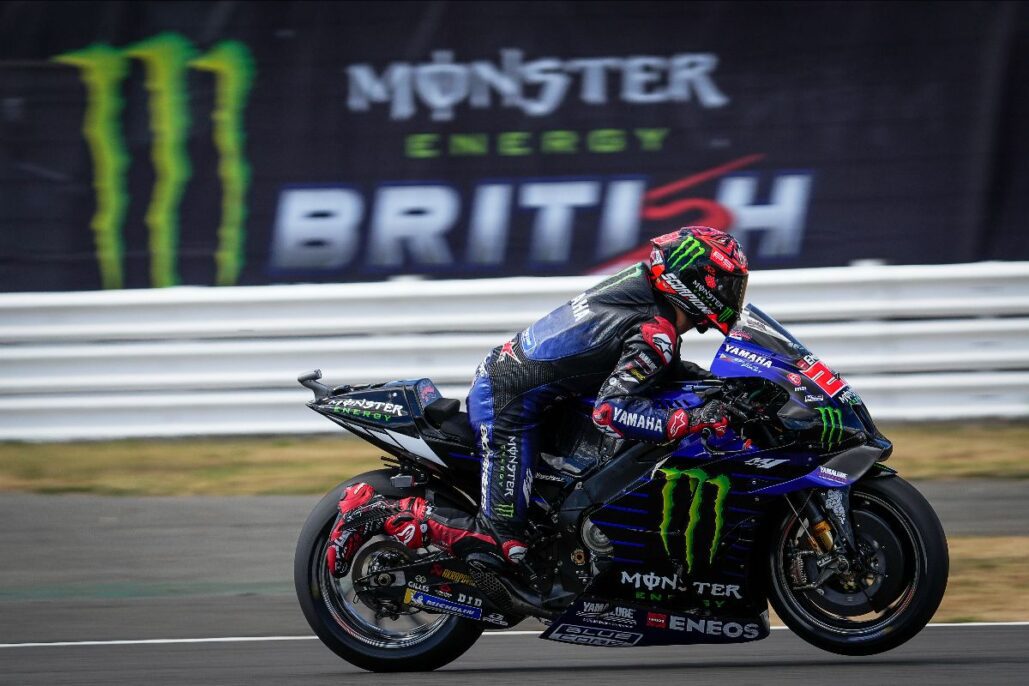 The reigning Champion blasts out the blocks first as MotoGP™ gets back on track at Silverstone.

By the end of play on Friday there was plenty to talk about at the Monster Energy British Grand Prix, with Fabio Quartararo (Monster Energy Yamaha MotoGP™) attacking late to head the timesheets from 2020 champion Joan Mir (Team Suzuki Ecstar). The top three was completed by Aprilia, with the Noale factory’s fastest assault on Friday coming from previous Silverstone winner Maverick Viñales (Aprilia Racing). Another key headlines sees Francesco Bagnaia (Ducati Lenovo Team) outside the provisional Q2 places as it stands, the number 63 ending Friday in P11 despite a quick start to the day.

Championship leader Quartararo, meanwhile, suffered a technical problem briefly, and the Frenchman tested out the Long Lap penalty loop that awaits him in the race no less than four times in FP1. He finished the session in fourth, half a second off the top, with former Silverstone winner Alex Rins (Team Suzuki Ecstar) slotting in between the number 20 and the Ducati duo at the top.

Takaaki Nakagami (LCR Honda Idemitsu) was fifth quickest ahead of Aleix Espargaro (Aprilia Racing) and teammate Viñales, the two Aprilias split by only a tenth and a half, with Mir, Jorge Martin (Prima Pramac Racing) and Brad Binder (Red Bull KTM Factory Racing) completing the top ten in FP1.

FP2
The afternoon saw fortunes change. First, after a pair of Ducatis occupied P1 and P2 in FP1, it was soon a couple of Aprilias that were sitting top of the tree in FP2 as Aleix Espargaro and Viñales got down to a 1:59.681 and 1:59.737 respectively. Quartararo and Rins ventured into the 1:59 bracket too in the early stages.

Rins was then the first rider to slot in the soft, soft Michelin tyre combination. The 2019 British GP race winner’s opening lap saw him climb to P1 by 0.330s, and his second lap was a 1:59.246 – the gap to Aleix Espargaro extend to 0.435s. But with five minutes to go, things got busy.

Mir shot up to P2 before Aleix Espargaro reduced Rins’ gap to 0.180s. Mir, on his second soft tyre flying lap, then leapt to P1 to make it a Suzuki 1-2 with two minutes left on the clock. But soon after, Quartararo took over as the pacesetter after setting the first 1:58 lap time of the weekend.

That’s how it stayed in terms of the top two, with Quartararo leading Mir. Viñales then pocketed P3 on his last flying lap, and another improver on their final push was FP1 pacesetter Zarco. The Frenchman – who crashed at Turn 7 in the morning – finished fourth, 0.188s away from his compatriot Quartararo, while Aleix Espargaro had to settle for a solid P5 on Friday.

Provisional Q2 places
All riders improved in the afternoon so the combined times are the FP2 timesheets. The top five is Quartararo, Mir, Viñales, Zarco and Aleix Espargaro, with Miguel Oliveira (Red Bull KTM Factory Racing) next up in P6.

The Portugese rider was sporting KTM’s extended exhaust and from the outside, it seems to be working a treat. He was just a couple of tenths down on P1, as Rins picks up P7 after briefly sitting top. Enea Bastianini (Gresini Racing MotoGP™), Jack Miller (Ducati Lenovo Team) – who crashed unhurt at Turn 7 in FP2 – and rookie Marco Bezzecchi (Mooney VR46 Racing Team) occupy the final, provisional Q2 spots.

That means that Bagnaia, despite the Italian sitting second fastest after the opening Free Practice session, has work to do to try and gain an automatic Q2 place. The Italian is 11th heading into the all-important FP3 session on Saturday morning… although the skies look like they’ll stay dry.

See if Bagnaia can move through as the premier class head back out at 9:55 (GMT +1), before qualifying decides the grid for the Monster Energy British Grand Prix from 14:10! 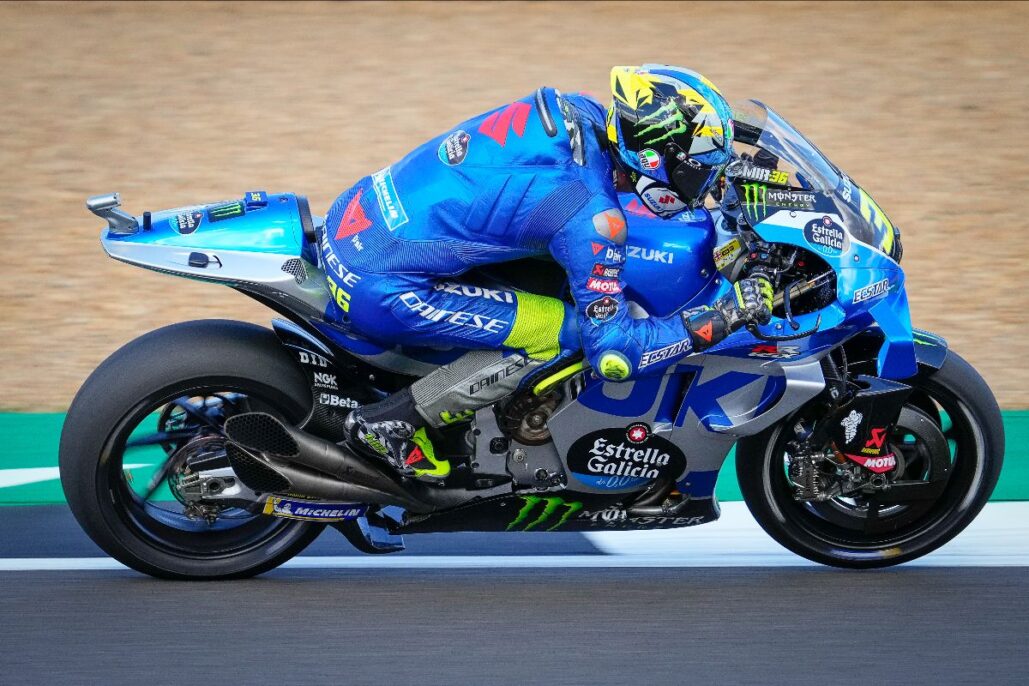 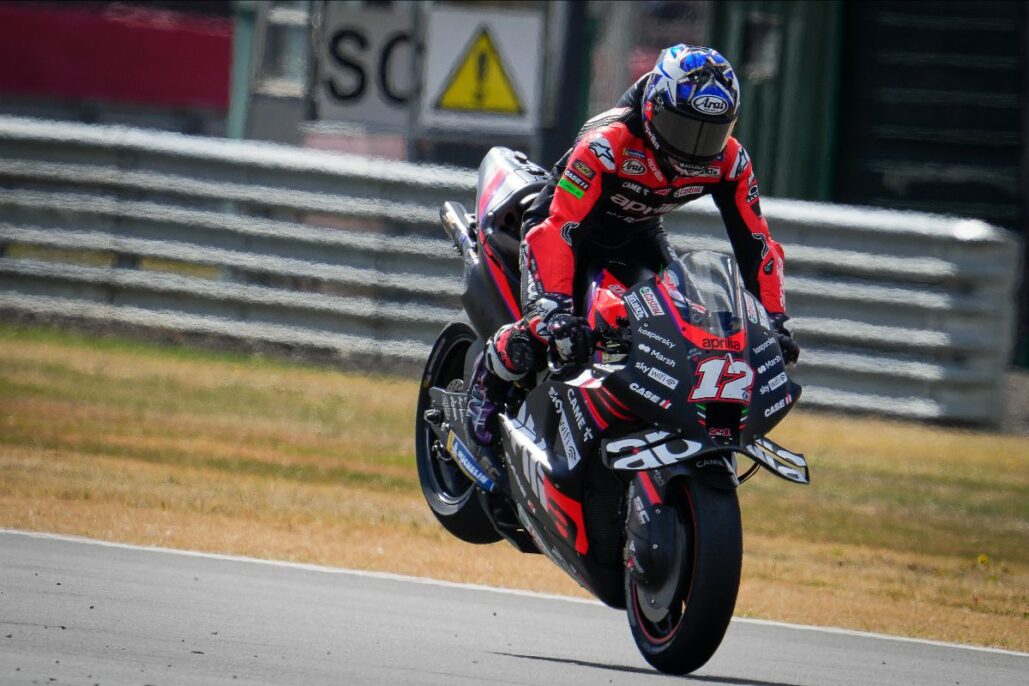 Guintoli Confirmed Out Of Suzuka 8 Hours After Test Accident

The Motorbike Show turns it up to 11

Vietti, Canet and Roberts get the weekend off to a triumphant start

Silverstone welcomes MotoGP back for another showdown