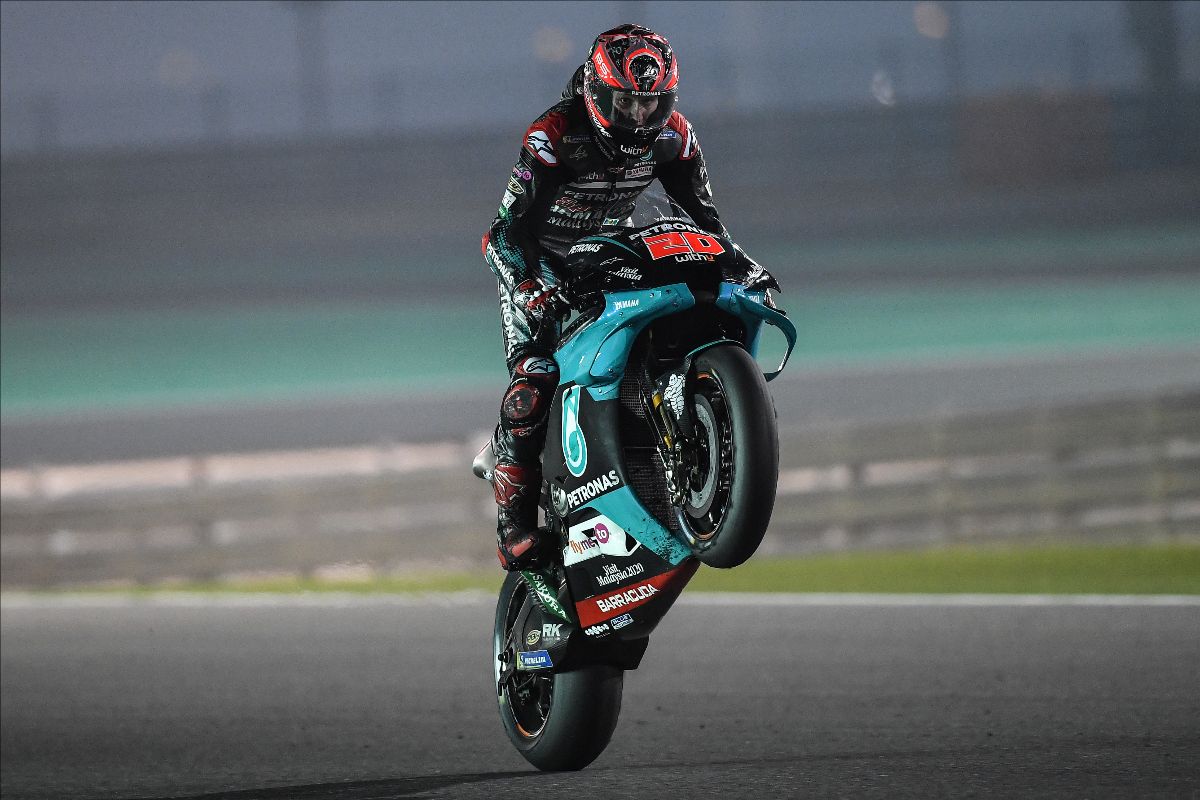 Frenchman faster than 2019’s quickest lap in testing, with Rins in hot pursuit.

Fabio Quartararo (Petronas Yamaha SRT) set the fastest lap of the Qatar Test to top the timesheets on Day 2 with a 1:54.038, the Frenchman going a couple of tenths faster than the laptimes we saw at the event last season. Day 1 pacesetter Alex Rins (Team Suzuki Ecstar) was 0.162 in arrears in second, with Maverick Viñales (Monster Energy Yamaha MotoGP) completing a top trio split by 0.226 as Yamaha and Suzuki continue to look very strong.

In the Yamaha camp, the timesheets make for positive reading. Quartararo shot to the top with just over an hour and a half of Day 2 remaining with the best time of the test, with Franco Morbidelli (Petronas Yamaha SRT) claiming P4 and Valentino Rossi (Monster Energy Yamaha MotoGP) sitting P9. Quartararo commented that he had a better day than he did on Saturday, despite the Iwata factory having a couple of issues with engine braking. But things seem positive from the likes of Viñales – tipped by a couple of riders as the man in the best shape as it stands – and all the Yamahas are inside the top 10. Rossi stated they’re ready, too.

At Team Suzuki Ecstar, meanwhile, Alex Rins and Joan Mir both had a bumpier ride on Day 2 after proving the men to beat on Saturday, with crashes for both, riders ok. Nevertheless, the two Spaniards looked in good shape on the whole as they continued to test the new GSX-RR chassis, as well as some electronic, rear shock and new Michelin tyre testing. Rins put it simply: “We are ready”, with the Hamamatsu factory sounding confident ahead of the Qatar GP. Mir was seventh, his fastest lap a 1:54.612.

In the red corner, there was a little more caution but some positivity too. Ducati Team rider Andrea Dovizioso said they were in better shape than Malaysia and teammate Danilo Petrucci said he’d also had a better day than Saturday as they continue to focus on their programs rather than chasing a laptime. Dovizioso was eighth with a 1:54.662, Petrucci P12 with a 1:54.852.

The revolutionary “ride height adjuster” was a talking point again, with Jack Miller (Pramac Racing) admitting that he’d been using the device for a number of races. The Australian also noted the GP20’s superior top speed, describing it as a “rocketship”. In terms of the timesheets, however, Francesco Bagnaia (Pramac Racing) was the leading Desmosedici, the sophomore briefly sitting P1 with two hours remaining and eventually finishing up P5. In terms of race pace though, ‘Pecco’ says he needs “five tenths” to stick with the lead guys and he’s looking for more grip on the exit.

Over at Honda, reigning World Champion Marc Marquez (Repsol Honda Team) suffered a crash at Turn 9 and ended the day in P14, a second off the top. Thankfully he was unhurt. Cal Crutchlow (LCR Honda Castrol) also crashed, going down at Turn 2 and heading to the medical centre afterwards. The fall ultimately ended Crutchlow’s day, the number 35 suffering swelling to his forearm. He and the team decided it was best to not ride again on Sunday, hopefully he will be on track on Monday for the final day of testing.

Front end feel for the two experienced riders is the main problem, with rookie Alex Marquez (Repsol Honda Team) also experiencing some issues. The reigning Moto2™ World Champion has been feeling under the weather at the Qatar Test but he was happier with how Day 2 went compared to Day 1. And it was Takaaki Nakagami (LCR Honda Idemitsu) ended the second day as the fastest Honda rider in P10, the Japanese rider enjoying a decent day as he continues to recover from shoulder surgery, with the injury feeling better than it did on Day 1. All in all, a big Day 3 lies ahead for the HRC riders.

There was big news on Sunday for Aprilia as they confirmed Lorenzo Savadori as their new MotoGP™ test rider. And for Aleix Espargaro (Aprilia Racing Team Gresini), Day 2 targets were working on electronics and setting up the engine, as well as trying to figure out why the new RS-GP started suffering in the cooler temperatures – vital for race day in Qatar. And by the sounds of it, Espargaro found something in the cooler temperatures, describing his feeling as “extremely good” at 7pm. The Spaniard did have a crash on Sunday at Turn 4 though, but thankfully he was ok.

At KTM, it seems the four riders are pretty much set on the new fairing they’ll be using. Pol Espargaro (Red Bull KTM Factory Racing) admitted they haven’t been going for an outright lap time so far in Qatar, the Spaniard was P13 on the timesheets on Day 2 – 0.852 shy. Working on the new Michelin rear tyre was a must today for the Austrian factory and speaking after Day 2’s action, Red Bull KTM Tech 3 rookie Iker Lecuona said he was really happy after he completed a race simulation. His teammate Miguel Oliveira took a tumble, rider ok, and the two weren’t far apart on the timesheets. Brad Binder (Red Bull KTM Factory Racing) was another to crash, rider ok.

That’s it from Day 2 – tune in on Monday for more on After the Flag and follow Live Timing on motogp.com!