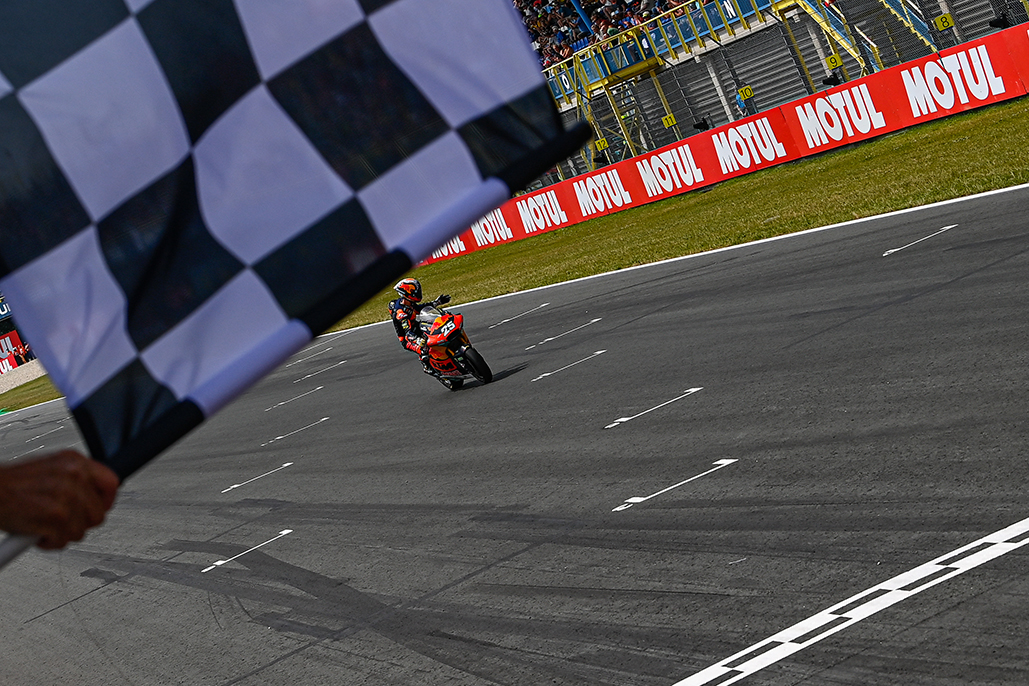 The Spaniard gains a little ground on teammate Gardner as the Australian takes second, with Augusto Fernandez back on the rostrum in third.

Raul Fernandez (Red Bull KTM Ajo) heads into the summer break on a high after a hard-fought win at the Motul TT Assen, the Spaniard recovering from the latter half of the top ten to get back to the front and then pull away from the fight to complete the podium. That fight was won by his teammate Remy Gardner as the Australian did some good damage control to hold off Augusto Fernandez (Elf Marc VDS Racing Team). With third place, the Spaniard nevertheless took his first podium since 2019 after a weekend of great form.

Aron Canet (Aspar Team Moto2) took the holeshot ahead of Raul Fernandez, but Gardner muscled through on his teammate too as the number 25 got shuffled back. Lowes made quick work of moving back forward as he got up into second behind Canet, striking for the lead not long after but the Spaniard taking it back. Gardner was next on the charge as he picked his way through into the lead and Lowes followed, with Raul Fernandez then running off and dropping all the way back to ninth…

That left Ai Ogura (Honda Team Asia) making his presence felt at the front in fourth as Augusto Fernandez found himself looking for a way past the Japanese rider, but soon enough the number 37 was able to start pulling away with Gardner and Lowes, as Raul Fernandez started his fight back towards the podium battle.

The number 25 was on a charge and once in some clear air on the chase, his was reeling them in on his mission back to the front. Once there, he sliced back through past Gardner and the Elf Marc VDS Racing Team duo back into the lead and soon, the number 25 had the hammer down to pull away.

That left a Gardner-Lowes-Augusto Fernandez showdown to decide the podium, with Lowes still heading the train with four to go. But over the line next time around his teammate pulled alongside and made his move, with Gardner leaving it two apexes longer before picking the Brit’s pocket too.

Onto the penultimate lap, Gardner was lining up a move for second and he struck at the end of the lap. Slicing through at the Geert Timmer chicane, the move was super clean as the Australian lost little momentum, then shutting the door as he withstood the pressure from Augusto Fernandez the remainder of the lap. The number 37 couldn’t make it through, however, with Gardner able to have enough in hand to head through the final chicane unbothered, taking second place and another 20 points. Augusto Fernandez got back on the podium in third after a tough start to the season, with Lowes forced to settle for fourth as the Brit just dropped off the back of the duo on the latter half of the final lap.

Raul Fernandez, however, made it another masterclass on Sunday for another 25 points. Over a second and a half clear once he’d escaped the squabble, the Spaniard continues to impress and pulled in five points on Gardner.

Marco Bezzecchi (Sky Racing Team VR46) took fifth after an impressive ride back from P17 on the grid, ahead of Ogura as the Japanese rider took P6 and another impressive rookie result. Jorge Navarro (+Ego Speed Up) took seventh.

Now it’s time to reset, reload and maybe relax as the summer break awaits, before Moto2™ return to action at the Red Bull Ring in August.

Raul Fernandez: “It was an amazing race, I am destroyed. At the beginning I did two very bad laps, I held on but lost too many positions. Later I had a recovery. It was a really difficult and mental race. I want to say thanks to my team, they have brought me an incredible bike and in the last part of the race I was really, really strong, and this victory is for the big brother of Heinz Kinigardner, who is in the hospital, because I want to send my support to him. See you in the next races.”