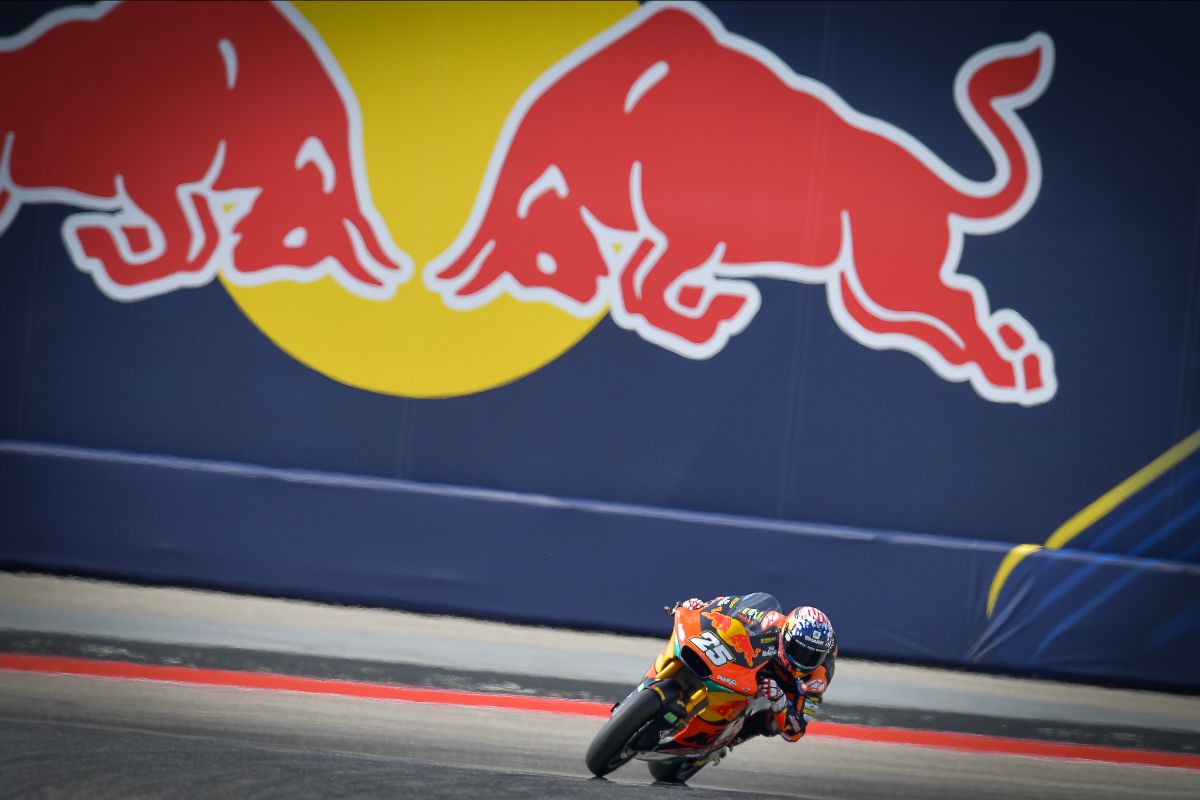 The top two in the standings remain the top two on the timesheets, but Fernandez keeps the upper hand on speed

Raul Fernandez and Championship-leading teammate Remy Gardner made it another Red Bull KTM Ajo 1-2 on Friday at the Red Bull Grand Prix of the Americas, the rookie sensation two tenths clear of the Aussie veteran… and the duo with a nice buffer in hand over Sam Lowes (Elf Marc VDS Racing Team) in third. Business as usual? It may be and in the best way, with the two seeming set for another awesome showdown at COTA.

FP1
It was a damp start to FP1 with Somkiat Chantra (Idemitsu Honda Team Asia) and Fermin Aldeguer (MB Conveyors Speed Up) enjoying some headlines, but by the end Raul Fernandez had got himself acquainted with the Circuit of the Americas on a Moto2™ bike and the Spaniard beat Bo Bendsneyder (Pertamina Mandalika SAG Team) by 0.197s. Fernandez’ 2:13.589 was set on slicks, the early morning rain clearing to allow the field to push, with American Racing’s Marcos Ramirez claiming P3.

There were no crashes, but there were a couple of technical gremlins for Jorge Navarro (MB Conveyors Speed Up).

FP2
Right from the get-go in the dry, Raul Fernandez was the pacesetter. The Spaniard sat 0.7 clear of the chasing pack with just under 30 minutes of FP2 to go, and it wasn’t until Lowes briefly went top in the final 10 minutes that there was a real challenge to his dominance. On his next flying lap, however, the number 25 went back to 0.6 clear of Lowes, setting down another marker.

Gardner shaved Fernandez’ advantage down to 0.199s, but that’s as close as anyone got on Day 1. Lowes is another four tenths down on Gardner, with rookie Tony Arbolino (Liqui Moly Intact GP) a fantastic fourth, 0.7 away from P1.

Misano podium finisher Aron Canet’s (Inde Aspar Team) 2:10.709 put the Spaniard in P5 on his first visit to COTA on a Moto2™ machine, with Augusto Fernandez and Simone Corsi (MV Agusta Forward Racing) the only other two riders – in P6 and P7 – to get within a second of Fernandez…

Navarro suffered another technical in the afternoon, but there were no other incidents.

Combined timesheets
With the conditions so much better in the afternoon, the FP2 timesheets are the combined, so it’s Raul Fernandez, Gardner, Lowes, Arbolino, Canet, Augusto Fernandez and Corsi in that bracket of a second off the top, with Dixon slotting in P8 on Day 1.

Marco Bezzecchi (Sky Racing Team VR46) was P9 and just under half a tenth off Dixon, with Schrötter completing the top ten just a further 0.006 in arrears.

Ramirez, Xavi Vierge (Petronas Sprinta Racing), Ai Ogura (Idemitsu Honda Team Asia) and Beaubier are the final riders on for a provisional place in Q2, with FP3 making the final decision on that on Saturday morning.

One rider who’ll be keen to move up is Joe Roberts (Italtrans Racing Team), down in P21, as he looks for more on home turf. Tune in for FP3 and then make sure to see the grid get decided for the Moto2™ race, with qualifying from 15:10 (GMT -5).