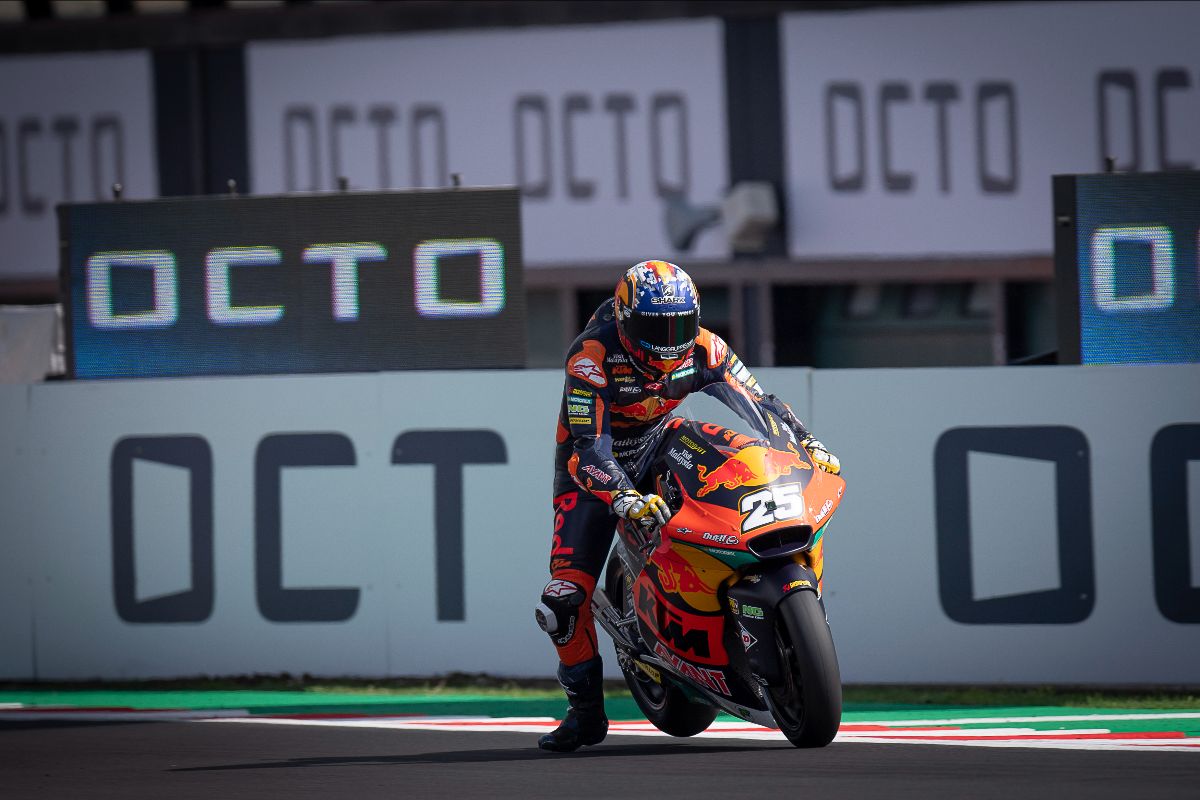 The Red Bull KTM Ajo rider is the first debutant since Marc Marquez to take five or more poles in Moto2™.

Raul Fernandez (Red Bull KTM Ajo) keeps impressing and the rookie again took pole at the Gran Premio di San Marino e della Riviera di Rimini, the first since MM93 to take five or more in a rookie Moto2™ season. He’s joined by Sam Lowes (Elf Marc VDS Racing) in second, with Lowes’ teammate and man on form Augusto Fernandez taking third – back on the front row for the first time since 2019. Given his recent run of podiums, that could be a warning shot.

There were no crashes, a low drama session despite the stakes.

Q2
It was dry enough to push and P1 changed hands a number of times as the clock ticked down towards zero, with Raul Fernandez and his teammate, Championship leader Remy Gardner, trading fast laps with Aron Canet (Inde Aspar Team) and Fabio Di Giannantonio (Federal Oil Gresini Moto2). But with four minutes remaining, it was Brit Lowes who had just fired himself to the top of the timesheets as he zeroed in on consecutive poles.

Shortly after, Jorge Navarro (+Ego Speed Up) tried to get in on the front row fun, but his effort was quickly knocked back by Gardner and Canet, with the Spaniard pulling off a brilliant save seconds after recording a personal best time. Then it was Augusto Fernandez’ turn to crash the party, slotting in just behind Lowes to make it a Marc VDS one-two as riders began to take the chequered flag.

The session wasn’t just over yet though, with Raul Fernandez lighting up the screen with red sectors as he obliterated what was the time to beat, securing a fifth pole position of the season.

The Grid
Fernandez – R heads the grid from Lowes and Fernandez – A, with that already poised for a stunner. Gardner then heads up Row 2, sure to fight it out again, joined by Canet and Navarro in P5 and P6 respectively.

Xavi Vierge (Petronas Sprinta Racing) and home hero Marco Bezzecchi (Sky Racing Team VR46) are next up, with Di Giannantonio leaving it late to post his best lap and take P9 on Row 3. The Italians know success on home turf and will want plenty more, likewise Q1 graduate Dalla Porta as completes the top 10 after a good Saturday at Misano.

The scene is set with the timesheets back to something we’re more accustomed to in 2021… but who will lock out the Moto2™ podium? Raul Fernandez could wrap up Rookie of the Year too, so make sure to tune in at 12:20 (GMT +2)!

Raul Fernandez: “This morning was a nice morning, the feeling with the bike was incredible. Today when I saw the rain before qualifying I said, ‘no, please’, but I’m really happy to get another pole. Really happy, this morning today with my hand was difficult because I couldn’t so more than five laps how I want, and with the Clinica I worked hard, I’m happy to be here on track and impressive pole! Another, this is incredible in my rookie season and I want to say thanks to my team because t’s incredible to work with them. Thanks to them and to my family.”