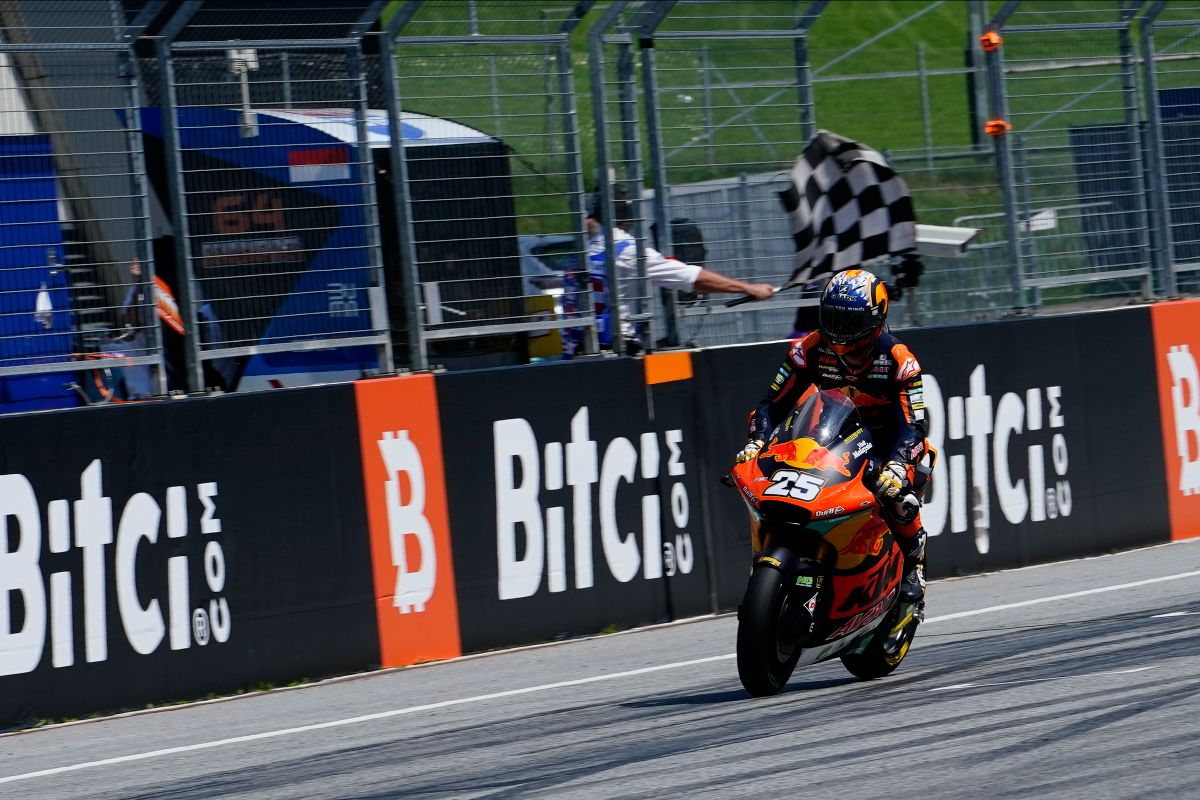 A rookie 1-2 stormed Spielberg, with Raul Fernandez making big gains in the standings and Ogura taking a first Moto2™ podium

Sam Lowes (Elf Marc VDS Racing Team) took the holeshot from pole, just about able to fight off Raul Fernandez as the rookie looked for a way through. Ogura slotted into third from the front row, with Augusto Fernandez for close company… so an as-you-were for the top four on the grid.

One rider who didn’t get the best start was Championship leader Gardner, getting shuffled out at Turn 1, whereas Styrian GP winner Bezzecchi did the opposite. Despite starting 11 places apart, two of the big players in the title fight were close together on track after a handful of laps, fighting over ninth.

Raul Fernandez, meanwhile, had hit the front, and not long after that Ogura struck to take second from Lowes at Turn 3. Augusto Fernandez was the next to attack the Brit at the same place, moving through on his teammate into third

As the laps ticked on, Raul Fernandez, Ogura and Augusto Fernandez were able to start making a gap back to Lowes, Marcel Schrötter (Liqui Moly Intact GP) crashed out of the top five and Celestino Vietti (Sky Racing Team VR46) and Somkiat Chantra (Idemitsu Honda Team Asia) were holding off Styrian GP podium finisher Aron Canet (Aspar Team Moto2)… with quite a gap back to Gardner.

The Australian, in turn, had made his escape from Bezzecchi, pulling away from his key rival and then homing in on Canet. The two went toe to toe but Gardner was able to make it stick. So Fernandez 25 led Ogura led Fernandez 37 at the front, Lowes was just about hanging on in fourth and Chantra vs Vietti raged on for fifth, with the gap back to Gardner likely too much by that point for the points leader to really dent.

As the laps couple of laps started, Ogura was really homing in. The Japanese rider got to within a couple of tenths of the Red Bull KTM Ajo in the lead, and seemed to be readying a move. But Raul Fernandez responded, just finding enough to stay ahead, crossing the line eight tenths clear to make some big gains in the standings. Ogura didn’t quite manage the win, but he did get his first Moto2™ podium a week on from being so close, the top two in Austria two rookies to boot.

Augusto Fernandez was able to pull out some space for a comfortable third, but teammate Sam Lowes took P4 and a good haul of points after disappointment last week with a run off. And then came the duel of the day…

It was a classic final corner move that decided it, with Vietti screeching through on Chantra and the two almost neck and neck over the line. But Vietti took it by 0.068… or did he? The Italian had actually exceeded track limits on the final lap, and was demoted a position. So Chantra takes fifth, his best Grand Prix finish to date, denying Vietti his standalone best Moto2™ finish to date. But the Italian does still equal that, with two sixths his best in the intermediate category so far.

Gardner took a lonely seventh, with Canet in some space in P8 too. Tom Lüthi (Pertamina Mandalika SAG Team) had a solid day’s work on close-to home turf, the Swiss veteran passing Bezzecchi and not far behind Canet by the flag. The aforementioned Bezzecchi ended his tough day in Austria in 10th.

That’s it from the Red Bull Ring! And what a swing it was. Gardner is now only 19 points clear at the top, with Silverstone next up… so many sure to tune in for more from the British GP!

Raul Fernandez: “First, thanks to my team because they gave me the best bike for this situation, especially today it was a hot race, and really difficult, all the race with Ogura at the same time, it was difficult for me like that one week ago but they brought me what I needed to fight with them. Thanks to my team and my family, and especially to all the haters who said a week ago I’d never get another podium. Now I’m here with a victory… this is for all of you.”