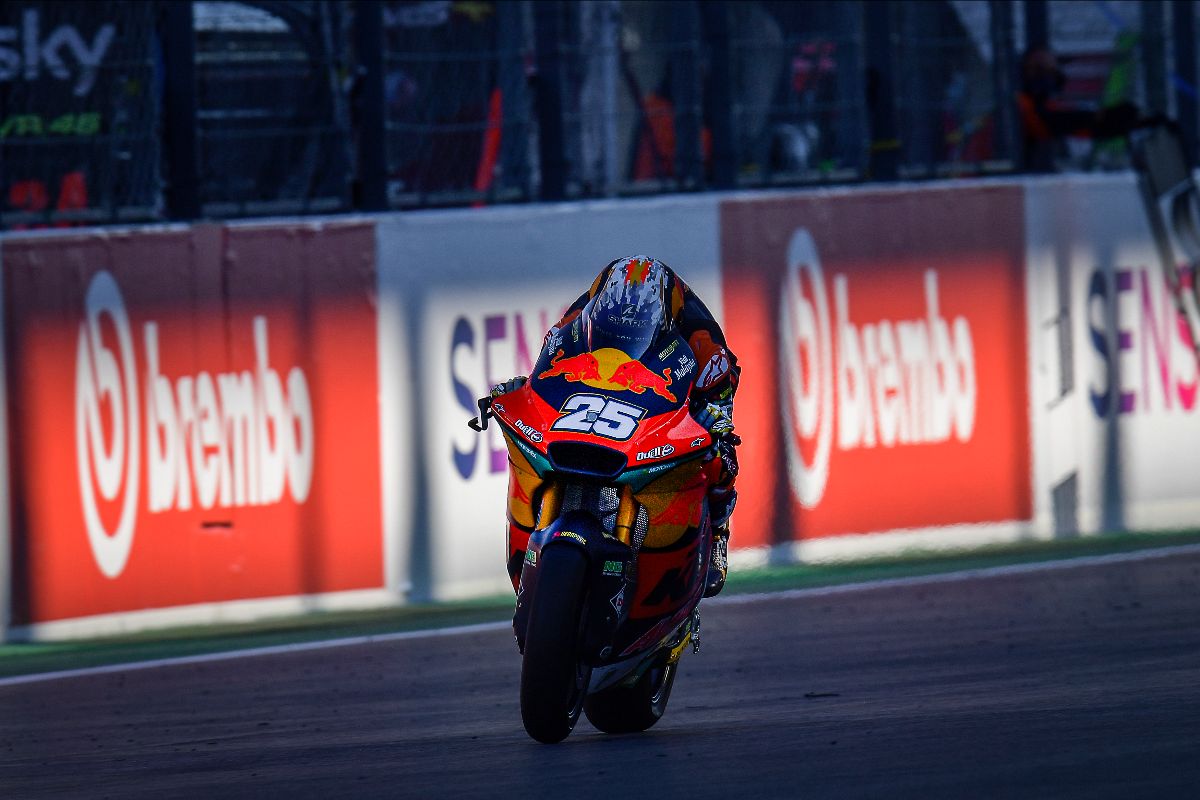 The rookie head the veteran on Day 1, with the Championship leader third but showing good pace despite a clash in FP2

Raul Fernandez (Red Bull KTM Ajo) finished top of the pile on Day 1 at the Grande Prémio Brembo do Algarve, but only just. Sam Lowes (Elf Marc VDS Racing Team) was just 0.002 off the Spaniard’s 1:43.246 by the end of play, with the Brit continuing his Misano momentum. World Championship leader Remy Gardner (Red Bull KTM Ajo) was third quickest and quick all day, but the Australian suffered some late drama at the final corner when he crashed with Marcos Ramirez (American Racing). Riders ok, the incident was investigated and no further action was taken.

FP1
It’s all about the Red Bull KTM Ajo duo in terms of the Championship, with Gardner holding his first match point this weekend. The duo – as ever – looked strong, finishing 1-2 in FP1 in the Australian’s favour… but by just 0.014. Aron Canet (QuieroCorredor Aspar Team), rookie Celestino Vietti (Sky Racing Team VR46) and Hector Garzo (Flexbox HP40) locked out the top five in the opening session.

FP2
Gardner was fastest in the early stages before Raul Fernandez hit back, with Lowes also able to split the duo by the flag. Gardner had a big wobble late on and then suffered the incident with Ramirez, although both riders were up and ok it was a tougher end to the day. Still, Gardner is just 0.122 off his teammate heading into FP3.

The high profile incident for the points leader was the only one of the session.

Combined timesheets
Behind Raul Fernandez, Lowes and Gardner, Jorge Navarro (Termozeta Speed Up) made good progress in the afternoon to finish P4 on Day 1, up from P13 in Fp1. He was just 0.004s away from Gardner too. Ogura crashed in FP1 but was in fine form in FP2 to claim P5, the Japanese rider only 0.001s ahead of Canet.

After late drama for Gardner and smooth sailing for Raul Fernandez, don’t miss Moto2™ FP3 at 10:55 local time (GMT) on Saturday before qualifying from 15:10.