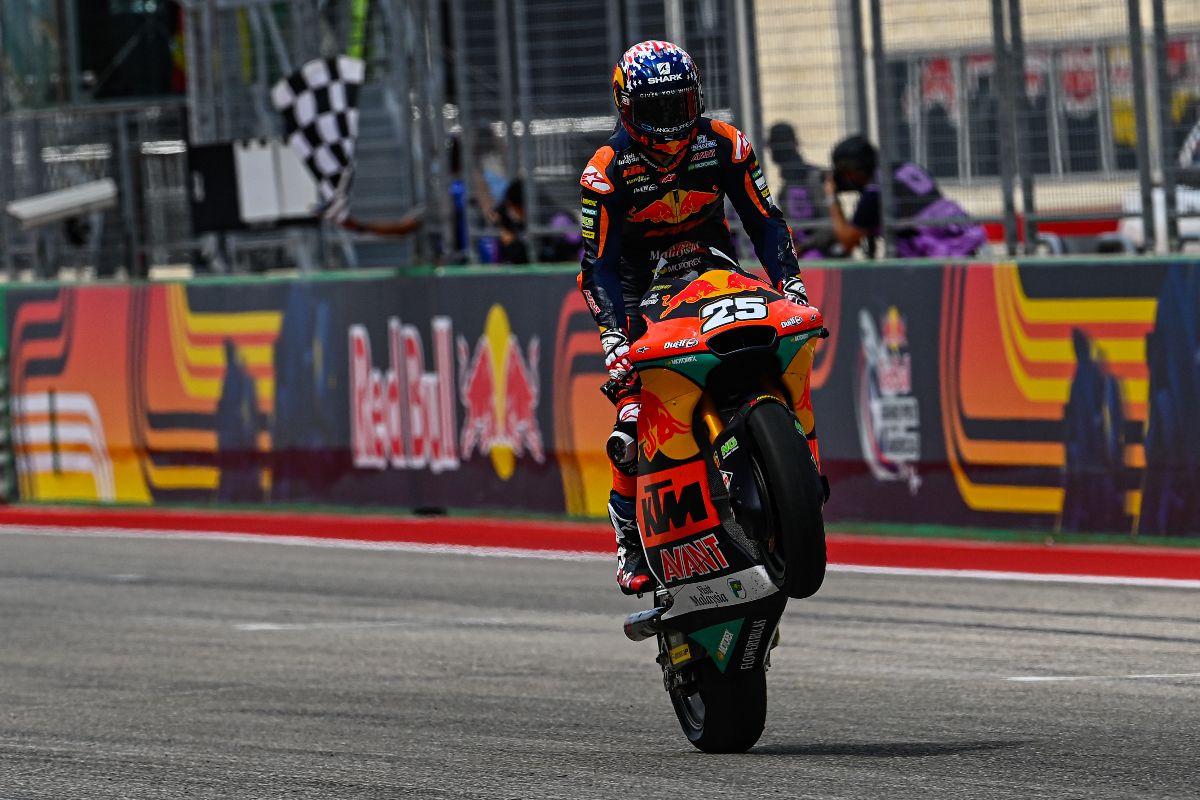 The rookie matches a Marquez record as the Aussie slides out, leaving just nine points between the Red Bull KTM Ajo duo at the top.

Raul Fernandez (Red Bull KTM Ajo) took a magnificent seventh win of the season in the Red Bull Grand Prix of the Americas, matching Marc Marquez’ record of seven wins as a Moto2™ rookie. The 25 points – and the continued steamrolling performance – also see him gain big on teammate Remy Gardner in the title fight, with the Australian sliding out in his first and only mistake of the year so far. Fabio Di Giannantonio (Federal Oil Gresini Moto2) came through for second as he took a step back forward in Texas, with Marco Bezzecchi (Sky Racing Team VR46) taking third.

To the delight of the home crowd, Cameron Beaubier (American Racing) led into Turn 1 from the middle of the second row, but the Moto2™ rookie was in hot which allowed Gardner to swoop through into the lead. Raul Fernandez was soon P1 though, as Gardner then dropped to P4 after getting a miserable run out of the final corner heading onto Lap 2. Beaubier and Di Giannantonio were up to P2 and P3, but Gardner fought back by Lap 4.

Raul Fernandez was a second and a half up the road from Gardner, as drama unfolded for the latter. On Lap 6 at Turn 15, Gardner made his first major mistake of 2021. The Australian tucked the front and was unable to restart his machine, meaning the title race leader would score a DNF for the first time this season… but would his teammate get the job done?

Yes. With 10 laps to go, Raul Fernandez held a 1.7 lead over Di Giannantonio and no had could stop the rookie sensation from taking a monumental victory at COTA. The number 25 has been outstanding all weekend in Austin, and his latest win – coupled with Gardner’s DNF – means the Moto2™ title race is raging with three to go, jut nine points in it.

Di Giannantonio escaped the clutches of the battle for P3 between Bezzecchi, Beaubier and Tony Arbolino (Liqui Moly Intact GP), and Beaubier and Arbolino then lost touch with Bezzecchi, with Augusto Fernandez (Elf Marc VDS Racing Team) the swooping through to get the better of the pair.

Di Giannantonio sailed home for second and a welcome return to the podium, ahead of Bezzecchi. Augusto Fernandez clawed his way back up to P4 and then finished just 0.9s off Bezzecchi, and in fifth came the home hero. Beaubier capped off a phenomenal home Grand Prix with his best Moto2™ result yet, showing his experience and talent at a difficult but familiar track.

After a seismic shift at COTA it’s now just nine points between the top two, and next up it’s Misano… where we saw an incredibly close finish not too long ago. What will the Emilia-Romagna GP bring? We’ll find out soon enough… come back for more in the few weeks.

Raul Fernandez: “Amazing. It was a really difficult race for the temperature, it was difficult to have a good feeling with the bike but we worked well during the weekend, and I’m very happy. This victory is for Dean, I have his number or he had mine, it’s for all of his family.””