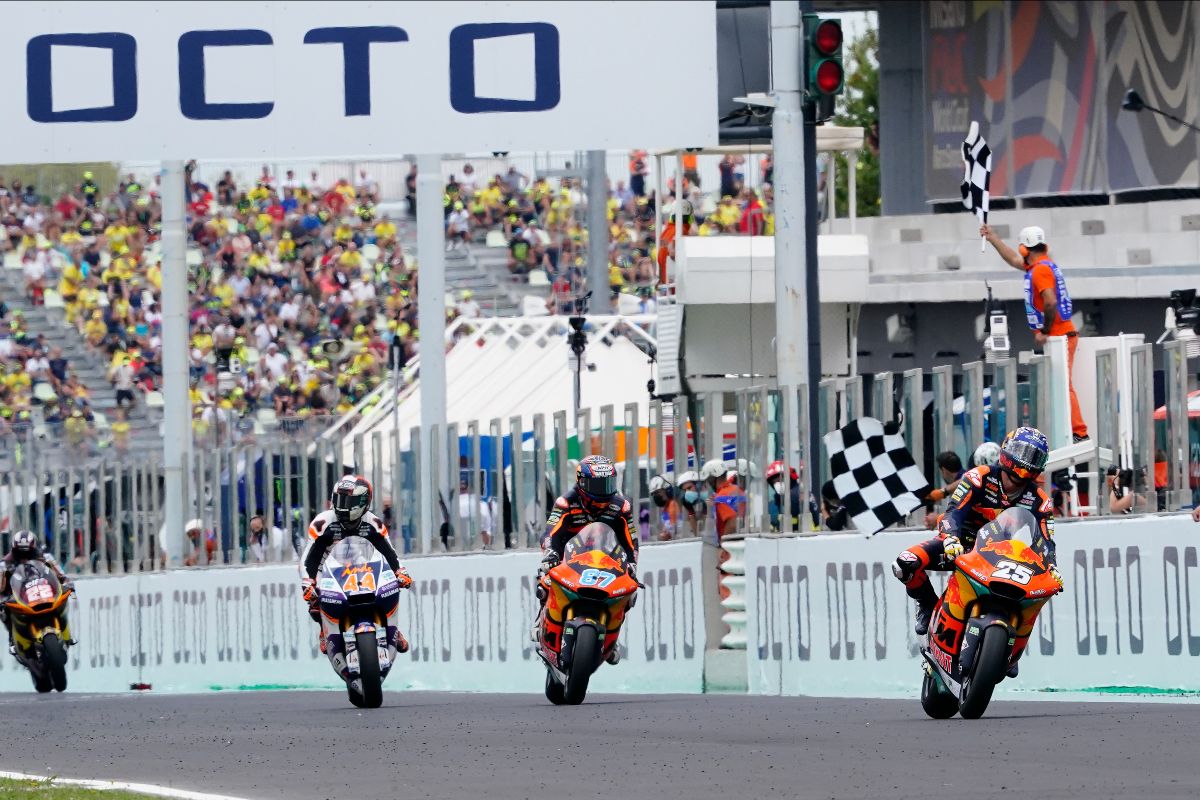 Raul Fernandez (Red Bull KTM Ajo) put in another stunner at Misano World Circuit Marco Simoncelli, taking his sixth win of the season and securing Rookie of the Year. But it was a pretty close run affair, with teammate and Championship leader Remy Gardner (Red Bull KTM Ajo) taking second and four tenths off, hindered by a moment on a last lap charge for victory. Aron Canet (Inde Aspar Team) fought at the front throughout too, coming home well in sight of the win and taking third for another podium in 2021.

Any hopes Raul Fernandez had of an instant breakaway win after taking the holeshot were quickly dashed, going wide at Turn 9 as he tried to fight off a challenge from Sam Lowes (Elf Marc VDS Racing Team), but the Brit nudged ahead and led at the end of the first lap. There were also strong starts from Canet, Xavi Vierge (Petronas Sprinta Racing) and Marco Bezzecchi (Sky Racing Team VR46) as they occupied the top five spots, with Gardner and front row starter Augusto Fernandez (Elf Marc VDS Racing Team) dropping a little further down the field.

After four laps, the race lost Simone Corsi (MV Augusta Forward Racing) after an incident with Jorge Navarro, which earned the +Ego Speed Up rider a Long Lap penalty. But back at the front, Canet got the gloves off as he moved ahead of Raul Fernandez and set a race lap record in the process, while he soon had Lowes’ number to boot. A mistake from the Brit then let the number 44 through for the lead and Lowes dropped to third, with Gardner working his way back into the top four.

As the laps were chalked off, the front four formed a breakaway group and the Red Bull KTM Ajos began to find some pace, with Raul Fernandez eating away at Canet’s advantage until he eventually made what would prove the race winning overtake on Lap 15 at Turn 1. That prompted Championship leader Gardner to take action, the Aussie making his move on the outside of Lowes at the same corner.

Some small specks of rain threatened but it didn’t affect the on-track action, with Raul Fernandez soon responding to pressure from Canet with the first ever 1:36 lap around Misano. Despite his impressive speed, he couldn’t shake off the close attention of the men in P2 and P3 though.

In the closing laps, the number 25 looked like he’d finally pulled the pin and he extended his lead to nearly a second, but Gardner wasn’t done. Disposing of Canet on the penultimate lap, the Australian then began taking huge chunks out of his teammate’s time and we were set for a grandstand finish. The gap was down to less than half a second, and with a track limits warning not helping matters for Raul Fernandez it was game on.

Gardner was pushing to the absolute limit and setting up a move, but the decisive moment came at Turn 11. A wobble – at the scene of a crash last year – forced him from attack to defence, but he clung onto P2 and 20 crucial Championship points. Canet was forced to settle for third but took another podium, with Lowes fading slightly to fourth as Raul Fernandez took his incredible sixth win of the season.

Home hero Bezzecchi, on his fabulous pink-liveried machine, headed what had been a hard-fought group, the Italian holding off front row starter Augusto Fernandez as the number 37 was forced to settle for sixth. Ai Ogura (Idemitsu Honda Team Asia) got right in that mix fighting for fifth and ultimately took seventh.

Vierge was a little further back in P8, but had some seriously close company from Fabio Di Giannantonio (Federal Oil Gresini Moto2) as the two crossed the line split by less than a tenth. Celestino Vietti (Sky Racing Team VR46) made some good progress up to tenth on Sunday.

It remains a Red Bull KTM Ajo show in the intermediate class as the paddock now heads for the Circuit of the Americas. 34 points is the gap and the battle remains very much on… who will hit the bullseye in Texas?

Raul Fernandez: “It was a really difficult race, again today I couldn’t sleep Saturday night, but I’m really happy. We worked hard this morning in Warm Up, it was really difficult because the track was different to yesterday and I didn’t have grip. But I got another victory, it’s incredible and I want to say thanks to my team, they gave me an incredible bike again, my family, Clinica Mobile because I worked really hard with them, today the hand was difficult. I didn’t know how I was braking or not, but we did it again and thanks to everyone, it’s incredible. And I can now say I’m Rookie of the Year as well and I’m really happy!”