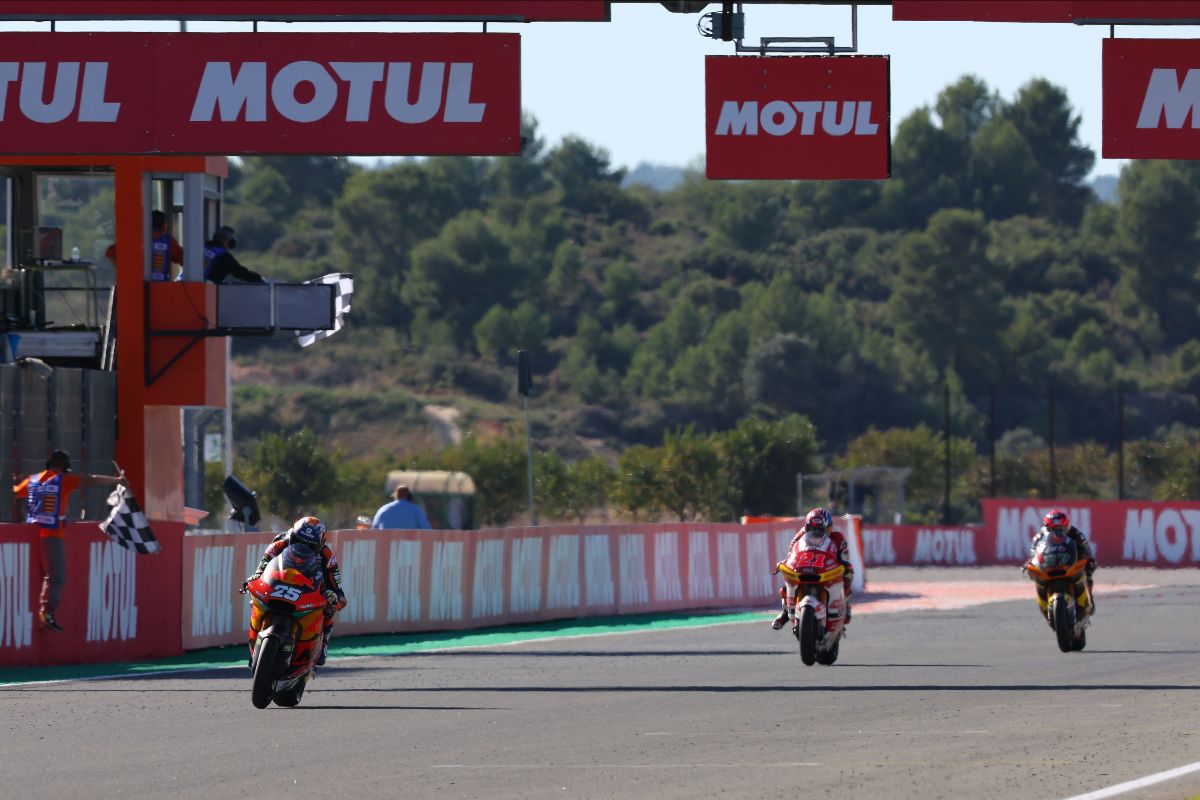 Raul Fernandez wins the race, Gardner wraps up the title in a classic Moto2™ finale.

The Moto2™ title decider got underway but a crash involving Marco Bezzecchi (Sky Racing Team VR46), Xavi Vierge (Petronas Sprinta Racing) and Lorenzo Baldassarri (MV Agusta Forward Racing) brought out the red flags, with an oil spillage occurring between Turns 2 and 3. All riders were ok, a brief pause in proceedings happened with a clean up operation underway before the race got back in business.

There was a little more drama though. After claiming his first pole since 2012 on Saturday, Simone Corsi (MV Agusta Forward Racing) pulled into pitlane after the Warm Up lap and the experienced Italian was out of the race with a technical issue. Meanwhile on track, Augusto Fernandez led Raul Fernandez into Turn 1, with the latter taking the lead at Turn 6 on Lap 2. Gardner made a steady start and was ninth.

Raul Fernandez wasn’t having it all his own way at the front though. Di Giannantonio came through on the Spaniard to lead on Lap 4, with Gardner slipping backwards. Jorge Navarro (Termozeta Speed Up), Sam Lowes (Elf Marc VDS Racing Team) and Tom Lüthi (Pertamina Mandalika SAG Team) all passed Gardner and suddenly, the Australian was P11 – and had former teammate Tetsuta Nagashima (Italtrans Racing Team) swarming all over the back of him. Still, though, as things stood – Raul Fernandez P2, Gardner P11 – the title was heading to Gardner.

With six laps to go, the Australian found a way past Lüthi at Turn 4 into P10. The top three – Diggia, Raul Fernandez and Augusto Fernandez – were split by nothing, with Celestino Vietti (Sky Racing Team VR46) 1.2s back on the podium scrap in P4. Then, with four to go, Raul Fernandez pounced on Diggia at Turn 2. A classic block pass from the Spaniard saw him take the lead, but with Gardner 10th, it still wasn’t enough. Gardner, in turn, was two seconds behind Marcel Schrötter (Liqui Moly Intact GP) in ninth, although only 0.6s ahead of Nagashima in 11th…

Two laps to go saw Raul Fernandez P1, Gardner P10. Diggia and Augusto Fernandez were still in touch with the race leader too, and Gardner was keeping Nagashima at bay.

By the last lap, a tense 0.3s was the advantage Raul Fernandez held over Diggia and Augusto Fernandez, and Gardner was still 10th – able to just keep his own three-tenth advantage over Nagashima on the chase. Raul Fernandez was holding up his end of the bargain and so was Gardner, but as the rookie sensation crossed the line to take a Marquez-beating, mesmerising eighth victory of the season, taking the chequered flag in P10 made Remy Gardner the the 2021 Moto2™ World Champion.

Diggia and Augusto Fernandez rode superbly to finish just behind Raul Fernandez in P2 and P3, and rookie Vietti ended his campaign with an equal-best result in P4. Aron Canet (Inde Aspar Team) rounded out the top five, with Vierge finishing P6 despite being involved in the red-flagged crash, a great result for the Spaniard who heads off to WorldSBK in 2022.

A simply outstanding title race between Gardner and Raul Fernandez ends with the Australian coming out on top. A staggering season by both, now we get ready to watch them move to MotoGP™ with Tech3 KTM Factory Racing in 2022. Tune in for more next season as they switch orange for… orange!

Raul Fernandez: “It was a fantastic race, I did my job and won. I’m happy with that. We did an incredible season, in the end we didn’t win the Championship but in was the best season of my life, I enjoyed it like a kid and we won eight races. Before we started if anyone told me I’d win two or three I wouldn’t believe it. Now we have eight, it’s incredible.”