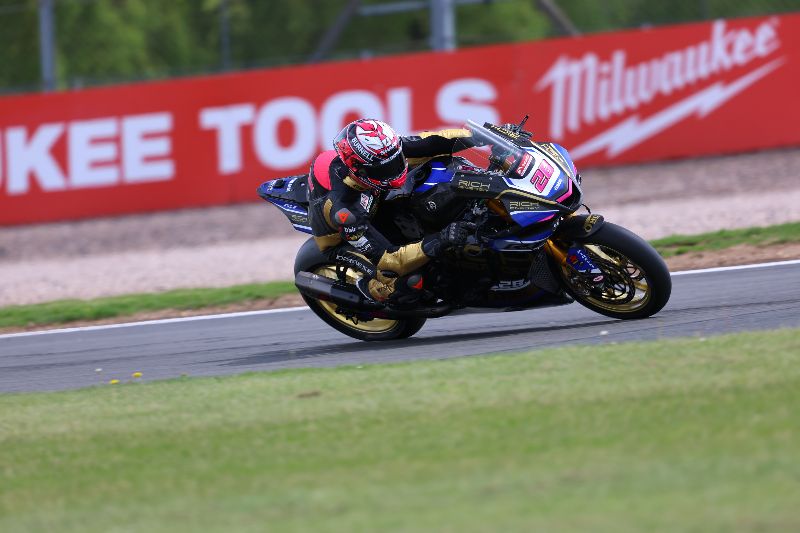 Bradley Ray set the fastest ever Bennetts British Superbike Championship lap on the National circuit this afternoon to top the times in the combined SUPERPICKS Free Practice sessions.

The championship leader held an advantage of 0.323s at the top, as the leading four riders lapped under the existing circuit record.

Ray had taken charge in the afternoon session, posting a rapid lap before a shower briefly interrupted the action. His rivals could not better the time and the Rich Energy OMG Racing Yamaha rider is gunning to fight for victory in the eBay Sprint Race tomorrow.

Ryde made it a Rich Energy OMG Racing Yamaha lockout at the top of the times; after setting the pace in the opening session, the local contender held off Lee Jackson on the Cheshire Mouldings FS-3 Kawasaki at the end of the opening day.

Jason O’Halloran led the McAMS Yamaha charge in fourth place as his teammate Tarran Mackenzie returned to action from injury for the first time since pre-season testing. The reigning champion begins his title defence this weekend, ending today’s sessions in 17th position.

Rory Skinner had another strong session as he held fifth place on the second of the Cheshire Mouldings FS-3 Kawasakis, just ahead of Glenn Irwin as Honda celebrate the 30th anniversary of Fireblade.

Haslam ended his session with a crash at Craner Curves, resulting in a sprained right ankle and he will be reviewed by the BSB Medical Team prior to Free Practice 3.

Bradley Ray
Rich Energy OMG Racing Yamaha
Fastest in SUPERPICKS combined practice
“We made a few changes between the sessions and then in the second session, we put a new tyre in at the start and went out and went as fast as I could!

“I enjoy this track, I’ve always enjoyed it on everything. I had my first Superbike double win here so I always have fond memories coming to this circuit. It’s not going to be as easy as that this weekend, but we’re looking forward to it.

“It’s good having Kyle here keeping me honest; it’s good for both of us as we’ve had a tough couple of years, but is good to be on a competitive bike fighting for wins and podiums.”