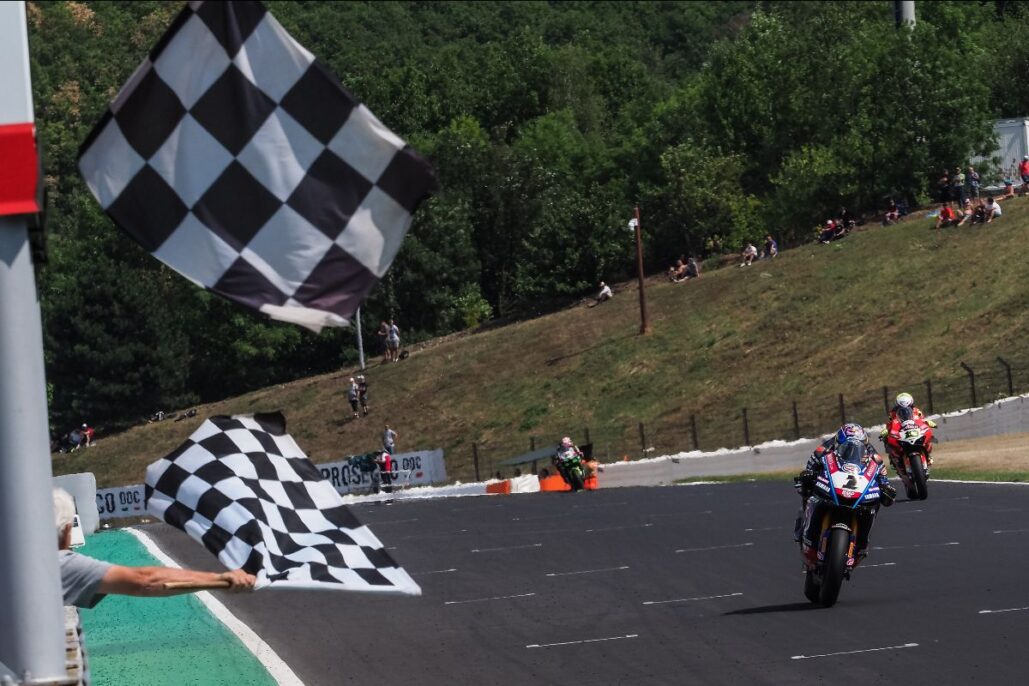 “In Race 2, I had a good pace and I didn’t kill the rear tyre because I need the rear tyre. I followed Jonny and Alvaro, and I started to feel like Alvaro was a little bit fast. I passed Jonny and after I’m fighting with Alvaro because he’s very fast in the straight. Some corners he was very fast, some he was very slow. I passed him and after I ride much better, more relaxed and I did a very good lap time. I am always trying different corners because some sectors, Alvaro is very fast and others he is very slow. I pass him at Turn 20 and after he passed me again in the straight but the straight is important for me because I need the start. If he’s in front of me, he’s faster. If I’m in front of him, and he just passes me, it’s easier to pass him because hard braking is easier for me.”

“It’s easy to see on the straight, it also depends a lot on how you exit from the last corner: I think my exit speed from the last corner was faster than Jonathan and Toprak. I carried more exit speed and it was easier to overtake them. You can’t see on all the changes of direction that I was a bit slower than them because I struggled a bit more. I missed a little bit of traction. I’m happy because we tried to get the maximum out of the positive points of the bike and tried to not lose a lot in the weaker points.”

“In general I felt quite good until maybe six or seven laps from the end. I was getting everything out of the bag and I was having some front slides, some chatter at lean angle, and the bike was moving quite a lot. It was very physical to ride so their pace at the end was just better than mine, I could not do much more. But no regrets because the bike set-up was better than yesterday, we definitely made an improvement – especially compared to last year at Most. I felt much more in control and I enjoyed the bike and circuit this year, just not enough. Congratulations to both Toprak and Alvaro; it was a very solid race.”

“The weekend was really good. It’s good that we carry the progress from Donington. That was a big question mark and we did that here. It was great to get the first podium in a long race. This is important for me and the team. In the Superpole Race, we made a small mistake with the tyre. We went with the zero, but it was on the limit. And the first corner was a disaster. But we did good to come back and for the last race this afternoon I felt good. I had a very good start. There were some connections with riders which made me lose the front group a little. The pace was not bad, but the first three guys had a bit more pace than me. But I’m happy with the progress and this is what I’m looking for the second part of this season.”

“I am really happy about the weekend with three top fives. It’s incredible and it is one of the goals I wanted to achieve. I’m really happy about the job we did; we are very consistent and I hope to continue in this way for the rest of the season. I also hope that sometimes, we can beat the blue, the red and the green bikes ahead of us! We are here to do a good job, and we try and do it!”

“We improved a little bit in respect to the last race, but the expectation was higher for me when we arrived here because I remember last year was better – so I am a bit sad because I want more. It was another difficult weekend in the end because we don’t have the good results for me, just the P6. We need to check the data to understand what we can do and also what I can do. Now we have one month for the break and we have time to understand everything and to restart for Magny-Cours because it’s important for the championship and to try to get good results. Honda and BMW are coming, so we need to improve to stay in front. We are ready for this, we are here for it – it is our job. I want to improve, to close the gap to the top three and have the opportunity to get some podiums.”

To note:
Xavi Vierge (Team HRC) claimed seven place, his best result since he finished fourth in the Tissot Superpole Race at Misano. He was the best placed Honda rider.

The Pirelli French Round will take place from the 9th to 11th of September at Circuit de Nevers Magny-Cours.