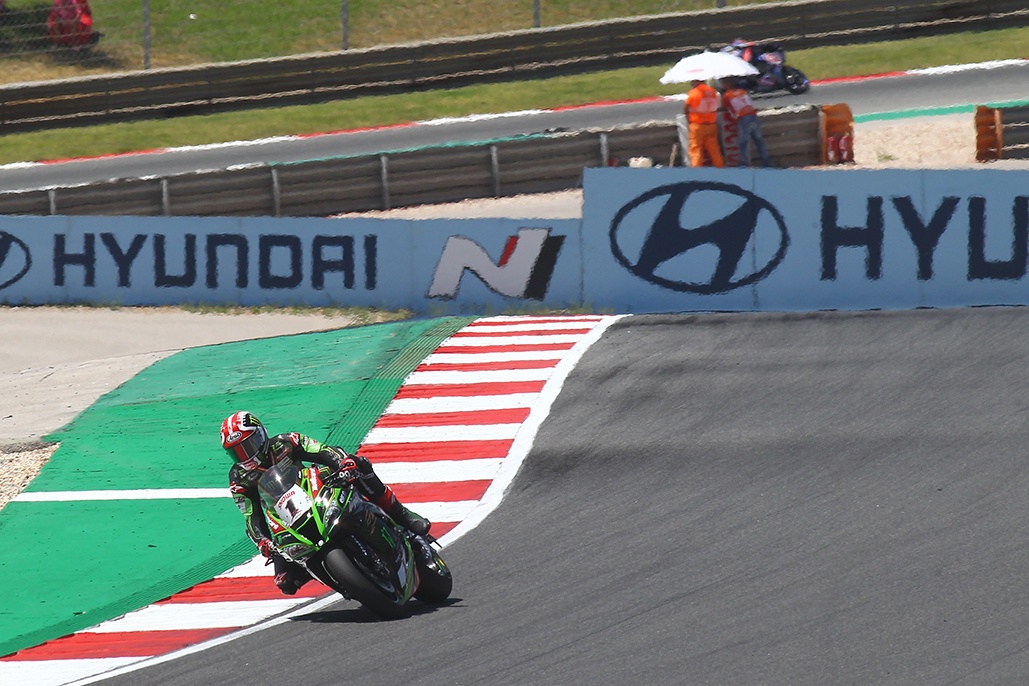 Three out of three for Rea in Portugal as Championship contenders fall in tense Race 2.

The MOTUL FIM Superbike World Championship standings have a new leader in 2020 following Race 2 at the Motul Portuguese Round as Jonathan Rea (Kawasaki Racing Team WorldSBK) moved to the top of the standings following his third race win in 2020 at the Autodromo Internacional do Algarve.

Rea initially faced a challenge from Toprak Razgatlioglu (PATA YAMAHA WorldSBK Official Team) and Loris Baz (Ten Kate Racing Yamaha) with the Turkish sensation on the inside at Turn 1, but Rea swept around the outside of both Razgatlioglu and Baz to keep the lead and pulled out a gap to claim a dominant victory; moving to the top of the Championship by four points.

Scott Redding (ARUBA.IT Racing – Ducati) claimed a stunning second place after making up three places from his starting position, the British rider ensuring Rea could not pull too far away in the Championship standings, having an almost race-long battle with Michael van der Mark (PATA YAMAHA WorldSBK Official Team); the Dutch rider finishing the 20-lap race in third place.

Redding’s Ducati teammate, Chaz Davies claimed a fourth place finish as he fought his way through the field, finishing two seconds clear of Alvaro Bautista (Team HRC) as the Spanish rider secured his best finish of the 2020 season; battling his way through the field to secure a top five finish. Michael Ruben Rinaldi (Team GOELEVEN) claimed a sixth place finish after showing another solid performance as he continued his impressive recent form.

Tom Sykes (BMW Motorrad WorldSBK Team) secured a seventh placed finish for BMW, two seconds back from Rinaldi but almost 12 seconds clear of the recovering Razgatlioglu in eighth; the Turkish sensation battling back from a crash at Turn 5 to claim a points finish. He battled with Federico Caricasulo (GRT Yamaha WorldSBK Junior Team) in the latter stages of the race, taking advantage of the Italian running wide at Turn 5 with just a couple of laps to go.

Leandro “Tati” Mercado (Motocorsa Racing) secured his best result of 2020 with 10th place, holding off a challenge from American star Garrett Gerloff (GRT Yamaha WorldSBK Junior Team) who finished 11th. Gerloff had an incident with five laps to go with Xavi Fores (Kawasaki Puccetti Racing) with the pair coming together at Turn 2; Fores having to retire from the race while Gerloff could continue. Eugene Laverty (BMW Motorrad WorldSBK Team) bounced back from a Turn 5 crash to claim points with 12th place, while Leon Haslam (Team HRC) finished 13th; also after a fall at Turn 5.

Marco Melandri (Barni Racing Team) finished in 14th place with Sylvain Barrier (Brixx Performance) in 15th; Frenchman Barrier securing his best result of 2020 as he picked up the final point available in Race 2.

Baz was forced to retire after a high-speed crash at Turn 15 in the early stages of the race while Maximilian Scheib (ORELAC Kawasaki VerdNatura) retired from the race following an incident on Lap 2. Alex Lowes (Kawasaki Racing Team WorldSBK) joined the list of fallers at the Turn 5 hairpin as he came off his bike on Lap 7, remounting the bike but bringing it back to the pitlane to end his race early.

P1 Jonathan Rea (Kawasaki Racing Team WorldSBK)
“I can’t believe that I came in here 24 points back and go out leading the Championship, it’s incredible. We had some worries; we didn’t come here in winter testing when all the other teams did, and I rode terribly in Free Practice 1; I was starting to panic a little bit. I could see my pace in the races was very good, especially at the end I could do exactly as I wanted. This race, I just knew to keep the pace strong at the beginning with Scott. I knew, sooner or later, that the cord would break, and I could just ride with my pit board. My team gave me a great bike. The wind picked up a lot today and I had a few sketchy moments over the hill where the front was rolling so that was enough to tap me on the shoulder to look at the 25 points, and move on to Aragon in a couple of weeks.”

P2 Scott Redding (ARUBA.IT Racing – Ducati)
“It was a really hard weekend for us. We were kind of in damage limitation mode, I knew I could ride for the podium, but the bike wasn’t really working that well for us. I really wanted to get a podium here because I knew Jonny was going to win all three races after I saw his pace. It’s okay as you have tracks like that that suit bikes better, but it isn’t acceptable to finish fifth and then seventh is not ideal. We changed a lot of the bike and in the warm-up lap and told the team that I didn’t feel good. I felt good and could run with Jonny for quite a few laps. My target was to get a gap and then to manage because I knew I was going to suffer at the end. We managed to pull out second and I think that’s the best job we could’ve done here today.”

P3 Michael van der Mark (PATA YAMAHA WorldSBK Official Team)
“I’m really happy with this race. From the start, I stayed on a consistent pace and people were making mistakes. I kept in my rhythm, I felt quite good and I struggled a little bit with the front tyre. In the end, I was with Scott. I was fast but I wasn’t stronger, so I had to wait until he made a mistake. I went in front but again hit neutral and lost that gap, and then couldn’t pass him. We had a similar level; he was stronger in some points than I was. I’m really happy with this podium, the temperatures went up again and the bike felt good again. Massive thanks to the team because this morning I was very disappointed.”