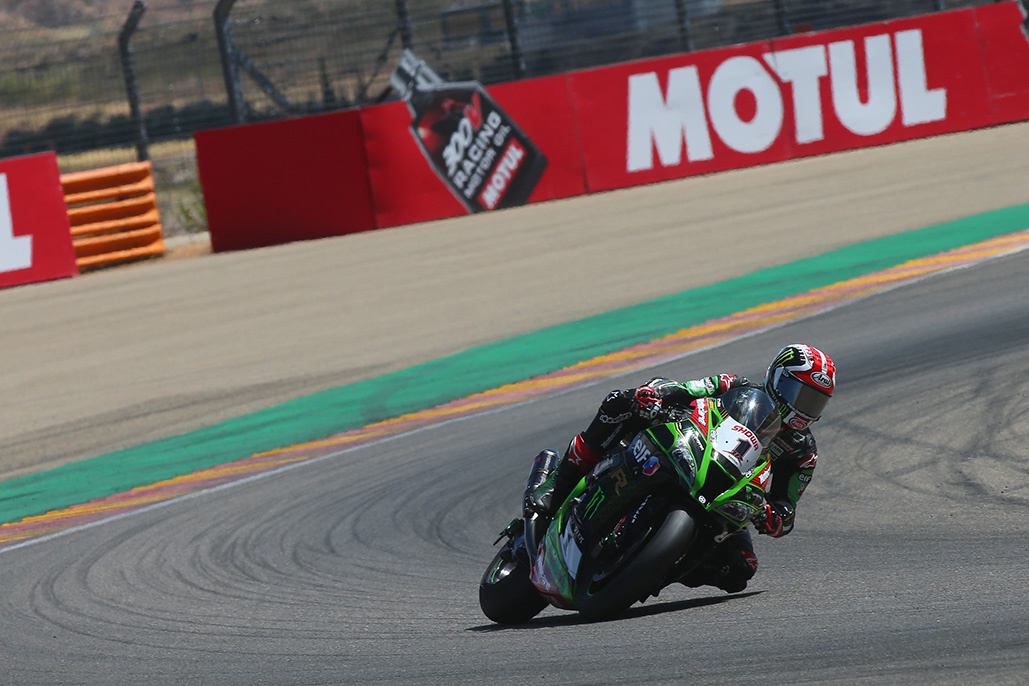 Jonathan Rea takes his second win of the Aragon Round as Alvaro Bautista claims his first podium for Team HRC.

It was a thrilling battle for MOTUL FIM Superbike World Championship as Jonathan Rea (Kawasaki Racing Team WorldSBK) reclaimed his Championship lead with a 10 point gap after Race 2 victory at MotorLand Aragon for the Prosecco DOC Aragon Round, despite a late-race mistake allowing his rivals to close in on the reigning Champion.

Rea had started the race from pole position and, despite pressure from Scott Redding (ARUBA.IT Racing – Ducati) in the early corners, was able to pull away from the chasing group. Rea led every lap throughout the race despite a mistake on Lap 14 which allowed Chaz Davies (ARUBA.IT Racing – Ducati) to close the gap from around two seconds to just two tenths. Despite Davies attempting a move into Turn 1 on Lap 15, Rea held on to take victory by over one second ahead of Davies. Alvaro Bautista (Team HRC), who started the race from fourth, got ahead of Redding in the early stages, claimed his first podium for Honda and Honda’s first podium since Magny-Cours in 2016; Bautista and Honda showing good pace throughout the weekend.

Redding would finish the race in fourth place after being passed by Bautista and Davies, but the British rider also had to make a move on Michael van der Mark (PATA YAMAHA WorldSBK Official Team) on Lap 4 to help secure fourth place. Michael Ruben Rinaldi (Team GOELEVEN) made it three Ducati machines in the top five with fifth place as he also got by van der Mark, with the Dutchman finishing in sixth place.

Sylvain Barrier (Brixx Performance), Christophe Ponsson (Nuova M2 Racing), Takumi Takahashi (MIE Racing Althea Honda Team) and teammate Lorenzo Gabellini all finished the race while Loris Baz (Ten Kate Racing Yamaha) retired from the race following a crash on Lap 4 of 18 at Turn 15; the French rider unable to re-join the race following the incident where he came off on his bike on his own. He was not the only non-finisher as Marco Melandri (Barni Racing) who retired with a technical issue and Roman Ramos (OUTDO Kawasaki TPR) retired from the race on the penultimate lap.


P1 Jonathan Rea (Kawasaki Racing Team WorldSBK)
“I can’t believe the pace; I didn’t expect that. We kept the bike the same as yesterday, just changed the front tyre. We went for the SC1 front compound instead of the harder one and in this hotter temperature it seemed to work a little bit better. At the end, Chaz was coming, and I made a massive mistake in the last corner. I went in fourth gear and had no engine braking to stop me. I thought I was going to go down, but I just couldn’t get that last shift. I lost the position as Chaz came through, but I knew I needed to go straight back past and put my head down because I had a little bit extra.”

P2 Chaz Davies (ARUBA.IT Racing – Ducati)
“I got a poor start and left myself with work to do. I was able to pull Jonny in and it was kind of similar to yesterday in that we didn’t have much tyre left at the end, front and rear. It seemed like Jonny was able to dig in during those last couple of laps. Full credit to him because he did a good job. I was on my limit; I couldn’t do anything more. I think I cooked everything coming through the pack and that’s all the bike had. I’m really happy with that, it was a solid weekend. The bike, in many ways, is feeling pretty solid and it’s a good base to start from for next weekend.”

P3 Alvaro Bautista (Team HRC)
“The test helped us to make a step forward, but everybody tested here so we’re all in the same condition. I’m so happy with this podium as this is the result of the hard work we are doing. We are on the way to our target, which is to win. We are still a bit far away, but I am so happy. I want to thank HRC, Honda and my team. My mechanics worked hard during the weekend because we had a lot of problems and they spent a lot of time working on my bike, so they deserve this podium.”