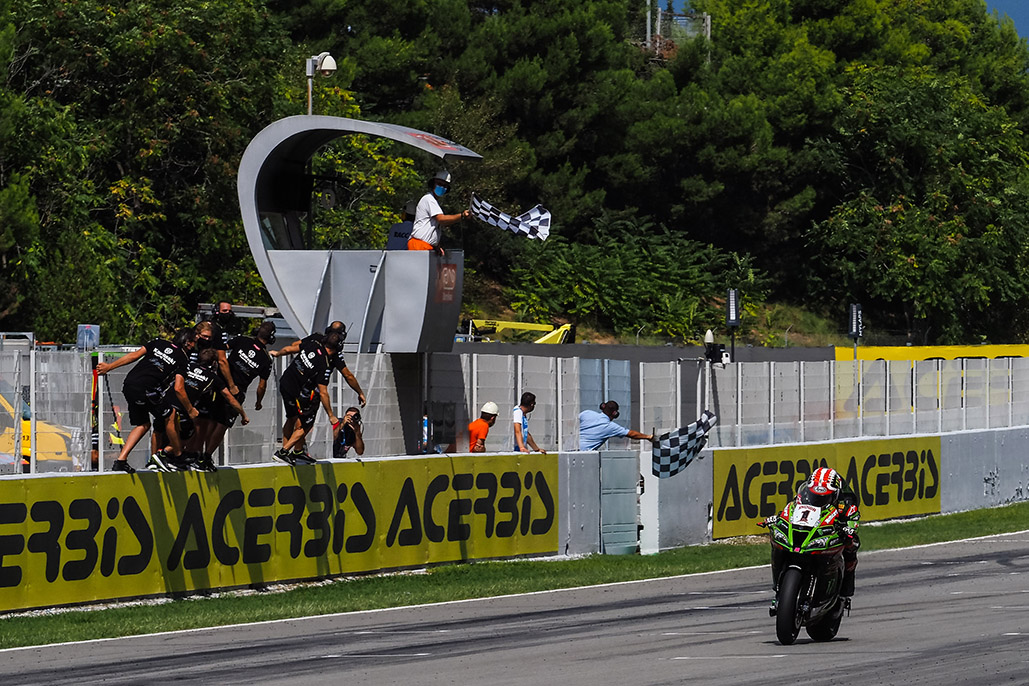 The first ever MOTUL FIM Superbike World Championship race at the Circuit de Barcelona-Catalunya was won by Jonathan Rea (Kawasaki Racing Team WorldSBK) as the reigning Champion claimed victory in Race 1 for the inaugural Acerbis Catalunya Round; extending his Championship lead to 41 points.

Rea started from pole position after going quickest in this morning’s Tissot Superpole session and held position off the line as the lights went out, maintaining and increasing a gap to his nearest rivals on track. Scott Redding (ARUBA.IT Racing – Ducati) finished in second place after getting a superb launch off the grid after starting from seventh place; the British rider taking advantage of a close call between Toprak Razgatlioglu (PATA YAMAHA WorldSBK Official Team) and teammate and Michael van der Mark at Turn 1 with both able to stay on their bike.

Michael Ruben Rinaldi (Team GOELEVEN) and Redding battled in the early stages of the race before trying to work together to close the gap to Rea but they were unable to do so with Rea extending his lead to eventually win by 2.6s. Redding came home to finish in second place while Rinaldi fell down the order in the latter stages, eventually finishing in seventh.

Chaz Davies (ARUBA.IT Racing – Ducati) battled his way through the field to finish in third place meaning British riders have now locked out the podium on 54 occasions in WorldSBK, with Davies finishing ahead of van der Mark in fourth. Alvaro Bautista (Team HRC) lost ground compared to his starting position, finishing in fifth place with Razgatlioglu in sixth after the incident with his teammate at Turn 1. Bautista lost a position to Davies on Lap 15 of 20 when he went wide into Turn 1, allowing Davies to sweep around the outside of Bautista.

Rinaldi finished in seventh place after losing lots of time in the final few laps, being passed by Davies, van der Mark and Bautista in three successive laps. He finished ahead of Garrett Gerloff (GRT Yamaha WorldSBK Junior Team) as the American continued his strong performances in dry conditions in Barcelona.

Alex Lowes (Kawasaki Racing Team WorldSBK) was in ninth place with Leon Haslam (Team HRC) completing the top ten. Eugene Laverty picked up points for his efforts with 11th place, just one tenth away from a top ten finish. Wildcard Jonas Folger (Bonovo Action by MGM Racing) battled his way through the field after not setting a time in qualifying, moving up from 21st to finish 12th.

Sylvain Barrier (Brixx Performance), Takumi Takahashi (MIE Racing HONDA Team) and Valentin Debise (OUTDO Kawasaki TPR) were the rest of the finishers in the race with Tom Sykes (BMW Motorrad WorldSBK Team) retiring from the race in the early stages.

P1 Jonathan Rea (Kawasaki Racing Team WorldSBK)
“I had a lot of motivation in this race. It’s my team home race. Obviously, Ana Carrasco can’t be here with us in the team, so this race win is for her and also for my grandfather. It is his anniversary today, 27 years ago he died so I was using that as a lot of power in the race to just never give up. I am super happy for me, my team. I wish the fans could be here, and their families to celebrate with us but lot of info for tomorrow. I am looking forward to that one because in the last laps, the front was moving quiet a lot. In this temperature with this grip level, we just need a bit more for tomorrow. So, looking forward to sleeping on that and coming back stronger tomorrow.”

P2 Scott Redding (ARUBA.IT Racing – Ducati)
“In qualifying I struggled a bit, I think the qualifying tyre was not so good so I started seventh on the grid which is not ideal but I got off to a mega start, then van der Mark came through and made some space for me so it made it a little bit easier. I was behind Rinaldi and I felt good. I needed to get passed him and I got by him, and I lost the rear in Turn 3. This is a corner where we suffer a lot and I tried to push and that’s what happened. He came back, passed me again. He tapped the seat so I thought he was a bit faster than me in some sectors, I tried to see something. I saw the tyre drop and I thought he needed to go and close the gap and had a good run to close the gap a little bit to Jonny, but it was just give and take all the time. So, from seventh to finish second, I am happy with that I must say. It’s a shame we couldn’t fight for the win but in this point of the Championship, we have to get the best results we can, when we can.”

P3 Chaz Davies (ARUBA.IT Racing – Ducati)
“Yes, a bit steady the first ten laps, I think. I was giving it everything, but I just didn’t seem to have the ability to get it hooked up in some of the longer corners in the early parts. And then it seems that everybody dropped, well the people I was riding with dropped to my sort of grip and then I was able to move forward, and I stayed maybe a bit more consistent than those who were around me. It is the first 10 laps where we are missing out. Start was good, I was in a good position, I was well placed to go forward but had a lack of traction.”