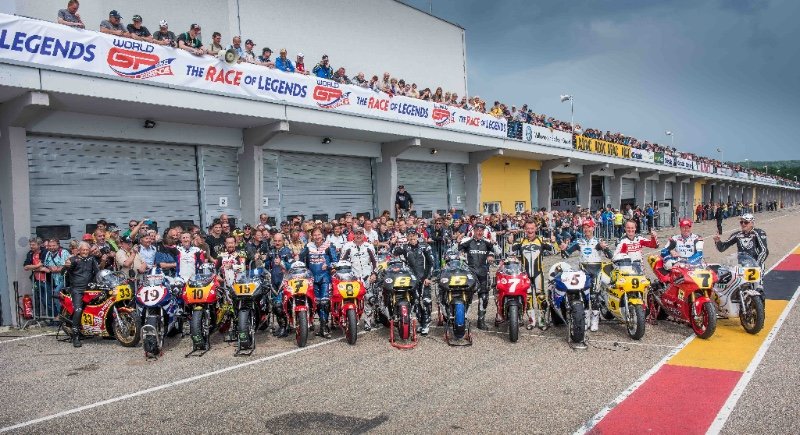 After last year’s opening success at Jerez in sunny Spain, more than 30,000 fans flocked to the German circuit to see icons such as past champions Wayne Gardner and Freddie Spencer back in action, all once again riding the remarkable 2-Stroke 500cc machines that made their epoch so special. Large numbers of enthusiasts also bolstered the traditional celebrations in the nearby Hohenstein-Ernstthal market square where the riders were honoured, mingled with fans and gave interviews.

As always, the Sachsenring fans were knowledgeable and enthusiastic, with many bringing along photos and memorabilia for signing, and enjoyed the opportunities to meet and be photographed with their heroes.

Following Saturday morning’s practice session, the starting grid for both the weekend’s two races was confirmed, with Spencer, Garry McCoy and Gardner making up the front row for both eagerly-anticipated encounters.

It was local hero Ralf Waldmann who made a good start but had to fight hard with Spencer to maintain his lead to the finish. A 20-time Grand Prix winner and twice a GP podium finisher at the circuit, after the race Waldmann jokingly commented: “Finally I have won at the Sachsenring! My Suzuki went so well, especially out of the corners.”

Although originally due to ride a 2002 Proton KRv3, McWilliams switched to one of the two 500cc V4 2-stroke machines fielded by Ronax and, after giving feedback and advice on suspension set-up, the fast Ulsterman was able to secure victory in the second race. Despite the confidence shown in his Suzuki RGV, this time Spencer had to settle for third behind a hard-charging Yamaha-mounted McCoy.

Adding to the sense of occasion, six-time World Champion and Sachsenring legend Jim Redman thoroughly enjoyed what will be his final race and reiterated how much he loves the circuit. “This is a very special place for me,” he said. “I had thought that maybe I could span 60 years in motorcycle racing, but I’ll be 85 in November so now is probably a good time to stop!”

Sadly, former World Champion and World GP Bike Legends ambassador Wayne Gardner (AUS) experienced technical problems with his 1991 Cagiva V591 and so the expected front-runner was unable to score a podium placing in either showdown.

Many of the World GP Legends riders including Gardner, Spencer, Read and de Radiguès are now very much looking forward to making their UK debut as part of the festivities at next month’s Silverstone Classic (29-31 July). A full list of those riders and their very special bikes will be released soon.