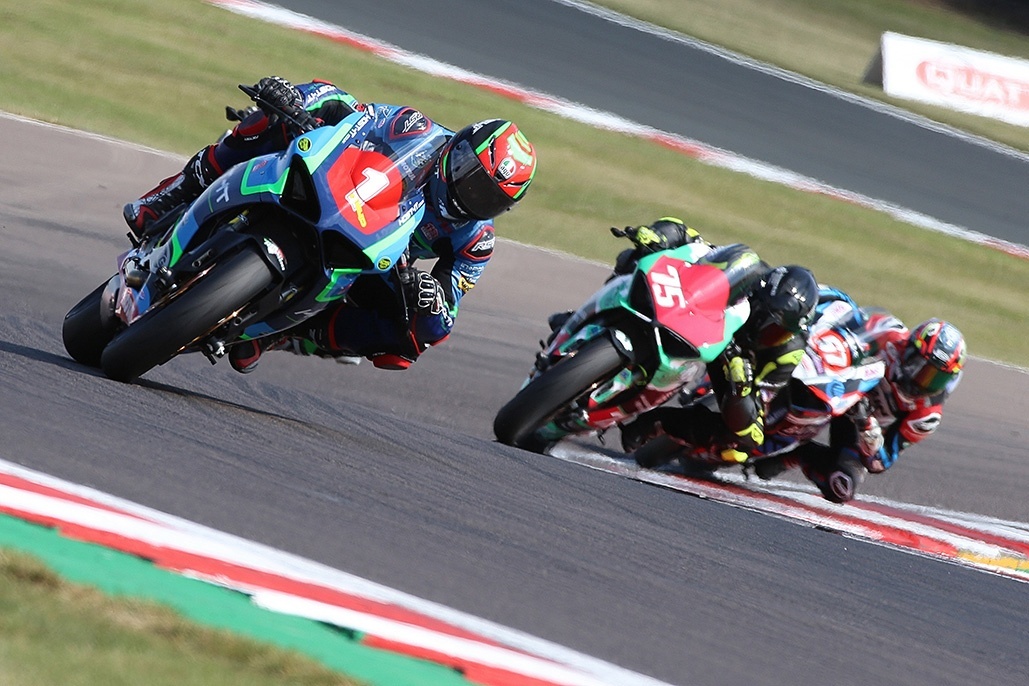 Josh Day got his title defence off to the best possible start with 2 poles and 2 wins on board the Host-it.co.uk Racing Team Panigale V2 at the opening Ducati Performance TriOptions Cup round held at Donington Park this weekend.

Race 1
Ed Best (Massingberd Mundy by Symcirrus) took the holeshot, but reigning champion Day had soon moved through, pulling out over half a second lead by the half-way stage. Best held 2nd for much of the race, 0.3s ahead of his teammate Elliot Pinson, who in turn was having a battle with Levi Day (BPS Plumbing).

Josh Day continued to extend his lead at the front, setting fastest lap after fastest lap. Disaster struck Best on lap 10 however when he tumbled out of the race, promoting reigning Junior Supersport Champion Pinson up to second, with Levi Day still in close contention.

With Josh Day cruising away to the opening Ducati Performance TriOptions Cup victory of the year, Levi was ultimately able to get the better of Pinson for second place.

Day led the pack into Redgate before pulling a gap and clearing off at the front, winning the race with a comfortable 2 second margin.

Pinson held 2nd for the race duration, going on to claim an impressive double podium finish on his debut Ducati Cup race weekend.

Despite a couple of big moments, Craig Neve (CN Racing) was able to put the disappointment of a DNF yesterday behind him to take the final podium position.

Best had been running in 3rd in the opening laps, eventually finished 4th ahead of Shoubridge, Cox, McGuinness and Tustin. Stevens bettered his Race 1 result finishing 9th, with Dijon Compton locking out the Top 10.

Levi Day was unlucky to end up off the circuit in the early stage of the race after looking to make a move on Pinson at the front. But the BPS Racing rider was able to keep his bike upright in the gravel trap and fought from the back of the pack to finish 12th behind Highsparks Motorsport’s Mark Cheetham to score valuable points.

Josh Day (Host-it.co.uk Racing Team #1) – 1st
“To be fair, the bike we’ve got is pretty mint. Moto Rapido are prepping it. I knew the pace was going to be a lot better. I did a 10.1, so not far off the 9s we did last year. I had to get away because the young guns are hot on your heels the first few laps. I know I’ve got pace at the end but it’s another thing overtaking so I thought if I’m in front then hopefully I can control it. Tried to pull away and not show what I had left in the bag. Pulled a gap and then dropped some low 10s, and managed to pull a bigger gap. I can’t thank Andrew and Julie and the Host.it guys enough, all my personal sponsors. We’ve never done the double before. Lat year we played it a bit tactical so this year we’re trying to take a different approach. We’re here to win races and have fun. And that’s what we’ve done this weekend. Hopefully it’ll continue but I’m sure the other boys will have something to say about that. It’s brilliant. Thanks to all the BSB crew for getting us back on track.”