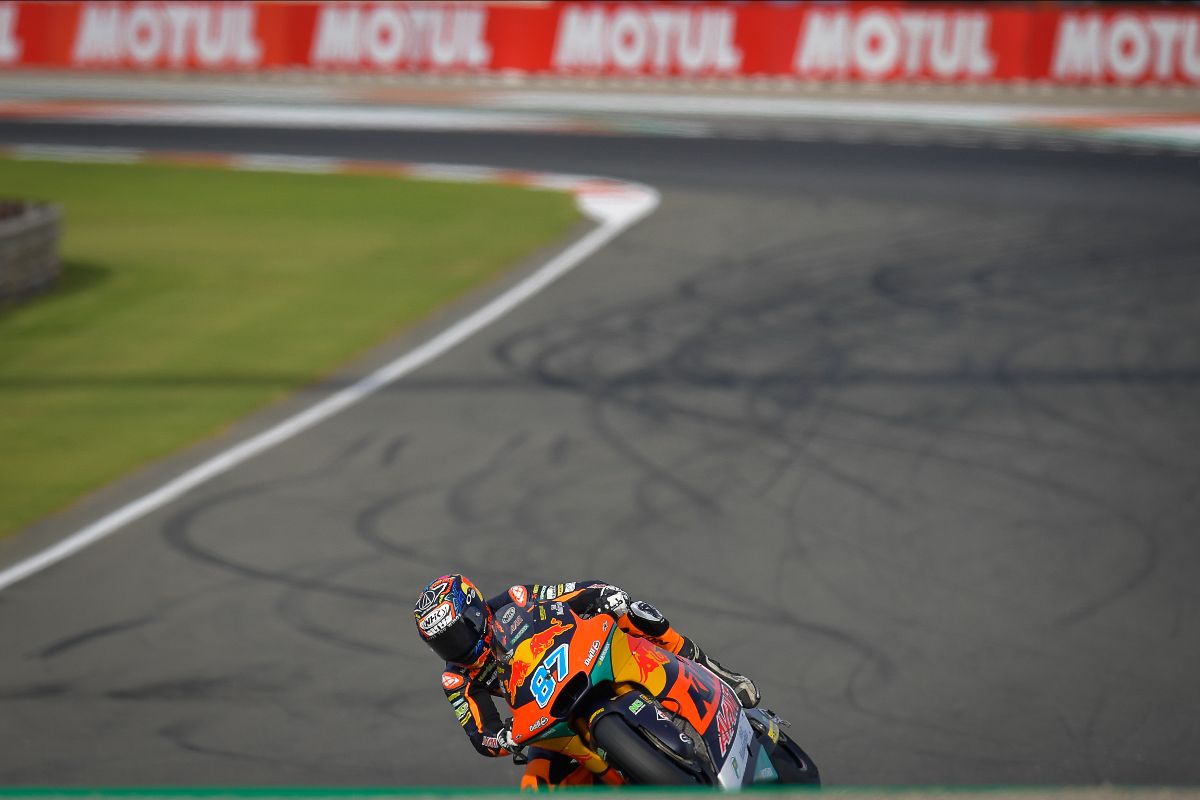 Day 1 of the Moto2™ title-deciding weekend is done and dusted, and it’s just 0.008s between World Championship leader Remy Gardner and Red Bull KTM Ajo teammate Raul Fernandez, his sole remaining challenger for the crown. In a dry afternoon at the Gran Premio Motul de la Comunitat Valenciana, the Australian’s best was a 1:35.857, with his teammate that close second and Augusto Fernandez (Elf Marc VDS Racing Team) keeping the top three tight as the number 37 ended Friday just 0.041s off the top too.

FP1
Augusto Fernandez pipped Joe Roberts (Italtrans Racing Team) to top spot in FP1, with just 0.020s splitting the duo. Fernandez’ 1:45.968 in the damp conditions saw the Spaniard beat third place Hector Garzo (Flexbox HP40), who had one crash and also pulled off a stunning save, by two tenths.

Sam Lowes (Elf Marc VDS Racing Team) headed to the medical centre after an early crash, the British rider later declared fit, while Tom Lüthi (Pertamina Mandalika SAG Team) also crashed early in the session – not the way the Swiss rider would have been looking for at his final Grand Prix but rider ok.

FP2
Raul Fernandez was the pacesetter for most of the session as the riders were continually finding time on an ever-improving Circuit Ricardo Tormo. With just under four minutes to go though, Gardner took over at the summit by that 0.008s margin as we enjoyed a familiar sight at the top – a Red Bull KTM Ajo 1-2.

On his final lap, Raul Fernandez returned the favour on Gardner to go back to P1, but the Spaniard’s quickest time was then chalked off due to him having exceeded track limits at Turn 12, leaving Gardner on top. Augusto Fernandez and rookie Celestino Vietti (SKY Racing Team VR46) got to within a tenth of the top time as 0.087s covered the top four. Xavi Vierge (Petronas Sprinta Racing) was fifth, and still only just over a tenth off the top.

There were no fallers in FP2.

Combined Timesheets
With the sun coming out in the afternoon, it’s FP2 that sets the pace. Gardner leads the way ahead of Fernandez R, with Fernandez A third. Vietti and Vierge complete that top five.