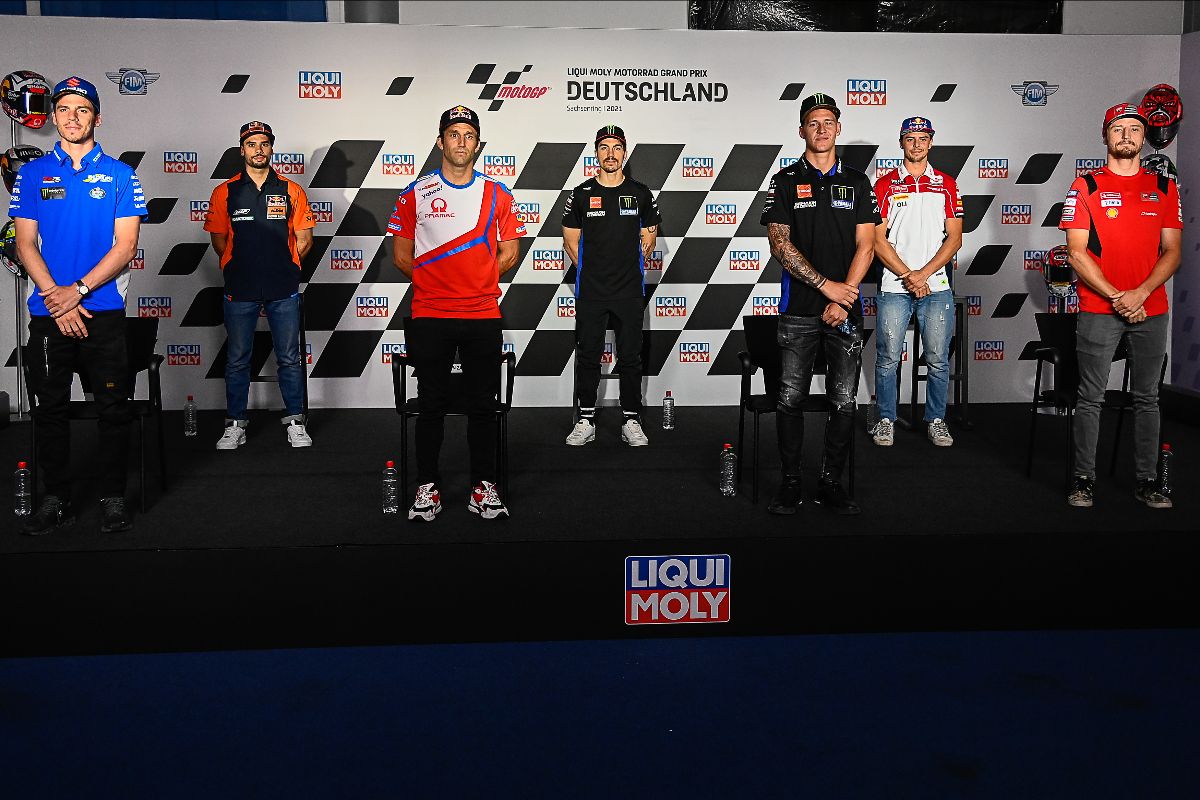 Fabio Quartararo: “Catalunya was a strange race. At Turn 1 my leathers were completely open, I tried to put it back but then my chest protector went flying so yeah, I did the last laps with the leather open. Then I got the penalty three hours later, I prefer to take it in the funny way than to be upset, it makes no sense. Now we arrive at a new track and try to work on a new system and yeah that’s what happened in Barcelona.

“I think that all the circuits the bike is working well. This is a track I’m not a big fan of but two years ago we had great pace but then I crashed on the first or second lap, but I think the bike is suited to all the circuits. I’m looking forward to this as when something not good happens in the previous race it makes you eager to start the next one, so looking forward to tomorrow.”

On Fabio Di Giannantonio moving to MotoGP™:
“I think, in the past, I didn’t make many races with Fabio, but looking at his style, he is really smooth and precise. This is important for MotoGP™. He will do well, but it is important he does his best for this year. I was in the same situation a couple years ago, where I had my contract for the Sachsenring and I was so excited, but the important thing is to stay focused until the end of the season. He will enjoy the first test, and I wish him luck with the first straight on the MotoGP™ bike!”

Johann Zarco: “As usual I try to be neutral and positive. We know… or we hear from all the media that this is not the best track for the Ducati, but I don’t fully agree with it because we can have some good surprise and really with the experience and getting on now with the time and on this bike, I’m curious to see which feeling I will have on this track that it’s a real particular one compared to all the others. But, pretty happy to be back in Germany just to drive to Germany, go again to north of Europe to with the car and be there. It’s quite warm, but the paddock is so like tricky… special on one side, the hospitality and some other trucks on the other side of the paddock. I like all of this and just hope to enjoy this weekend and do great things to keep pushing in this Championship, that everything is going well at the moment.

“As Jack said now, the bike is much more easier than what he rode before, even when he got the fourth position, so this means we will have a step forward that can give a good feeling on this track and for me it’s really something you have to understand on this track because we can think maybe we need to turn a lot, we cannot use the power, but in the end it’s always Marc that was winning here and it was not always a Yamaha rider. Maybe the Yamaha is the best for the turning but always Marc was show that the V engine was winning here. So, I try to take it in that way, and we have to start the weekend to really know what the potential is, but always with this positive mind that it’s possible to do well.”

Jack Miller: “It’s a special track for me Germany. It’s fantastic in Moto3™, but on a GP bike it is tight, but no, it is fun, it has its own unique character which is nice to have because many of the tracks are quite similar to each other, so it is nice to have something a bit left-field, literally left! Like you say, I’m excited for the weekend, last time we were here I think it was Dovi, myself and Danilo had a nice little fight for 4, 5, 6 so it wasn’t too bad. I’m definitely excited to take the GP21 around here, it is definitely a better package and I think we can be quite surprised with how well it works here. The weather looks fantastic for the weekend and yeah, 10 years! (since his Grand Prix debut).

“There are always tracks that suit your bike more than others but it is about how you adapt your bike to the track. Here it isn’t too bad, the corners aren’t like other tracks where you rely on turning to a massive degree, you’re not changing directions too much, it’s all one way. Whereas Assen is another kettle of fish with a lot of change directions at high speed, so we have two very different elements these next two weekends for our bike, as I said, I’m super excited to see how the GP21 works in those conditions because, it’s definitely been an improvement from what we rode here in 2019, and yeah, we need to keep working on that and hopefully we can turn some of the non-Ducati tracks, like we’ve done to a few so far, into ones that aren’t too bad for a Ducati.”

Joan Mir: “This is a track is that I always enjoy! A lot of left corners then yeah, it’s quite special the ups and downs and I think that the Suzuki can fit quite well here. In 2019 my feelings were quite good even though I was not really strong. But, yeah, I remembered I fought with the Ducatis during all the race so I enjoyed that. I expect to be competitive, to be strong, to be able to try to fight for the podium and who knows, let’s try for the victory.”

On Fabio Di Giannantonio moving to MotoGP™:
“I had a couple of fights with Fabio (Di Giannantonio) in the past in Moto3 and he’s always in a really good position on the bike, he’s quite smooth and yeah, like Fabio (Quartararo) said, I think he will fit well on a MotoGP bike. You have to be really precise, and I think that he’s also precise. I wish him luck because now the most important thing for him is to finish that the season in a best way and then and then for sure he will be really excited the first time to try the MotoGP bike that always is amazing.”

Maverick Viñales: “Actually, I think we worked quite well in Catalunya, we were trying to build a good weekend and in the middle of the race we closed the gaps but I ran out the tyres and I couldn’t overtake Joan and I could not go forwards, so basically we are trying to build up the confidence. Here in the Sachsenring, it is a track I like a lot, I enjoy it a lot here and it is a track we can be strong so I have really high confidence on it and we can do a good job.

“I needed a lot of laps (in the test), because after three bad races you need laps to understand and get back the confidence. It went really well, we tried many different things on the bike, which normally is difficult to understand but the Montmelo test was very positive. Everything we learned there we will try to put into use at the Sachsenring, for sure, it is one of the tracks where the riding style will do a lot so we will try to be fast from FP1.”

Miguel Oliveira: “I’m confident, but as always with the feet on the ground. I think we need still to start the weekend and see the level here. I believe our bike is now much more suitable to many racetracks and we are not so worried when we come to race that we haven’t tried this bike before, and yeah. I’m motivated, of course, back-to-back podiums and looking forward to starting the weekend and see what we can do.”

Fabio Di Giannantonio: “First of all, I’m excited to be here for the first time, so it’s quite unusual to me. So, honestly, I’m super happy, so excited to start already but we still have to be super focused on this year. For sure, next year will be something amazing for me because I will ride in MotoGP with the best riders in the world and also with the bike of my dreams, you know, the Ducati is for an Italian guy is something amazing, so yeah really excited honestly. But, as I said, I have to be really focused on this season. I want to do more podiums and more victories and arrive in MotoGP as ready as possible and then trying to achieve the best for this year; that’s the main goal at the moment!”

That’s it from Thursday! Free Practice begins on Friday morning, before MotoGP™ gears up in Germany at 14:00 (GMT +2) on Sunday.