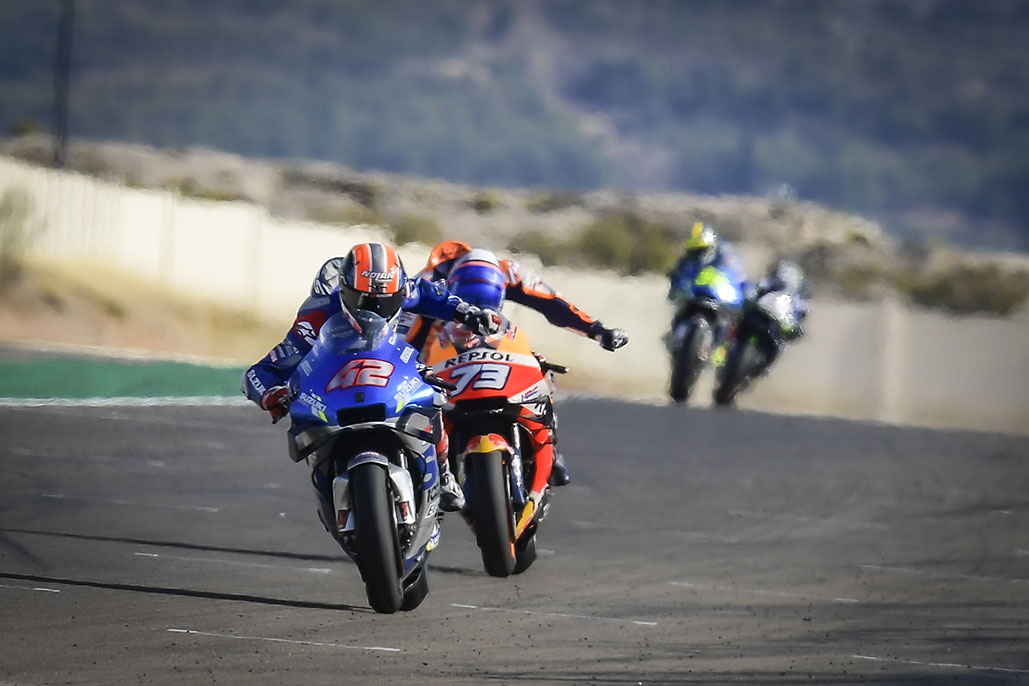 Suzuki make it a day to remember with their best MotoGP™ results in first and third, with Alex Marquez taking another stunning podium in second

2020 continues to serve up a stunner of a MotoGP™ season, and there have now been eight different premier class winners. In the Gran Premio Michelin® de Aragon, it was Alex Rins (Team Suzuki Ecstar) on the top step as the Suzuki rider took his first victory since Silverstone 2019, slicing up from tenth on the grid to fend off another late charge from rookie superstar Alex Marquez (Repsol Honda Team), who took second and the 850th premier class podium for Honda. Third place went to Joan Mir (Team Suzuki Ecstar), the number 36 back on the rostrum and the new Championship leader after a tough day at the office for Fabio Quartararo (Petronas Yamaha SRT).

As the lights went out, it was Maverick Viñales (Monster Energy Yamaha MotoGP) who was off like a shot from second on the grid, the number 12 carving his way to the front immediately round the outside of Turn 2 as the Petronas Yamahas duelled behind, and Franco Morbidelli (Petronas Yamaha SRT) headed a bit wide. Soon enough though, Viñales’ closest company came from Rins as the Suzuki rider sliced through from tenth to get past Morbidelli and Quartararo, homing in on the number 12 in the lead.

Stalking the Monster Energy Yamaha for a couple of laps, Rins chose his moment at the final corner and took a tight, tight line to sweep up the inside for the lead, neatly done to take over at the front. Just behind, things were getting spicy as Mir had managed a two-for-one past the Petronas Yamahas with a similar move up into third, and Alex Marquez was on a charge.

Rins, Viñales, Mir… the trio at the front remained pretty close together as the cat and mouse began, with Marquez the man making serious gains. As the number 73 arrived on the scene, Mir seemingly decided enough was enough, slicing through on Viñales at the final corner. To compound Viñales’ chagrin, Marquez then made a stunner of a late dive past the Yamaha into Turn 1 too…

Up ahead, Rins remained ahead but it was far from becoming a runaway win. As the laps ticked down, the number 42 retained the close company from teammate Mir and Alex Marquez, but the next move wouldn’t threaten for the lead. With six to go, and again at the final corner, the number 73 Repsol Honda swooped past Mir to take over in second, Alex Marquez on for his second second place in a row. Or was he?

Once past, the Honda was closing. And not in thousandths or hundredths, but really reeling Rins in. Alex Marquez was over three tenths faster with four laps remaining, and looked seriously primed for a shot at the win. But Rins was holding station, and then a major warning came Marquez’ way at the final corner with two laps and a corner to go. The number 73 was out the seat as he squeezed on the gas and lot some ground, but he gathered it back up and set his sights back on the Suzuki.

Rins had a three tenth lead with two to go, and coming onto the last lap, it remained at 0.3 seconds. Marquez had to try and get close enough to get into the slipstream down the back straight, but Rins got his GSX-RR hooked up nicely and the Honda man wasn’t close enough to try his inside sweeping move. Despite the pressure, Rins made no mistakes. rising over the brow of the hill and making it to the line with two tenths in hand. The eighth winner in eight races and eighth of the season, back on the top step for the first time in over a year – and Marquez, despite losing out on the win, back on the podium for the second time in a week.

Mir had to keep an eye out for Viñales on the final couple of laps, and Morbidelli had Nakagami for company in the battle for the top five. In the end, Mir came out on top in the fight for third but again, by only a couple of tenths, but it’s enough to see him take the title lead as Quartararo plummeted through the field. Viñales also made a big gain in points given that, coming home off the podium but the second Championship challenger over the line.

Nakagami kept up his 100% top 10 finish record in 2020 with a superb P5, the Honda rider managing to beat Morbidelli on the last lap for the honour of top Independent Team rider too. That’s the number 30’s second top five of the season.. and he’s only 29 points off Mir!

After a difficult weekend, Andrea Dovizioso (Ducati Team) salvaged P7 on race day to sit closer to the top of the Championship than he did before the lights went out, top Borgo Panigale machine on Sunday and still in the hunt. Cal Crutchlow (LCR Honda Castrol), after a tough start, was able to climb back up to P8. The two Ducatis of Jack Miller (Pramac Racing) and Johann Zarco (Esponsorama Racing) completed the top 10, not what either would have been expecting heading into the weekend.

So where was Quartararo? The former points leader, after struggling with front tyre pressure, went from off the podium to fringes of the top ten to end up outside the points in P18. After a heroic pole position taken despite his big FP3 crash, the Frenchman had one of his toughest Sundays yet in the premier class… but he’ll be fired up to try and hit back next week. Mir now leads on 121 as Quartararo remains on 115, with Viñales third with 109. Dovizioso has 106, still very much in touch…

That’s all Bibendum wrote at the Gran Premio Michelin® de Aragon, with another huge swing in momentum in the title fight. Whose way will it go next week? Find out in less than seven days as MotoGP™ get back on track for the Gran Premio Liqui Moly de Teruel on Friday.

Alex Rins: “Incredible! Unbelievable! Sincerely, at the start I was so calm, and I was thinking ‘hmm maybe that’s a bad thing!’ I made a really good start, the first laps were really good, then when I was behind Maverick I was thinking, ‘Alex, you have a bit more so try to go, but slowly because otherwise you’ll ruin the rear tyre!’ I tried to manage the distance to the guys behind and it’s amazing. This is for all the fans that normally come here from the towns around here, and for all this amazing team, and my family, friends, girlfriend. Everybody! This is for you guys!”