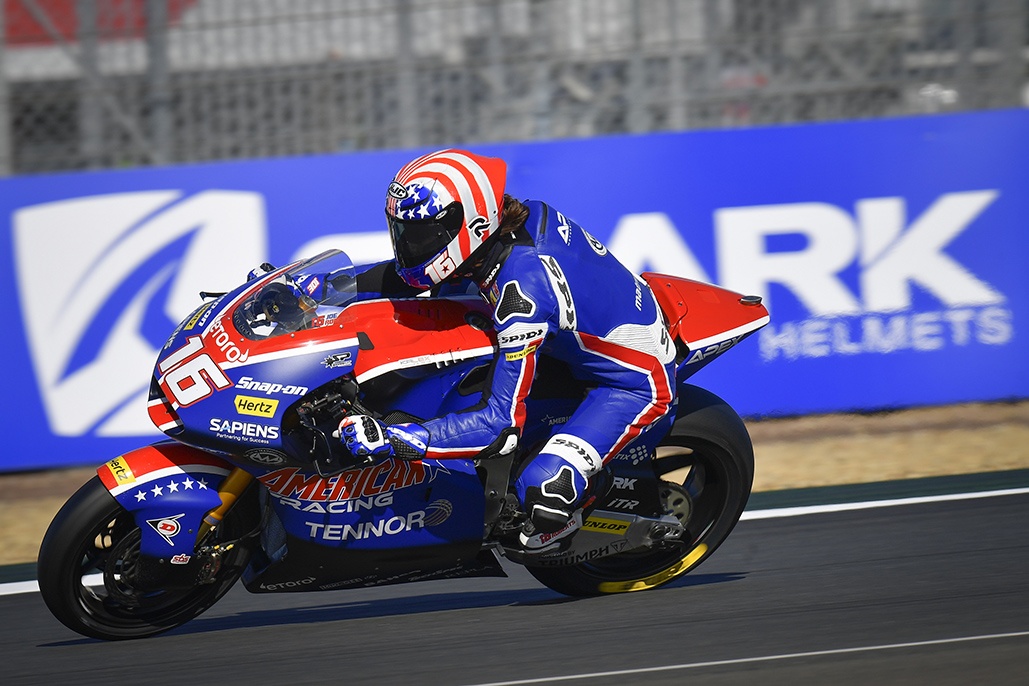 The number 16 hits a milestone, with Lowes second and Gardner third on the grid in France.

Not since 2005 has an American taken three poles in a single Grand Prix season, and back then it was the late, great Nicky Hayden doing the business in MotoGP™. Now it’s Joe Roberts in Moto2™, with the Tennor American Racing rider putting in a stunner at the Shark Helmets Grand Prix de France to take his third pole of the year, ahead of Sam Lowes (EG 0,0 Marc VDS) and Remy Gardner (ONEXOX TKKR SAG Team).

In Q1 there was plenty at stake with some big names looking to move through, and the man second in the Championship, Enea Bastianini (Italtrans Racing Team), got the job done to top the session ahead of Tom Lüthi (Liqui Moly Intact GP) – despite a crash for the Swiss veteran – Aron Canet (Inde Aspar Team) and Fabio Di Giannantonio (Termozeta Speed Up). Then it was time to decide the sharp end…

Jorge Martin (Red Bull KTM Ajo) was the early pacesetter and went P1, but disaster struck for the Spaniard at Turn 3 as he crashed out, rider ok but then left to watch from the sidelines. Would anyone overhaul his lap? There was still half the session left and more drama came swiftly as Jorge Navarro (Termozeta Speed Up) followed his compatriot into the gravel at the same corner, out of contention.

Back at the top, Martin’s lap was a solid one and it took a few minutes for anyone to depose him. When they did, it was Sam Lowes. The Brit shaved a tenth and a half off it and it was all going down to the final push – but Roberts was lighting up the timing screens on his final lap…

Over the line it was less than a tenth but the number 16 did it by 0.087, making a little history and setting himself up well for a crack at the win on Sunday. If Roberts does take victory, he’ll be the first American winner in the intermediate class since 1990! Lowes is forced to settle for second but was consistently quick once again, with Gardner putting in a late lunge to complete the front row – the Australian delighted with that as he continues to recover from injury and had a more turbulent weekend at Barcelona.

Martin was shuffled down to fourth, with Marco Bezzecchi (Sky Racing Team VR46) in fifth and only half a tenth off his old Moto3™ sparring partner. Incredibly, despite his monster highside on Friday, Championship leader Luca Marini (Sky Racing Team VR46) starts sixth as he races on, looking at least to not lose too much ground at Le Mans.

Xavi Vierge (Petronas Sprinta Racing) just got the better of teammate Jake Dixon as they launch from seventh and eighth respectively, with Bastianini’s tougher weekend so far seeing him ultimately line up ninth. With Marini not so far ahead on the grid, however, we can guess the ‘Beast”s Sunday target…

Joe Roberts: “We had a plan, because of the new rule with the yellow flag, let’s just go right away but I thought we jumped the gun, but then everyone was there, it was a little bit messy and there was a change I didn’t like, so… I do better alone, so I just came in and changed the tyre and went back out. Honestly I didn’t know if I could do that. That session I was struggling a lot with the bike and that last lap I just, put it down, I did the best I could, something feels different this weekend, something could change tomorrow, and we could go for the win.”