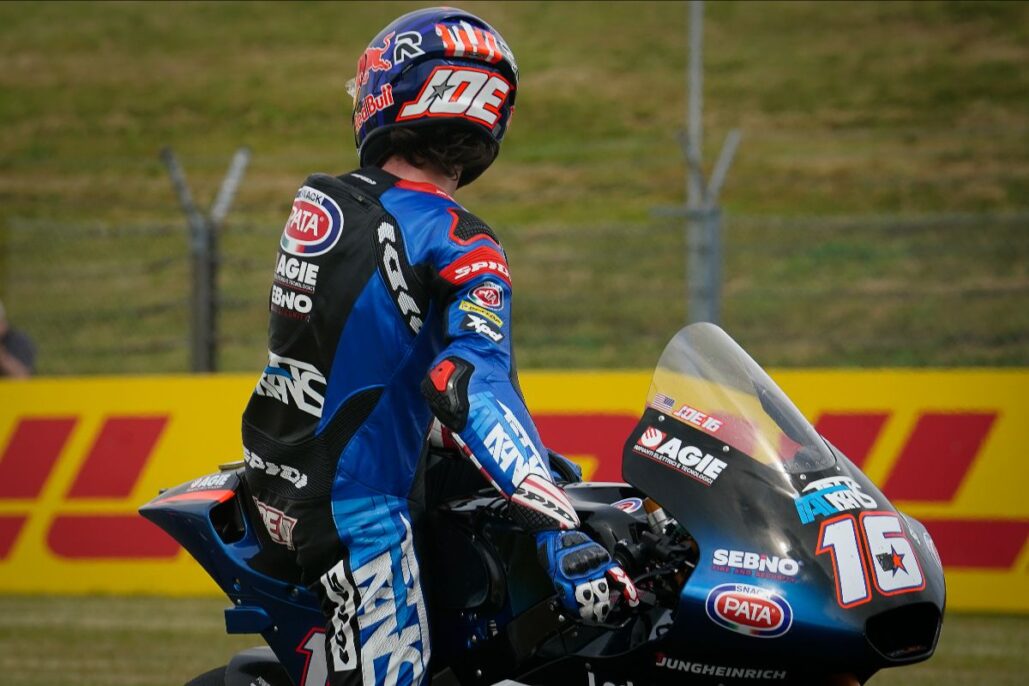 The American heads Fernandez and Arenas after a Friday of two halves at Assen.

Joe Roberts (Italtrans Racing Team) set the pace on Friday at the Motul TT Assen. In an impressive display by the American, he put one over last weekend’s dominant race winner, Augusto Fernandez (Red Bull KTM Ajo), by setting a 1:37.393 in a dry afternoon session for the intermediate class. Still, Fernandez is not far away from the top despite a mid-session crash, while Albert Arenas (Inde GASGAS Aspar Team) was third on Friday.

FP1
Aron Canet (Flexbox HP 40) was king of the wet in the morning, heading the timesheets ahead of Fermin Aldeguer (MB Conveyors Speed Up). Canet set a fastest lap of 1:46.877 with the chequered flag out at the TT Circuit Assen and, despite the rainy weather, it proved to be a hotly contested 40 minutes of action. Aldeguer finished only 0.085 seconds slower on a 1:46.962 and Fernandez made it an all-Spanish top three in FP1 after a 1:47.052.

FP2/provisional Q2 places
The rain had stopped for FP2 and riders were instantly slashing seconds off the fastest lap times. The opening runs turned into a duel between the two aforementioned Spaniards, with Fernandez getting down to a 1:37.840 but Arenas usurped him by almost three tenths of a second just before the halfway mark. Around the same time, Fernandez crashed at De Strubben (Turn 5), but it would prove to be a minor mishap.

It took until the final two minutes for the fastest lap to be reset again, and it was Fernandez snatching back top spot when he clocked a 1:37.534. However, Roberts had already threatened to take over the ascendancy by then, and he would do just that when he punched out a 1:37.393 just prior to the chequered flag. Fernandez then made more speed, but remained second-quickest as he completed his session with a 1:37.529. Arenas found no improvement during his second run, but his earlier 1:37.569 was good enough for third.

Ai Ogura (Idemitsu Honda Team Asia), as he seeks to overhaul Celestino Vietti (Mooney VR46 Racing Team) in the Moto2™ title race, took fourth in with a 1:37.710. Fifth and sixth went to MB Conveyors Speed Up team-mates Fermin Aldeguer and Alonso Lopez on a 1:37.840 and 1:37.942, respectively.

Canet, who was quickest in FP1, claimed seventh in FP2 before then heading to hospital briefly. Suffering with nosebleeds recently, the Pons rider went to have his nose cauterised. A minor, non-surgical procedure, he remains fit to ride and will be hoping it’s done the trick for Saturday.

With dry conditions forecast for FP3, there is still plenty left to play for before qualifying! Tune in for the final Free Practice session on Saturday, before qualifying from 15:10 (GMT +2).