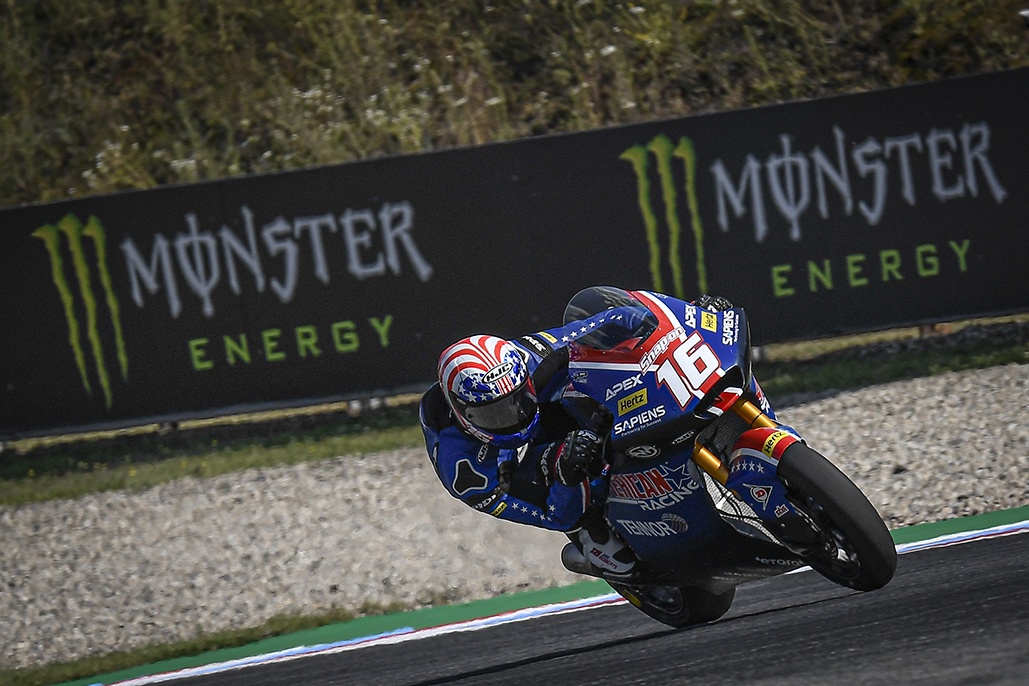 The American edges out Lowes to take his second pole of the season, with Bastianini completing the front row.

Roberts set his 2:01.692 and fastest effort on his third flying lap in Q2 to displace Bastianini from provisional pole, with almost the entirety of Q2 setting their best times on their first two laps as they scrambled for position. Lowes and teammate Augusto Fernandez took their time to get their first laps of qualifying in, but when they did, Lowes went straight to P2 behind Roberts, Fernandez into P8.

The gap between the top two sat at just over a tenth but with track conditions not getting any better, the riders – including Lowes – were struggling to find any personal best times. And sure enough, no one was able to trouble the pole time as Roberts’ stunning return to form secures him a second pole of the season. Lowes’ incredible pace all weekend rewards him with a second place start and a third consecutive front row, with Bastianini continuing the form that ultimately propelled him to victory in the Andalucia GP.

Fourth place went the way of Hafizh Syahrin (Openbank Aspar Team) and the Malaysian will launch his best grid slot of 2020, aiming to hold off Andalucia GP podium finisher Marco Bezzecchi (Sky Racing Team VR46) in P5. Jorge Martin was the sole Red Bull KTM Ajo rider in Q2 after Championship leader Tetsuta Nagashima failed to make it through Q1, and the Spaniard will be starting P6 as he aims to close the gap to his teammate in the title scrap.

Marcel Schrötter (Liqui Moly Intact GP) equals his best Saturday afternoon result of the season with a P7 finish, the German ending the session just 0.020 ahead of Fernandez. Q1’s fastest man Fabio Di Giannantonio (MB Conveyors Speed Up), who took his first intermediate class podium at Brno last year, completes Row 9 – his best qualifying of the year so far. Rounding out the top 10 is the man lying second in the Championship, Luca Marini (Sky Racing Team VR46). Eight-tenths off Roberts’ time isn’t where the Italian would have wanted to be, and he’s got work on his hands with Bastianini starting on the front row if the two are to duel it out for the win.

What will Sunday bring? Championship leader Nagashima had a tough day at the office and the Japanese rider will be launching from P21, so there’s an open door for many – but an incredibly competitive field to fight it out with. Tune in for the Moto2™ race at 12:20 local time (GMT+2) at the Czech GP.

Joe Roberts: “To know the speed is still there is amazing. It was quite difficult for me in Jerez to understand, we had four months off and then with these conditions no one has been in before.. it as difficult for the team to find the feeling I wanted, I felt like I hit a wall each session. But coming here I’ve always had something special happen here, on my debut in Moto2 I got tenth… it’s been a track I’ve been looking forward to. We put the bike back to Qatar, exactly the same, we even have hashhtag – #JustLikeQatar! I’m surprised about pole position, I felt strong all weekend but I hadn’t led a session and my one lap pace with the new tyre wasn’t amazing or exactly how I wanted it, but the guys made a new setting for qualifying anticipating different conditions and the laptime came easy to be honest, I felt really confident and really comfortable!”