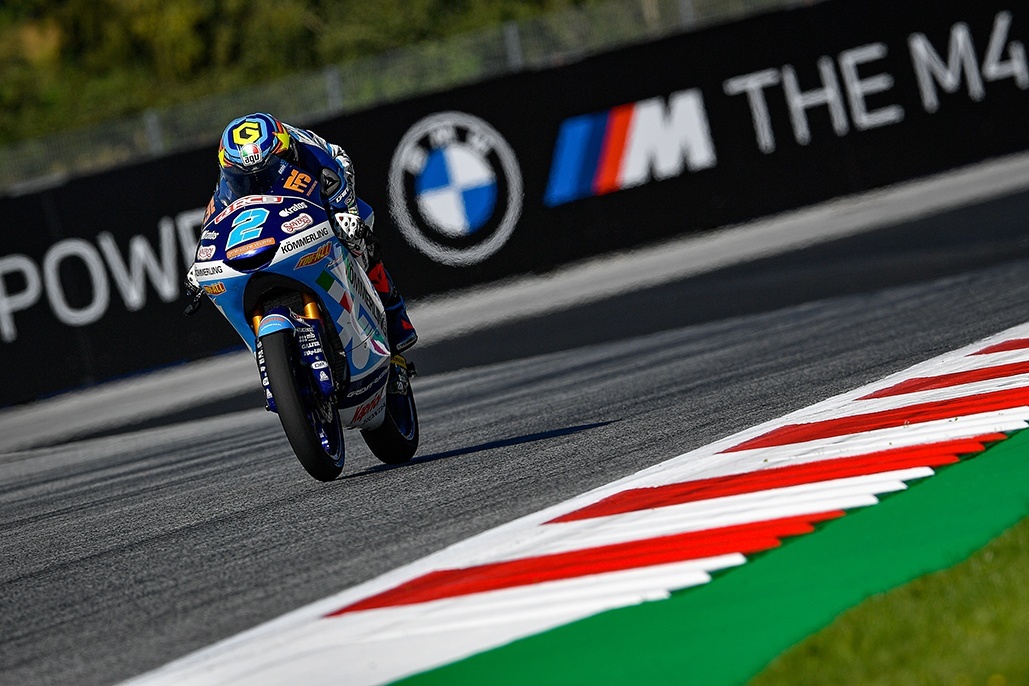 The front row in Styria are split by 0.064, with Rodrigo leading Fernandez and Suzuki.

Under sunny Styrian skies, it was Jaume Masia (Leopard Racing) who headed the timesheets in Q1, securing his place in Q2… or not. Drama hit for the Spaniard in the session as he crashed and damaged his machine, then remounting and heading back to the pits. Except the bike was leaking, leaving two more riders behind to crash and a long clean up operation and delay to the next session. For the lapse of judgement, Masia was suspended from Q2, meaning it was only Niccolo Antonelli (SIC58 Squadra Corse), Deniz Öncü (Red Bull KTM Tech 3) and Darryn Binder (CIP – Green Power) who would move through and take part.

Once Q2 was underway, we were treated to some late drama as Rodrigo stole pole position away with his final flying lap of the session, chequered flag waving. Before that final attack it was Tony Arbolino (Rivacold Snipers Team) who held provisional pole, but 2020’s qualifying sensations Tatsuki Suzuki and Raul Fernandez jumped ahead of him, demoting the Italian to third… and Rodrigo making sure it became fourth.

Behind that top three split by just 0.064, Arbolino will therefore front the second row of the grid, joined there by Celestino Vietti (Sky Racing Team VR46), who will start from fifth at the Red Bull Ring for the second time in a week, and John McPhee (Petronas Sprinta Racing) in sixth as the Scot proved the fastest of the top three in the Championship.

Half a second behind Rodrigo’s 1:36.470 and seventh on the grid will be Leopard Racing’s Dennis Foggia, the Italian a fraction clear of Ai Ogura (Honda Team Asia), who is the man third overall and the second quickest of the top three in the title battle at the moment. it’s not by much though, as World Championship leader Albert Arenas (Valresa Aspar Team) did suffer his worst qualifying of 2020, but only to the extent of starting alongside Ogura in ninth as he defends his 28 point lead.

Darryn Binder will no doubt be a strong challenger on Sunday from 10th on the grid, not needing to make up his often customary and impressive 15 or 20 places on race day, and he will line-up on row four alongside another man likely to have his elbows out: Deniz Öncü. Filip Salač (Rivacold Snipers Team), Sergio Garcia (Estrella Galicia 0,0), Jeremy Alcoba (Kömmerling Gresini Moto3) and Antonelli complete the top 15.

That’s the grid set for Sunday, although especially in the lightweight class, everything will already be a shuffle by Turn 1. Tune in for another miraculous melee on Sunday as Moto3™ take on the Red Bull Ring again from 11:00 (GMT +2).

Gabriel Rodrigo: “It was a bit difficult because the second to last corner was very slippy, I had a plan to use two tyres, but as the conditions were a bit strange I decided to stay on track and go faster lap by lap. At the end it worked because I already put a nice lap in at the start but on the last lap I improved even more. I’m very happy, after the last two Sundays we needed a bit of energy for the race! We’re focused for tomorrow, I think the pace is good so I’m really looking forward to the race.”