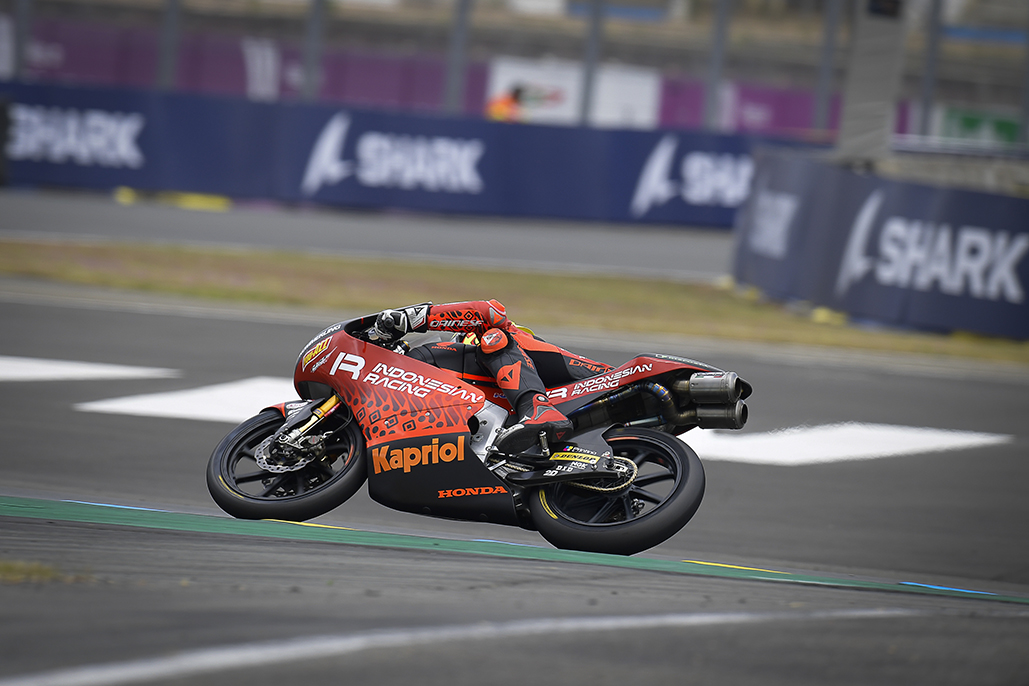 Gabriel Rodrigo (Indonesian Racing Gresini Moto3) leads the way after Day 1 of the SHARK Grand Prix de France, with the Argentinean once again pulling it out of the bag on Friday. This time around it’s Darryn Binder (Petronas Sprinta Racing) closest on the chase, ahead of key rival Jaume Masia (Red Bull KTM Ajo) as the Spaniard completes the top three. Masia’s teammate, Championship leader and rookie Pedro Acosta, finds himself outside of the provisional Q2 graduation zone after a day of mixed conditions in France, and Saturday morning looks like it could well be wet…

That’s how Friday began and a damp but drying FP1 saw John McPhee (Petronas Sprinta Racing) take to the top late on, with Acosta in second but half a second back. Nevertheless, that was an impressive feat in his first ever session at Le Mans as he suffered two small crashes in the wetter conditions before recovering to take second. Third went to Gaviota Aspar GAS GAS rider Sergio Garcia.

Crashes were undoubtedly the headline-stealers in the morning. 18 incidents – only one of which was a technical issue, that for Niccolo Antonelli (Avintia Esponsorama Moto3) – saw the French GP off to a tougher start for many as Friday dawned wet. And it remained wet for the lightweight class, although conditions were drying and markedly improved by the end of FP1.

With no more real rain coming, FP2 stayed fully dry and could end up even more vital than normal as the forecast says they’ll be more rain on Saturday morning. That means Q2 could already be decided, and Acosta is one who doesn’t currently stand to go through. Rodrigo, Binder and Masia let their experience shine to end the day as the fastest trio overall, ahead of Antonelli bouncing back from his technical trouble to take fourth. Deniz Öncü (Red Bull KTM Tech3) moved showed more good speed in fifth, just ahead of veteran Italians Andrea Migno (Rivacold Snipers Team) and Romano Fenati (Sterilgarda Max Racing Team).

Ryusei Yamanaka (CarXpert PrüstelGP), Stefano Nepa (BOE Owlride) and Ayumu Sasaki (Red Bull KTM Tech3) completed the top ten on Friday, of which half crashed: Binder, Öncü, Migno, Fenati and the aforementioned number 6 of Yamanaka. The final four heading through as it stands are Jason Dupasquier (CarXpert PrüstelGP), McPhee, Riccardo Rossi (BOE Owlride) and Garcia, with Acosta left down in P18 on Friday. But then, he has already won from pitlane… so can much be read into that? And in the eventuality, could the extra wet track time of Q1 actually help the likes of Acosta and his fellow rookies?

Find out how the pack shuffles in FP3 from 9:00 (GMT +2), with rain expected to spice things up even more at Le Mans. Qualifying then starts from 12:35 to decide the grid, so make sure to tune in!