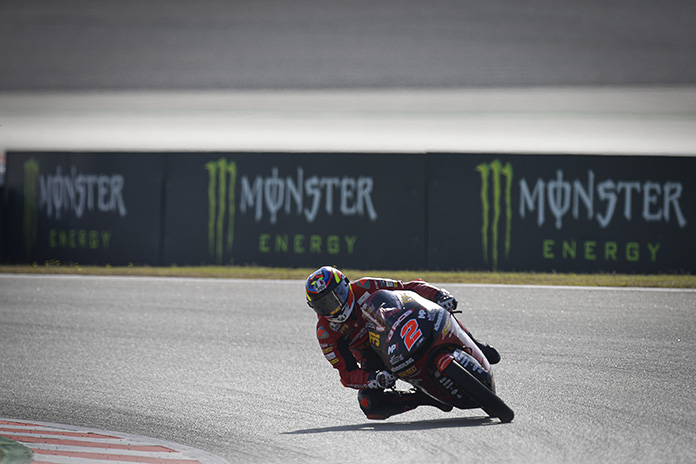 The Argentinean keeps his roll going, with teammate Alcoba in second and points leader Acosta down in P25

Gabriel Rodrigo (Indonesian Racing Gresini Moto3) will start the Gran Premi Monster Energy de Catalunya from pole, the Argentinean staying on his impressive roll of form to head the grid for the second time in Barcelona – the venue where he took his first Grand Prix podium in 2018. Team work made the dream work as teammate Jeremy Alcoba took second, tucking in and pulling just hundredths clear of Niccolo Antonelli (Avintia Esponsorama Moto3) in third. Championship leader Pedro Acosta (Red Bull KTM Ajo) had a tougher Saturday at the office, with the rookie sensation back in P25 on the grid.

Q1
A host of unexpected names found themselves in Q1, and one certainly sailed safely through: John McPhee (Petronas Sprinta Racing). The Brit was 0.373 ahead of nearest challenger Xavier Artigas (Leopard Racing), with second in the standings Jaume Masia (Red Bull KTM Ajo) and French GP podium finisher Riccardo Rossi (BOE Owlride) joining the Brit and the rookie in moving through.

Q2
Rodrigo came out the blocks flying in Q2 and managed to fend off a bunch of riders all eager to tag onto the back of his Honda, the Argentine shooting to P1 with a 1:48.257. McPhee, after coming through Q1, was in the groove too; the Scotsman setting two personal best laps in a row to sit just under a tenth from Rodrigo. Masia, meanwhile, was third heading into the final minute but every rider squeezed over the line for a final flying lap, setting up a showdown.

Rodrigo couldn’t be stopped, however, and pulled clear of the rest to set a new lap record and remain the fastest man in Barcelona by the end of play on Day 2, too. Tucked in behind his teammate, Alcoba managed to make it a Gresini 1-2. Antonelli set his best time on the final flying lap too, as did Free Practice pacesetter Stefano Nepa (BOE Owlride) in fourth and rookie Izan Guevara (Solunion GASGAS Aspar Team) in P5. One man who didn’t was McPhee as he slipped to P6, but it remains a second row start for the Scotsman.

Behind them sit the likes of Acosta, Garcia and Migno looking to charge forward…

The slipstream on the main straight will surely play into their hands, and Moto3™ are ready for another battle in Barcelona. So tune in for the lightweight class race at the slightly later time of 11:20 (GMT +2) on Sunday!

Gabriel Rodrigo: “It’s a really nice day, we’re in good form so just trying to take advantage of that. In FP3 i felt really good and on my first run alone in qualifying was nice, that’s why I spoke with Jeremy to do some teamwork and it worked really nice, 1-2 for the team is fantastic. Super happy because it’s like another home Grand Prix and to get pole here is very special. We’ll try and fight for the victory tomorrow.”