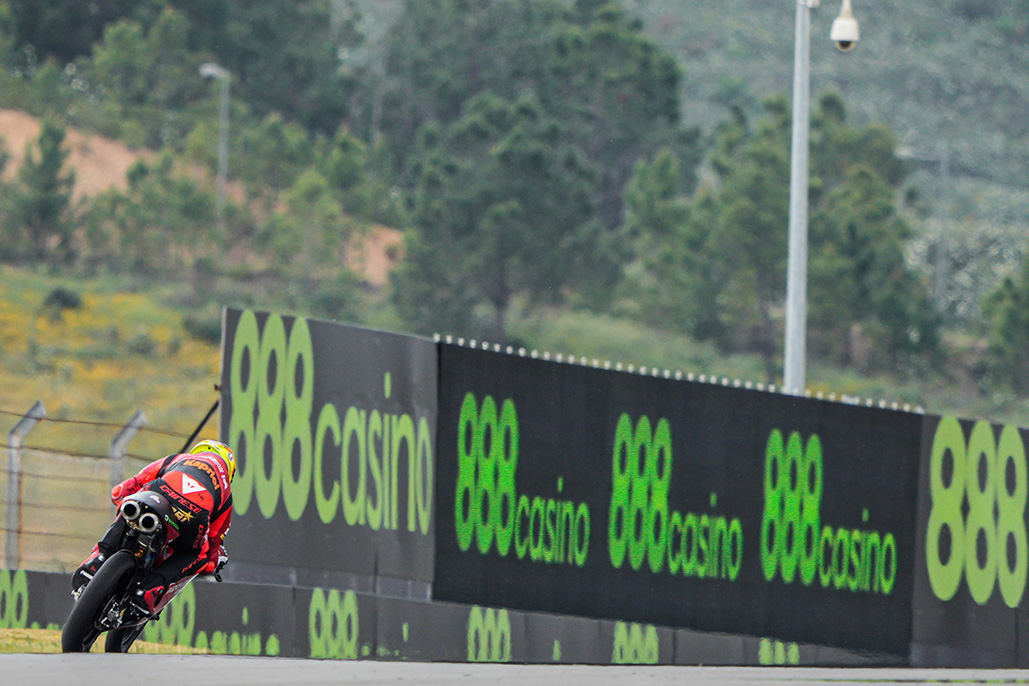 The Argentinean pulls out nearly half a second on the field as mixed conditions give way to dry… for the most part.

Gabriel Rodrigo (Indonesian Racing Gresini Moto3) laid down a marker on Day 1 of the Grande Premio 888 de Portugal, pulling out 0.476 on closest rival Andrea Migno (Rivacold Snipers Team) to go fastest on Friday by some margin. Jaume Masia (Red Bull KTM Ajo), the all-time lap record holder in Moto3™ at the Autodromo Internacional do Algarve, completes the top three nearly exactly half a second off the top.

The morning saw the grid greeted with a good few damp patches, with action therefore understandably a little slow to start. It did gradually dry out but not wholly, so all riders improved in a fully dry FP2. Fully dry for the most part at least, with rain starting to spit in the final ten minutes or so – and no one after that able to depose Rodrigo as the Argentinean remained top, although his best was around two seconds or so off Masia’s all-time lap record set in 2020.

Migno had more of his solid 2021 speed to just pip the aforementioned Red Bull KTM Ajo of Masia, with only 0.028 between the two to compare to Rodrigo’s 0.476 advantage in P1. Sergio Garcia (GASGAS Valresa Aspar Team) slots into fourth another tenth back, with Romano Fenati (Sterilgarda Max Racing Team) in fifth as the veteran’s speed remains despite him having the same experience of the track as most, rather than a chunk more.

Championship leader, rookie and man of the moment Pedro Acosta (Red Bull KTM Ajo) is sixth after Day 1 as he tastes the Autodromo Internacional do Algarve for the first time in the Grand Prix paddock, but he has already won here in the FIM Moto3™ Junior World Championship, which is joyous news for his rivals as he’s once again quick straight out the box. His deficit to Fenati was less than half a tenth, and his gap back to Tatsuki Suzuki (SIC58 Squadra Corse) in seventh a more sizeable 0.114.

Jason Dupasquier (CarXpert PrüstelGP) showed his step forward in 2021 was no flash in the Qatar pan as he was eighth, within a tenth of Suzuki and just ahead of last year’s Portuguese GP podium finisher Dennis Foggia (Leopard Racing) as the Italian took P9. Niccolo Antonelli (Avintia Esponsorama Moto3) completes the top ten fresh from his first podium since 2019 last time out, more fully fit than at any race in 2020.

The weather looks like it may improve for qualifying, but will the lightweight class face another damp patch lottery for FP3? If they do, it’ll be second in the standings Darryn Binder (Petronas Sprinta Racing), Deniz Öncü (Red Bull KTM Tech 3), rookie Izan Guevara (GASGAS Valresa Aspar Team) and veteran John McPhee (Petronas Sprinta Racing) heading through to Q2 directly as they complete the fastest 14 on Friday in that order. In a small twist of fate, McPhee denied Jeremy Alcoba (Indonesian Racing Gresini Moto3) by just 0.029 ahead of their pitlane starts following their spat in Qatar. The Scotsman was also the sole crasher on Friday, rider ok and remounting to head back to the pits.