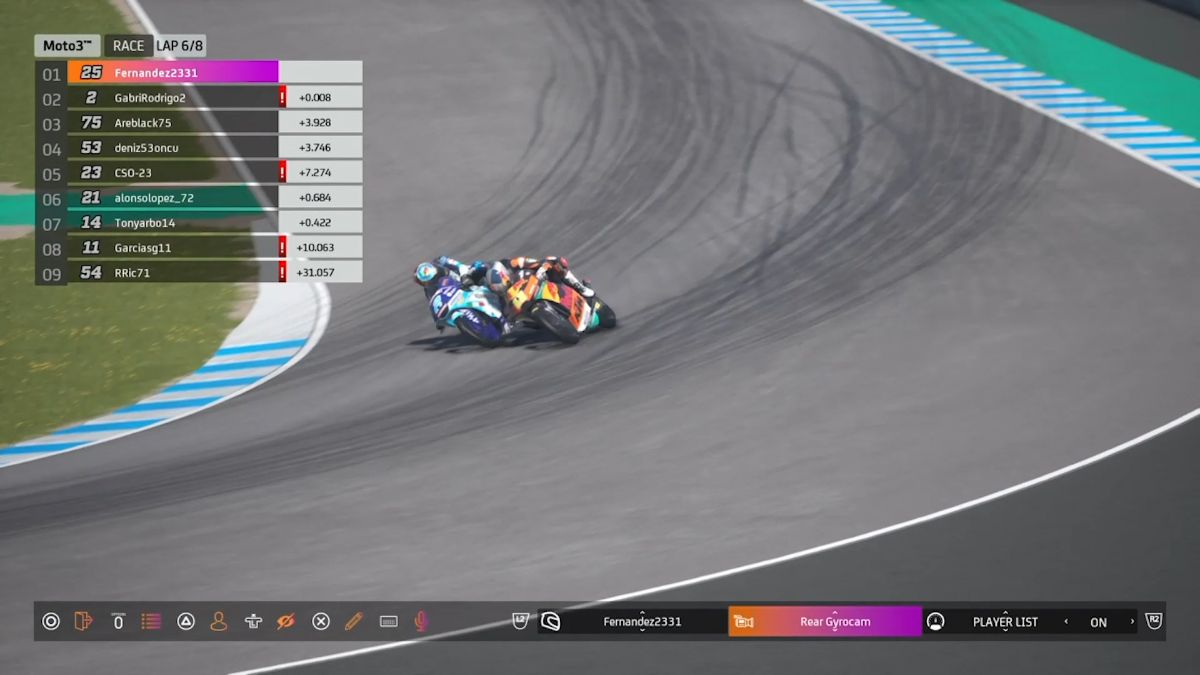 The Kömmerling Gresini Moto3 rider took to the top step after classic first virtual encounter for the lightweight class.

The victory came from pole but the start couldn’t have got much worse for Rodrigo, with the Argentine slipping down to almost last off the line. Deniz Öncü (Red Bull KTM Tech 3) and Alonso Lopez (Sterilgarda Max Racing Team) similarly had a tough start as they went down at Turn 1, with Dennis Foggia (Leopard Racing) the man taking over in the lead in the early stages. Unprecedented scenes then unfolded at Jorge Lorenzo corner however, with Foggia’s WiFi suddenly saying goodbye and with it, the Italian forced to say addio to the race lead…

Fernandez then took over at the front, with Rodrigo clawing his way back through the pack to P2 and the chase for the lead was on from then on. Fernandez was keeping Rodrigo behind him by just over a second, with Arenas roughly the same distance behind again, but by the start of Lap 4, the Argentine rider had reeled in the KTM in the lead and the battle for P1 began in earnest. Would the polesitter pick off his KTM rival straight away?

The answer for a couple of laps was no as Fernandez dealt with the increasing pressure well, but there was drama to unfold at Dani Pedrosa corner on Lap 6. Rodrigo got the run out of Turn 5 down the back straight and made a lunge for the lead up the inside, but contact was made and the race leader was down – Fernandez tasting the gravel trap and forced to rejoin just behind Arenas. Ultimately, the Aspar rider would hold him off, and the two completed the podium after Rodrigo crossed the line for the victory.

Deniz Öncü wasn’t too far off the podium in P4 as the leading quartet were split by 8.5 seconds, with Tony Arbolino (Rivacold Snipers Team) completing the top five in the first-ever Moto3™ Virtual Grand Prix race.

That battle for fifth between Arbolino, Lopez and Niccolo Antonelli (SIC58 Squadra Corse) was intense, and drama hit them on Lap 7 as the latter duo cleaned each other out at Turn 11, allowing Arbolino to cruise through to P5.

Gabriel Rodrigo: “I had been training a lot for starts, knowing full well that this was my weak point. But this Sunday, I don’t know why, it didn’t go as planned. It was a disaster! In any case, I did not give up. I came back, pushing Tony (Arbolino) a little and then Raul (Fernandez).

“I think I would have attacked him, but with a little more care! But I’m happy with the race and the most important thing is that we have had a g