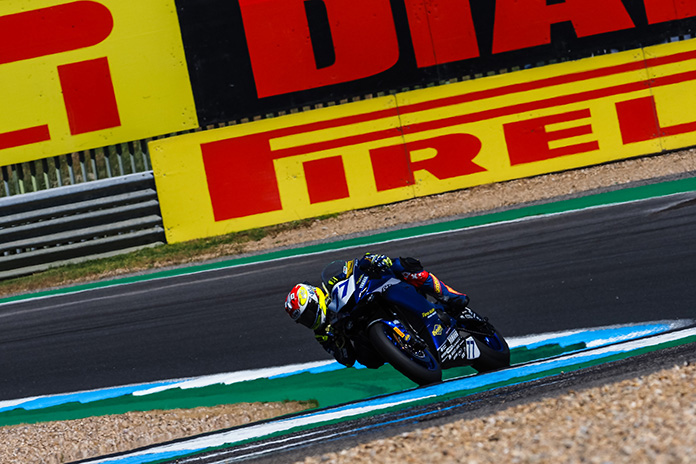 It was a dramatic day of action in the FIM Supersport World Championship as the paddock descended on the Circuito Estoril for Round 2 of the 2021 campaign, the Gaerne Estoril Round. Swiss rookie Dominique Aegerter (Ten Kate Racing Yamaha) usurped the rest of the field with a last gasp effort to top the timesheets after Friday’s two practice sessions.

It had looked like Jules Cluzel (GMT94 Yamaha) and teammate Federico Caricasulo would be at the top of the timesheets with nothing to separate the pair as the session came to a close. However, Aegerter put in a lap of 1’40.571s with just a few minutes remaining of the session to head the field ahead of Frenchman Cluzel by 0.164s. Caricasulo eventually finished in third despite looking like he was going to go faster than Aegerter later in the session, with the Italian also topping the morning running in Free Practice 1.

German Philipp Oettl (Kawasaki Puccetti Racing) finished in fourth place, just three tenths off Aegerter’s pace, while Manuel Gonzalez (Yamaha ParkinGo Team) was fifth in both sessions as well as the combined times; the Spanish rider yet again showing his consistent pace in WorldSSP. Christoffer Bergman (Wojick Racing Team) was sixth with the Swede showing strong pace in the early stages of Free Practice 2 by topping the times in the early stages of the session although he did have a crash at Turn 1 later on in the session.

Steven Odendaal (Evan Bros. WorldSSP Yamaha Team) was in seventh place, less than half a second away from Aegerter’s pace, showing how compact the field is in the 2021 campaign. He was just ahead of Finnish rider Niki Tuuli (MV Agusta Corse Clienti) who recovered from a crash at the final corner in Free Practice 1 to finish eighth in the combined standings, with 2019 Champion Randy Krummenacher (EAB Racing Team) and Italian Raffaele De Rosa (Orelac Racing VerdNatura) completing the top ten; all ten riders separated by less than 0.7 seconds after Friday’s action.

Sammarinese Luca Bernardi (CM Racing) was just outside the top ten and the first rider outside a second of the leaders, sitting 1.085s away from Aegerter. He was less than a tenth ahead of Hannes Soomer (Kallio Racing) with Turkish rider Can Öncü (Kawasaki Puccetti Racing) in 13th. Michel Fabrizio (G.A.P MOTOZOO Racing by Puccetti) was in 14th place ahead of Kevin Manfredi (Altogo Racing Team) who completed the top 15.