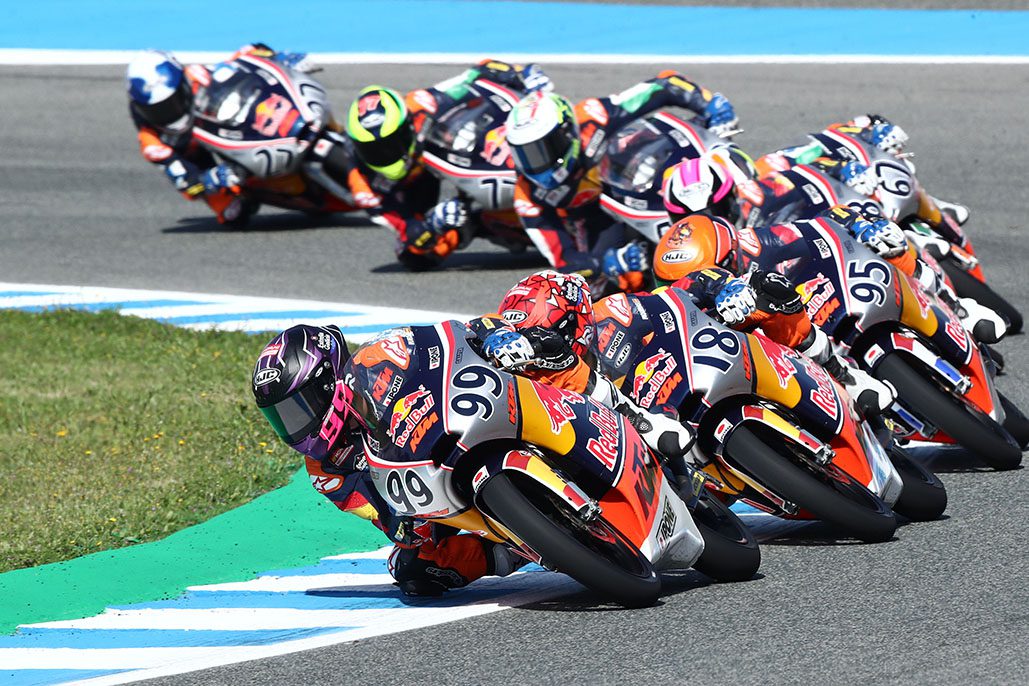 José Rueda crossed the line first for the third time running and extended his points lead.

But the 16-year-old Spaniard had to battle for every millimetre and took victory by just 0.018 seconds over fellow countryman Angel Piqueras in a photo finish where Collin Veijer was third and 1.653 seconds covered the top 7.

It had been that close all the way with the KTM RC 250 R’s swapping places at almost every turn. Rueda and Piqueras got away initially but could never hold the advantage at over a second.

In the second half of the race it was all with no one getting any kind of clear advantage.

Rueda with an almost perfect race
“No, not a perfect race,” he countered with his broad smile. “But is was a good race, a very hard race, difficult because I had a big battle with Piqueras and I am so happy with the result,” he admitted having managed to avoid the last lap track limits error that cost him the Race 2 in Portugal.

“I am going to talk to the guys about changing the bike a little bit for tomorrow,” he admitted. Change the suspension? “No not the suspension,” he said with a cagey grin.

And try and break away? “Well I might try but I know it will be very very difficult.”

Piqueras so close
“In the last laps it was so difficult with my foot, really hard,” admitted the 15-year-old who broke two toes when he fell in Race 1 in Portimão. ”I will go to the Clinica Mobile and I am sure they can help me for tomorrow. I’m happy that I managed second, I really tried and it was great to get the points.”

“The bike was very good, it was perfect.” So tomorrow, can you win? “Yes,” he said with absolute certainty and a broad grin.

Veijer with more to give
“It was a good race, at the beginning I wasn’t aggressive so we lost a bit but I tried to catch Piqueras and Rueda and we managed,” reported the 17-year-old Dutchman. “Then it started to be difficult because I could feel less grip.”

“Two laps to go I went into neutral in Turn 2, I lost a bit and so tried to go hard through turn 3 and 4 and nearly high sided. But on that lap I managed to catch them and on the last lap I was on the limit with Maximo. I managed to get P3 so I am happy with this.”

“The bike was good but maybe I will be more aggressive in the first part of the race and see what I can do.”

Max Quiles felt he could do it
“I felt very confident,” enthused the 14-year-old Spaniard after taking 4th. “In the first races I was a bit far away but this race I was in the group all the way. I put my mind on zero and I started to get some positions. I managed to get to first in some laps. I then braked too late at the end of the back straight, I looked , back saw the group and lost concentration for a second and went very wide.”

“I fought back to battle at the front but then in the last lap I had a bit of a slide, I lost one position and finally I was 4th. I will not change the bike, I liked it a lot, it was moving around in the final laps but that’s normal.”

Rico Salmela with something to find
“In the end I was at the back of the group,” explained the 14-year-old Fin who hung with the lead group all the way and crossed the line 7th. “One rider in front of me was losing time to the group and I had a bit of a battle to get past him. I made a pass on the last lap, then he passed me again and I got him again but we lost the group and I couldn’t catch them before the finish.”

“Tomorrow I will try and be closer to the front, I’m changing nothing on the bike, I like it.”

Harrison Voight slides out
The 15-year-old Australian was in the hunt at the front but fell early. “I’ll learn from it and move on to tomorrow. I just turned in too soon as I made the pass, the front’s gone, tried to get on the gas a bit and get it back but couldn’t. Simple mistake. I’ll probably make it a bit stiffer in the front for tomorrow, we’ll see.”