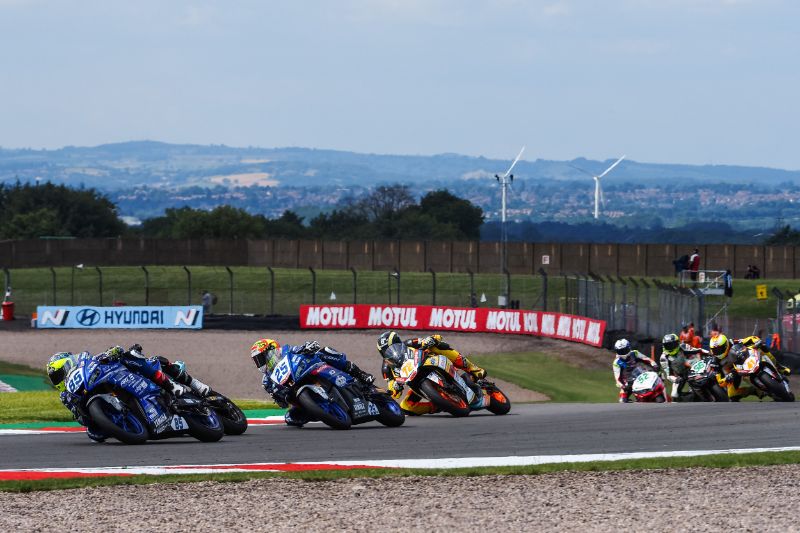 With WorldSSP300 championship contenders out of the race for various reasons, a new star was born at Donington Park.
Before the race had even started, there was drama, as pole-sitter Ton Kawakami (BCD Yamaha MS Racing) and teammate Andy Verdoïa had to start from the back of the grid, having failed tyre pressure tests, meaning the only rider on the front row of the WorldSSP300 grid was Galang Hendra Pratama (Semakin Di Depan Biblion Motoxracing). With Manuel Gonzalez (Kawasaki ParkinGO Team) out through injury and Scott Deroue (Kawasaki MOTOPORT) failing to make it through from the Last Chance Race, points were there for the taking.
It was a phenomenal opening lap, as Dorren Loureiro (Nutec – RT Motorsports by SKM – Kawasaki) was swerved into by 2018 runner-up Mika Perez (Scuderia Maranga Racing) on the start line and consequently crashed. Galang Hendra Pratama took the lead and held it for the opening lap. There was more drama out down the field, as Ana Carrasco (Kawasaki Provec WorldSSP300) crashed at the Melbourne Hairpin with Borja Sanchez (Scuderia Maranga Racing).
After that, the race settled down at the front with Hendra Pratama leading Bruno Ieraci (Kawasaki GP Project), although Andy Verdoïa from the back of the grid was now back in the mix, inside the top ten. Soon enough, he would be in third place and then, he took both Ieraci and Hendra Pratama in one fell swoop with eight laps to go. Following him through the order in the leading group was Hugo De Cancellis (Team Trasimeno Yamaha), with France leading and in second place.
As the leading group battled, it was fractured with two and a half laps to go, with Hugo De Cancellis coming from fourth to first at the Foggy Esses before crashing, wiping out Bruno Ieraci. Then, one lap later, Hendra Pratama crashed at the Melbourne Loop as he clattered into Jan-Ole Jahnig (Freudenberg KTM Junior Team).
On the final lap, Verdoïa was leading ahead of Kevin Sabatucci (Team Trasimeno Yamaha), who had ghosted up to the leading group. The Italian rider got ahead of Verdoïa at the Foggy Esses, with Nick Kalinin (Nutec – RT Motorsport by SKM – Kawasaki) in the mix too. However, in the final few corners, there were no changes and Sabatucci took the win to deny France a first win in the hands of a heroic Verdoïa.
Victor Steeman (Freudenberg KTM Junior Team) was in fourth ahead of teammate Jahnig, whilst Dion Otten (MTM Racing Team), Oliver König (ACCR Czech Talent Team), Koen Meuffels (Freudenberg KTM WorldSSP Team), Dino Iozzo (Nutec – RT Motorsports by SKM – Kawasaki) and Tom Bramich (Kawasaki ParkinGO Team).
With a first podium for an Italian rider in 2019, Sabatucci took the country’s third win in the history of WorldSSP300. It was also the third time in 2019 that the WorldSSP300 podium has featured three different nationalities.
Manuel Gonzalez holds onto his lead in the championship, with a 43-point lead from Ana Carrasco and Scott Deroue (Kawasaki MOTOPORT), who are both still tied on points. Gonzalez can mathematically win the championship at Portimao, such has been his dominance.
P1 – Kevin Sabatucci (Team Trasimeno Yamaha)
“It was a tough race. I knew that Andy was starting from the back but also that he was catching the front pretty fast. In the beginning, I was slow in some areas compared to other riders but staying with them, I was able to improve there. I knew that it was going to be a crazy race so I tried to stay calm and took the lead on the final lap! We made it and I am so happy! I think this weekend we did a perfect job”.
#GBRWorldSBK WorldSSP300 at Donington Park
1. Kevin Sabatucci (Team Trasimeno Yamaha)
2. Andy Verdoïa (BCD Yamaha MS Racing) +0.239
3. Nick Kalinin (Nutec – RT Motorsports by SKM – Kawasaki) +0.447
WorldSSP300 Championship Standings after Round 6
1. Manuel Gonzalez (ESP) Kawasaki (108 points)
2. Ana Carrasco (ESP) Kawasaki (65 points)
3. Scott Deroue (NED) Kawasaki (65 points)