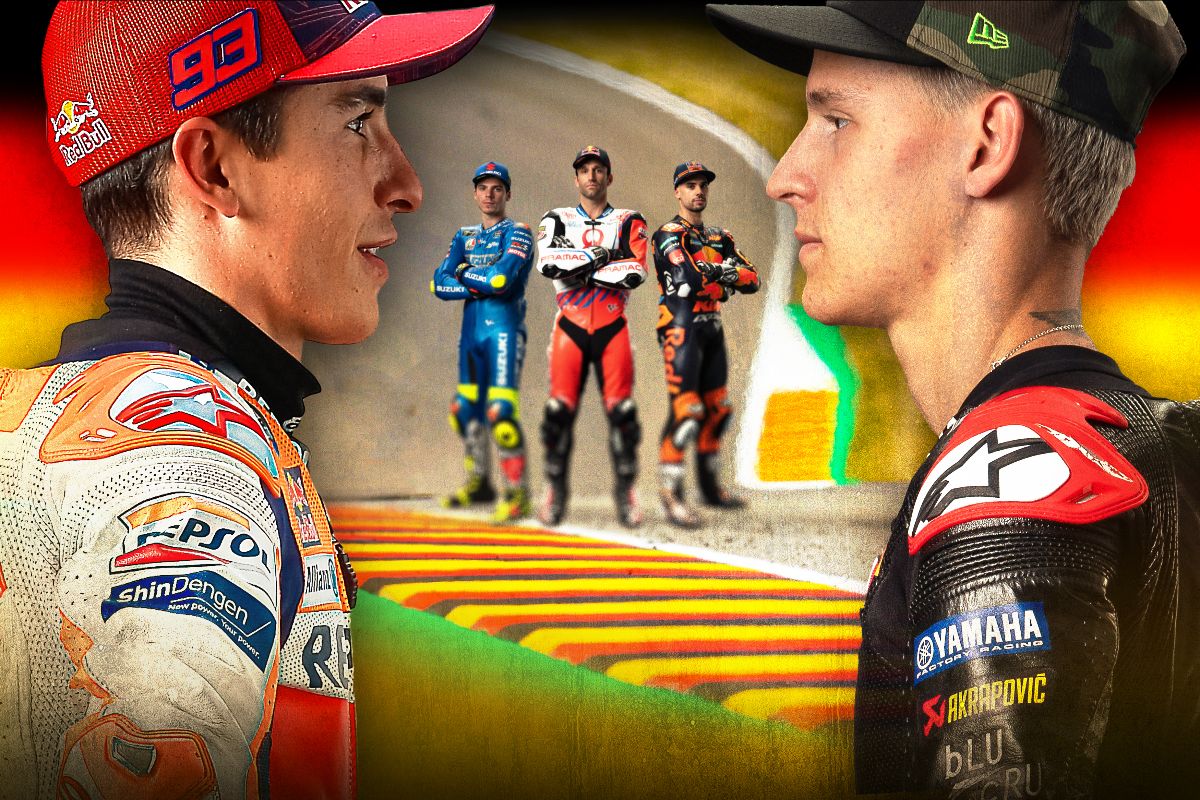 Marc Marquez has won seven in a row at the track in the premier class. If he can’t challenge for an eighth, who’s going to end his reign?

After a dramatic Catalan GP, the Liqui Moly Motorrad Grand Prix Deutschland beckons for the first race weekend in another back-to-back for the FIM MotoGP™ World Championship. The tight and twisty venue is a different challenge from most, and traditionally there has been a single King of the Sachsenring: Marc Marquez (Repsol Honda Team). With seven wins from seven in his time in MotoGP™ – and a few before that too – the number 93 has been almost unassailable at the track, but this time he arrives on the comeback from injury and the flashes of brilliance so far have been very much accompanied by some struggles for the eight-time World Champion. “Like the old Marc,” was his review of the laps he completed in Barcelona though, and on Monday in the post-race test he did more laps than anyone. So is it too soon to expect the King to return to the throne?

If he doesn’t, there’s a somewhat blank slate in his wake. Traditionally though, the next bike home after the winner has been a Yamaha in recent years. So will it be this time? Fabio Quartararo (Monster Energy Yamaha MotoGP) will be hoping so after a dramatic end to his race in Barcelona where race-winning pace translated into sixth in the final results after two penalties. He’ll want to gain that ground back, and teammate Maverick Viñales will want to gain ground full stop – something also true of Petronas Yamaha SRT’s Franco Morbidelli and Valentino Rossi as some tougher times continue in their garage.

Also traditionally, another Honda has sometimes joined Marc Marquez on the podium. The top rider for the marque as it stands is Takaaki Nakagami (LCR Honda Idemitsu) and he’ll want that good form for the bike at the track to translate into a kinder weekend in Germany after a dip recently. He has, after all, already taken a fourth place in 2021, as difficult as the year has been at times. Pol Espargaro (Repsol Honda Team) and Alex Marquez (LCR Honda Castrol) will likewise look to the past performance of the machine to give themselves a boost, too. And what did HRC find in the post-Catalan GP test?

The more unknown quantities, in terms of track records, go for the rest. Ducati, to start with the factory equal on points with Yamaha at the top of the Constructors’ Championship, have seemed to edge closer and closer to the front in Germany as their bike has been crafted to turn better and better. And this season, it’s seemingly better than ever. Jack Miller (Ducati Lenovo Team) praised the machine after his podium in Catalunya and offered a quick “we’ll see” regarding the Sachsenring, but 2021 so far says there’s more to be optimistic about than ever before. Francesco Bagnaia (Ducati Lenovo Team) will have a few eyes on him too, with the Italian’s riding style and corner speed a key talking point earlier in the year, but his Barcelona weekend a little more muted.

Johann Zarco (Pramac Racing), however, got the better of both last time out. The Frenchman was top Independent Team rider and top Ducati – as he is in the standings, although Miller especially is gaining some traction – and cut his gap to the top quite a bit after Quartararo’s two penalties. What can he do? He had a tougher time of it at the track on the Yamaha, or more so in 2017 compared to then-teammate Jonas Folger’s heroics, but Zarco won the Moto2™ race at the track in 2016 and was only 0.083 off doing the same the year before. So he knows his way around… can he hook it up in the premier class?

Ahead of all the Borgo Panigale machinery in Barcelona, however, was Miguel Oliveira (Red Bull KTM Factory Racing). The Portuguese rider put in an outstanding push on Sunday – and a smart one – to leave the Catalan GP with his first victory in factory colours, and he’s another with some good stats in his past at the track, just 0.066 off the win in Moto2™ in 2017 behind only Morbidelli. Teammate Brad Binder won the Moto2™ race the year after. As this is a track where the Austrian factory have no 2020 data and a best result outside the top ten given the sheer speed of their ascendancy, will it be more of an uphill struggle at this particular – and in some ways peculiar – venue? Or are the riders, mileage so far and updates to the RC16 ready to carry on where they left off?

Suzuki, meanwhile, have a couple of highlights that lend themselves to optimism – in addition to a bike that handles exceedingly well. First is a fourth place for Alex Rins (Team Suzuki Ecstar) on the grid in 2019, the last time we raced at the Sachsenring, although he didn’t finish the race and arrives fighting to be fit after a cycling accident ahead of Barcelona. But the other is his teammate – and the reigning Champion – Joan Mir’s seventh place in 2019. Looking back at the Majorcan’s record at the track in his short, sharp ascent to the top of the MotoGP™ world, it goes from Moto3™ win on the way to the title to best Moto2™ result at the time in 2018, a second place. And then straight to seventh as a MotoGP™ rookie – his second best premier class result at the time, behind only Barcelona where he took P6. Since then he’s become World Champion and Suzuki team Champions, so what can they do this time around at the Sachsenring now they’re established at the front?

Finally, for Aprilia the fight for the top five continues and will continue in Germany. Aleix Espargaro (Aprilia Racing Team Gresini) has been close to it but ended up equalling their best result in the MotoGP™ era, sixth, which speaks to an impressive season but one that remains fixed on a firm goal: the top five, and the podium. Aleix Espargaro sat out the post-Catalan GP test after crashing out of the race but did get his arm, following arm pump surgery previously, checked out. All is ok, and the number 41 will be gunning for more glory in Germany… can he crack that top five this time around?

MotoGP™ take on the Sachsenring on Sunday the 20th of June at 14:00 (GMT +2), with another 25 points in play and even more eyes than normal on Marc Marquez. Is there a new King of the Sachsenring soon to be crowned? We’re about to find out…