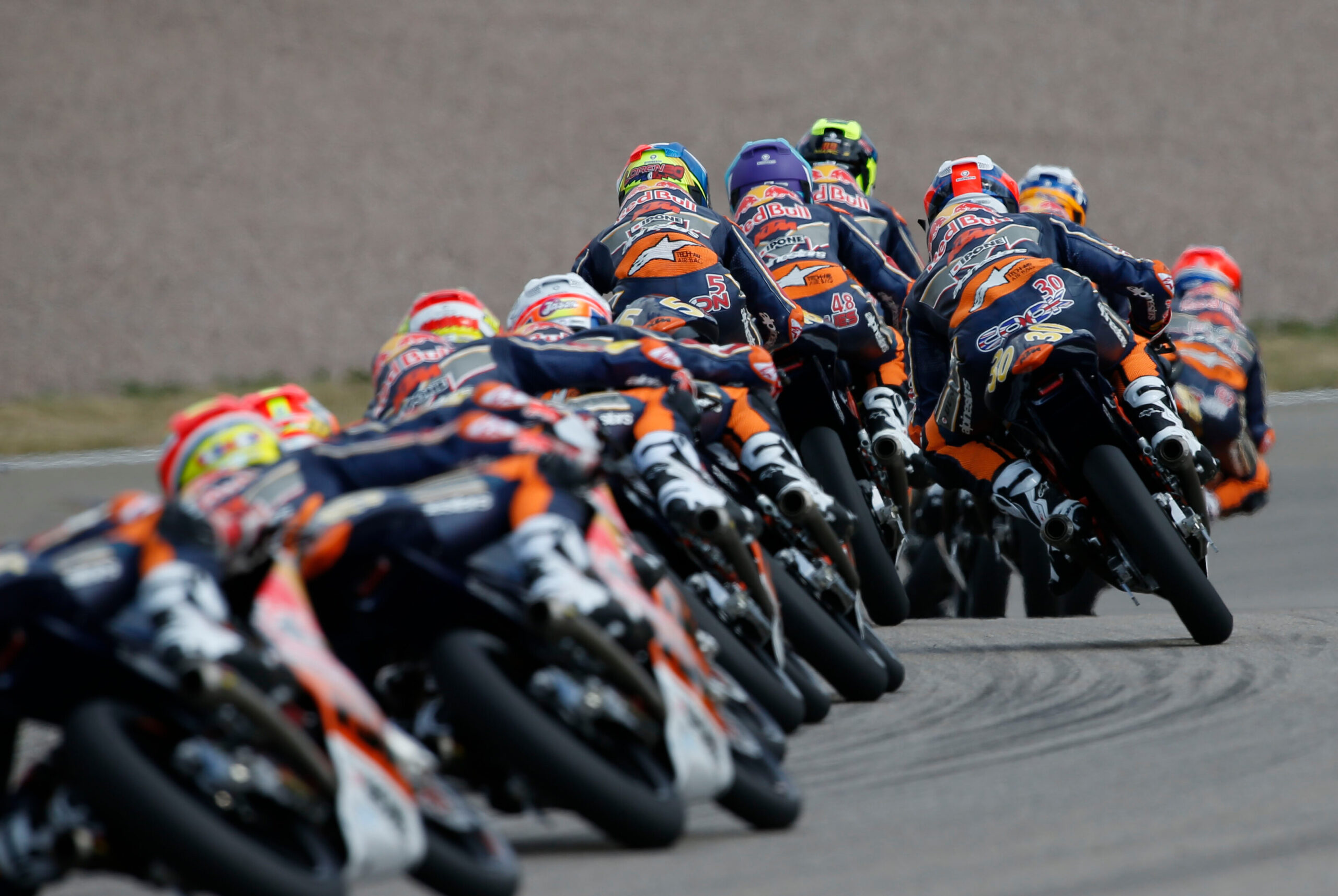 Races 7 and 8 of 14 take place in Germany this coming weekend as the Red Bull MotoGP Rookies Cup KTMs negotiate the twisting rollercoaster of the Sachsenring.

Intense is a word oft used in the Cup and it will probably punctuate every sentence as the 26 teens from across the globe try to pivot mid season into a winning second half.

Up front it is David Muñoz who has the points advantage after a great weekend in Mugello where he won on Sunday after taking second on Saturday. Having already won Race 1 in Jerez the 15-year-old Spaniard is 3 points ahead of David Alonso. The Colombian 15-year-old finally got back on the podium with 2nd in Race 2 in Italy after suffering a slight reversal of fortunes following the Portuguese double victory that kicked off his second Rookies Cup season in such fabulous style.

Holgado in a hurry
It is Daniel Holgado who sits 3rd in the Cup table just 6 points further back and the 16-year-old Spaniard arrives in Germany boosted by a points scoring ride in his first Moto3 World Championship Grand Prix in Barcelona. He seems to have done more leading than anyone else in the six Rookies Cup races run so far this season, has been super competitive and a touch unlucky only to have a single win and one 2nd place so far. He has been 4th on three occasions.

On the other hand Diogo Moreira has been on the podium 4 times but has yet to win. Thanks to an 8th and a 15th the Brazilian 17-year old is 13 points adrift of Holgado in his first Cup season.

Ortolá on for number 1
There are plenty of others also looking for a win at the Sachsenring, Iván Ortolá, the 16-year-old Spaniard had a win in his first Cup season, 2019, but this year has struggled to find that bit extra that would maker him a serious Cup challenger after finishing 3rd last season. It is not too late, he has been up front, was 2nd in Jerez Race 1 and 3rd on Sunday in Mugello but he is 41 off the lead so he needs to find that consistency to add to the pace he has never lacked.

Àlex Millan has made huge strides this year, his best results in 2020 were 8th places in both races of the season finale in Valencia. In his 2nd season the 16-year-old Spaniard has already scored 2 podiums with 3rds in Portimão Race 2 and Jerez 2. He stands 6th in the Cup chase after finishing 14th last year.

Bertelle better than his points
Just behind Millan in the points table are 17-year-olds Matteo Bertelle who led his home race in Mugello and Spaniard Marcos Uriarte who frequently runs up front. Both have to find out how to be in that position at the finish line. Uriarte managed 3rd in the first race of this season and Bertelle has been just off the podium but they need to take another step in their 3rd Cup season.

There is bound to be so much more drama at the Sachsenring, can Japanese 15-year-old Taiyo Furusato stun again as he did in Mugello with his Cup debut victory? Can someone else grab a moment of stardom? Collin Veijer, the 16-year-old Dutchman has shown sensational pace that has not been reflected in the results. 17-year-old Mario Aji seems to have most of Indonesia shouting for him but also has more speed than points so far.