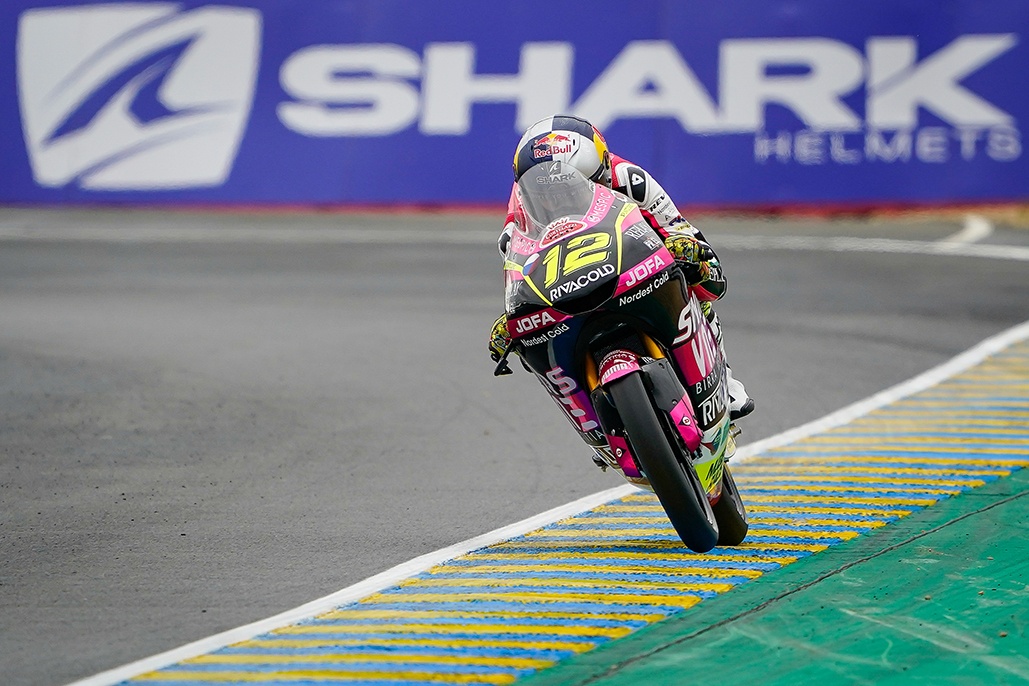 The Czech rider strikes late to take over at the top by just 0.039 as a wet morning gives way to a dry and busy FP2.

Filip Salač (Rivacold Snipers Team) got the best measure of the drying but still cool and difficult conditions in FP2 at the Shark Helmets Grand Prix de France, the Czech rider’s final lap in the afternoon proving enough to see him end the day on top and overhaul an ominous half-second gap previously enjoyed by Romano Fenati (Sterilgarda Max Racing Team). The Italian was left 0.039 in arrears in FP2 and overall, with John McPhee (Petronas Sprinta Racing) completing the top three.

FP1
FP1 was characterised by one thing: crashes. By the end of the wet and chilly session there had been 17 incidents, and it was 2019 winner McPhee who emerged on top as he beat fellow veteran Andrea Migno (Sky Racing Team VR46) to the honour by two tenths. Another experienced runner took third, with Championship challenger Albert Arenas (Gaviota Aspar Team) completing a top three split by four tenths.

The crashes – not crashers as some riders suffered more than one incident – were the biggest headline, however. The first to go down was, surprisingly, wet weather master Fenati when he crashed at Turn 4, before Jason Dupasquier (CarXpert PrüstelGP) went down at Turn 3 as he started his first flying lap. Red Bull KTM Tech3’s Deniz Öncü became the third rider to crash before five minutes had even been completed.

SIC58 Squadra Corse’s Niccolo Antonelli also crashed at Turn 3, as did Khairul Idham Pawi (Petronas Sprinta Racing). Alonso Lopez (Sterilgarda Max Racing Team) suffered a nasty-looking crash at Turn 2, before both Tony Arbolino (Rivacold Snipers Team) and Carlos Tatay (Reale Avintia Moto3) then crashed at the by-now ominous Turn 3. Sky Racing Team VR46’s Celestino Vietti had his first crash at Turn 4 not longer after, before World Championship leader Ai Ogura (Honda Team Asia) went down at the same place just over ten minutes later. Next up it was a second incident for Antonelli and a first for Sergio Garcia (Estrella Galicia 0,0) as they hit the deck at Turn 14 a few minutes apart, before Raul Fernandez (Red Bull KTM Ajo) ended up in the gravel trap at Turn 10.

In the closing stages, Gabriel Rodrigo (Kömmerling Gresini Moto3) was the final man to go down at Turn 3 before Stefano Nepa (Gaviota Aspar Team) highsided at Turn 2 and Dupasquier went down again at Turn 14.

After that shuffle, Salač kept it upright for fourth on the timesheets, half a second clear of Fernandez in fifth. Leopard Racing’s Jaume Masia was 1.667 seconds adrift of Migno but up in sixth, with Garcia and Nepa seventh and eighth despite their crashes. Rounding out the top ten were impressive rookie Yuki Kunii (Honda Team Asia) and veteran compatriot Kaito Toba (Red Bull KTM Ajo).

FP2
By the end of play, the quickest lap in the afternoon was 11 seconds quicker than McPhee’s morning masterpiece, making FP2 and the combined timesheets interchangeable. Salač vs Fenati was the duel at the top for much of the last half hour of the day, but the Czech rider’s 1:44.820 means he ultimately leads the provisional Q2 entrants. Fenati is forced to settle for second but had a good consistent run at or near the top, with McPhee retaining a place in the top three overall after backing up his FP1 pace with some serious speed in the afternoon too. The Scot also spent some time on track with teammate Khairul Idham Pawi as we saw some Petronas Sprinta Racing formation running in FP2.

Jaume Masia was on a charge late on, duelling McPhee at the top for a while before ending up P4 overall, with Migno completing the top five on Friday and proving another with consistent speed in both conditions. The number 16 was also the last man within a second of Salač’s timesheet-topping scorcher, if scorcher is the word for it at a very cool Le Mans.

Pawi slots into sixth overall as the Malaysian got back into the mix in the top ten after a tougher time of it of late, ahead of Championship leader Ai Ogura as the number 79 pipped Celestino Vietti by just 0.006. Niccolo Antonelli was only another few hundredths off in ninth, with rookie Yuki Kunii impressing once again as he completes the top ten overall following a P10 in FP1 to boot.

After 17 incidents in FP1 – and a few names crashing twice – the afternoon was comparatively docile, with no one taking a tumble at all and that, as well as the laptimes, testament to the improved conditions. Will they improve again for FP3 or are Friday’s fastest 14 heading through to Q2? If no one can go quicker on Saturday morning it’ll be Gabriel Rodrigo, Deniz Öncü (Red Bull KTM Tech 3), Albert Arenas and Sergio Garcia joining the top ten in heading straight through – but anything can still very much change overnight…