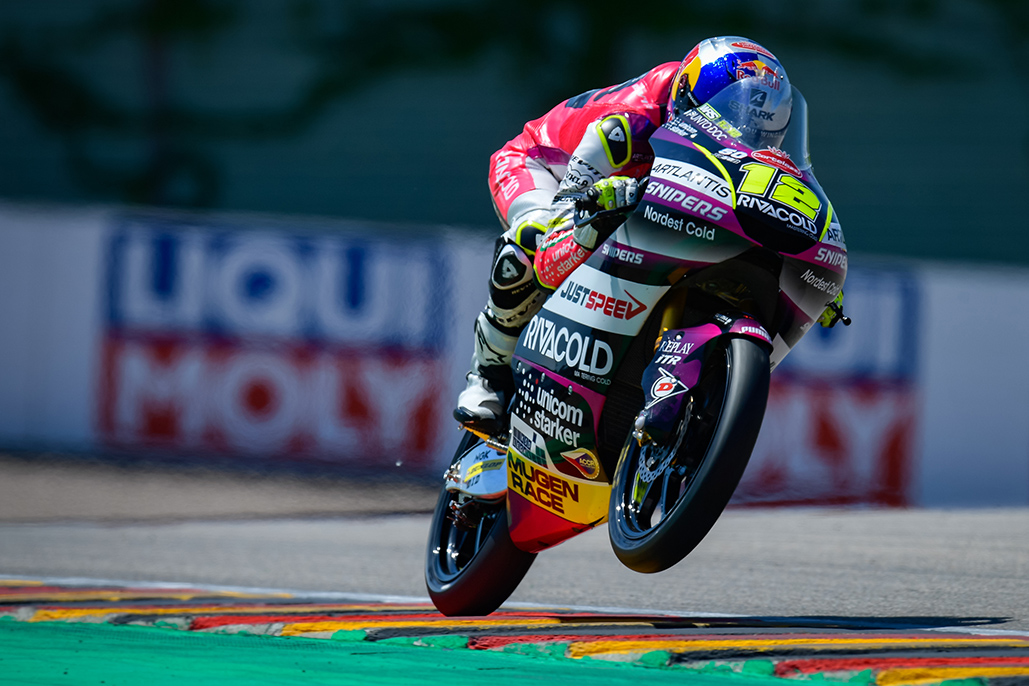 The Czech rider heads the grid for the first time in his career, with Foggia and Suzuki alongside as the top three in the Championship are left with some work to do on Sunday.

The top three in the Championship all start outside the first four rows, with a charge potentially on the cards on Sunday…

Q1
Darryn Binder (Petronas Sprinta Racing) topped Q1, but the South African stole more headlines after his quickest lap. Towards the end of the session, he collided with Joel Kelso (CIP Green Power) and then crashed – something that would soon also have ramifications in Q2. But he was fastest, joined by Deniz Öncü (Red Bull KTM Tech3), Jaume Masia (Red Bull KTM Ajo) and Yuki Kunii (Honda Team Asia).

Q2
One of the biggest headlines came quickly, and it wasn’t on the timesheets. For irresponsible riding, Darryn Binder was black-flagged and would take no further part in Q2 – relegating him to P18 on the grid. The South African also has a ride through for the race. Deniz Öncü (Red Bull KTM Tech3) also crashed early, rider ok, but putting a dent in his Saturday.

Meanwhile at the front, it was Kaito Toba (CIP Green Power) leading the way after the few minutes, but Foggia came through to quash that not long after. Salač was on a charge though, and the Czech rider shot to the top with the first 1:26 of the session… and it would turn out to be the only 1:26 of the session. After taking a first podium at Le Mans, he now takes his first pole position ahead of Foggia and Suzuki as some late yellow flags put paid to some laps for the rest.

The Grid
Salač heads away from pole for the first time ahead of Foggia and Suzuki, with John McPhee (Petronas Sprinta Racing) missing out on the front row but heading up the second in fourth. Alongside him, Toba starts fifth as the top KTM despite his crash. Sixth place goes to an incredible performance from Lorenzo Fellon (SIC58 Squadra Corse), with the French rookie taking his best grid position by a mile – and the best for a French rider in Moto3™ since 2017.

Andrea Migno (Rivacold Snipers Team), Öncü and rookie Izan Guevara (Gaviota GASGAS Aspar Team) – who has never ridden the Sachsenring before – are next up, with Championship leader Pedro Acosta (Red Bull KTM Ajo) down in P13… and his closest challenger in the standings, Barcelona winner Sergio Garcia (Gaviota GASGAS Aspar Team) right next to him. Xavier Artigas (Leopard Racing) locks out Row 5.

Yuki Kunii (Honda Team Asia) takes P16, ahead of a tough 17th for Jaume Masia (Red Bull KTM Ajo). The number 5 is third in the standings, but those just ahead of him are only just ahead on the grid in Germany, too. Can they charge through?

The Sachsenring is ready for another Moto3™ showdown, and this time the slipstream might not quite be the decider compared to Catalunya. Will it be another group battle or can anyone escape? We’ll find out from 11:00 (GMT +2) local time on Sunday!

Filip Salač: “I’m really happy that I’m here with these guys, another dream came true for me and I’m happy about it. I didn’t expect it because yesterday in FP2 in hot conditions like qualifying I was struggling a lot, unable to do my rhythm and go fast. I just wanted to go through to Q2, I did that and was fifth and the feeling was good, then on new tyres in qualifying I gave 100% from the beginning, setting my fastest laptime and there were some yellow flags, I was a bit lucky but I’m so happy about pole and it’s a good position for tomorrow’s race.”