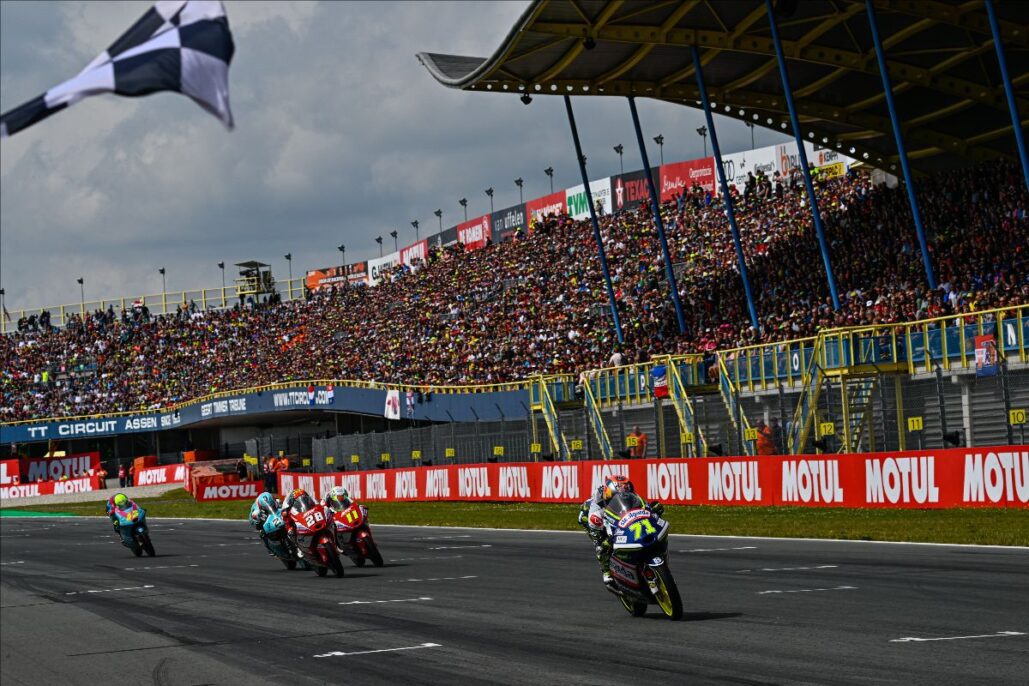 The Japanese rider takes to the top step for the first time as Guevara and Garcia complete the podium to tighten the standings even further.

Ayumu Sasaki (Sterilgarda Husqvarna Max) is now a Grand Prix winner! The Japanese rider put in an impressive performance to come out on top in a classic Moto3™ showdown at the Motul TT Assen, taking the win ahead of Izan Guevara (GASGAS Aspar Team) and Sergio Garcia (GASGAS Aspar Team). Some drama hit for Dennis Foggia (Leopard Racing) as he crashed out, and Jaume Masia (Red Bull KTM Ajo) likewise after the number 5 suffered contact on the final lap.

Tatsuki Suzuki (Leopard Racing) nabbed the holeshot ahead of a fast-starting David Muñoz (BOE Motorsports), only just edging the Spaniard out into Turn 1. But Sasaki was quick to take back over at the front and Guevara quick to follow into second as the classic Moto3™ freight train began. However, a smaller group was initially able to break away – and then the first drama hit for Foggia as he was given a Long Lap for a shortcut at the final chicane.

That dropped him back into the chasing group, where Garcia was already tucked in trying to push forward, along with John McPhee (Sterilgarda Husqvarna Max). And the Brit and his fellow veterans got the job done, bridging the gap to make another freight train. That created another classic fight at the front, and then the second drama hit for Foggia. A brush with Muñoz sent the Leopard rider wide, and he was unsettled on the kerb before crashing out.

The chopping and changing continued, but Sasaki led onto the last lap, with Suzuki shadowing and Masia into third as Guevara got shuffled back. Suzuki struck briefly but the number 71 hit back, but then huge drama hit the final lap. Muñoz went for an optimistic for a move on Masia and instead, skittled the number 5 out – earning himself a Long Lap for Silverstone – and McPhee crashed just behind in his own incident.

At the front, Sasaki was clear as Guevara and Suzuki went toe-to-toe, with Garcia able to close up too. By the final chicane, Sasaki had just enough room to cross the line for his first Grand Prix win, and Guevara muscled through on Suzuki. Garcia then attacked the Japanese rider to gas it past on the left, the Championship leader retaining that moniker by just 0.007.

Sasaki becomes a Grand Prix winner, Guevara cuts the gap to just three points off the top and Garcia takes yet another podium under increasing pressure, with Suzuki just left out of the party.

Xavier Artigas (CFMoto PrüstelGP) completed the top five with a slightly under the radar but impressive ride, the last rider in the front group who saw the flag after the last lap drama.

Daniel Holgado (Red Bull KTM Ajo) overcame a Long Lap given for crashing under yellows in practice to take sixth, just heading the second group ahead of Stefano Nepa (Angeluss MTA Team). There were a few more tenths back to Ryusei Yamanaka (MT Helmets – MSI), who just beat Deniz Öncü (Red Bull KTM Tech3) and Kaito Toba (CIP Green Power). With ninth, Öncü retains his record as the only rider in Moto3™ to score in every race so far this year.

Riccardo Rossi (SIC58 Squadra Corse), Ivan Ortola (Angeluss MTA Team) and Lorenzo Fellon (SIC58 Squadra Corse) were next up, ahead of Carlos Tatay (CFMoto PrüstelGP) classified 14th after two Long Laps from Germany and a three-second penalty for track limits. Andrea Migno (Rivacold Snipers Team) completed the points after a Long Lap and a double Long Lap after failing to comply with the first.

It’s just three points in it as Moto3™ heads into the summer break and then Silverstone, with the GASGAS duo looking like they’re going to remain the riders to beat. But can Sasaki continue his form at the British GP? We’ll find out in a few weeks!

Ayumu Sasaki: “It took a long time, a lot of time training. Every day sacrificing and finally I get to win the race, it’s amazing. This year has been difficult with injury but we came back very strong. The bike was very good, everything was perfect today. I saved my tyre very well today behind Izan and the last three laps I tried to go in the front because I had great pace.

“Finally to win the race is unbelievable. I want to say thanks to everyone ho supports me, to my family, I haven’t seen them in a while, my family, and now I can bring back the winning trophy with me so it’s good. Now into the summer break and hopefully second part of the season will be better than the first part of the season.”