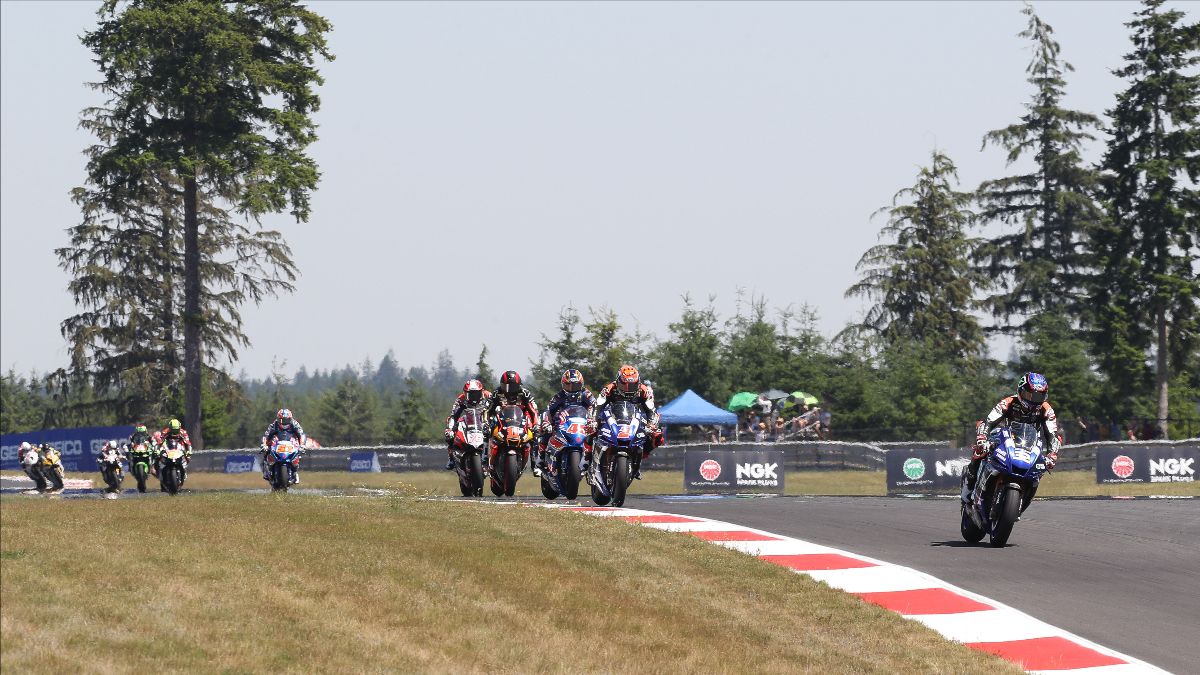 The most positive of the wannabe challengers to Jake Gagne in the 2021 MotoAmerica HONOS Superbike Series can take a smidgen of hope to WeatherTech Raceway Laguna Seca in two weeks that the Fresh N’ Lean Attack Performance Yamaha rider only beat his teammate Josh Herrin by 4.4 and 5.6 seconds, respectively, in the two races at Ridge Motorsports Park.

Gagne won his seventh straight HONOS Superbike race on a flaming -Sunday in the Pacific Northwest as record, triple-digit temperatures scorched the area, making the racing a survival of the fittest.

At least on track, Gagne (“the gnarlier the better”) was definitely the fittest and he led into turn one only to find his teammate Herrin too close for comfort as the two very nearly came together.

Once the turn-one melee sorted itself out, it was clear sailing for Gagne as he established his normal lead and then maintained it to the finish.

“I didn’t get the best jump,” Gagne said. “I didn’t get a jump like I did yesterday. I saw his (Josh Herrin’s) wheel coming up around the outside of me. He threw it in one, and I threw it in there, too. It was good to see a wheel and do some racing, because it was kind of a lonely one yesterday. I knew these boys would step it up today. We made a couple changes today. Made the bike a little bit easier to ride. With how hot it is, you can’t just go down there and try to throw down the first couple laps. You just got to ride and just put the bike in a place where it’s comfortable and not use up these tires too much. Once on my pit board I see just a (plus) .5 or something, I know probably Josh (Herrin) can’t stick it in from a half a second away, so that just allows me to kind of run my lines, relax. So, it was nice. I enjoyed the heat out there. It was hot. It was probably one of the hottest races I ever remember, but I feel really good. The gnarlier the better. I like it. Again, hats off to the Fresh N’ Lean Attack Yamaha. The boys work hard and no matter how much we win by or if we barely win, we’re going to keep working harder to try to do what we know we can do, so hats off to those guys and all the fans. It was good to have fans back here in Washington after being alone here last year, especially in this heat. They stuck it out in record-breaking heat up here. Roll on to Laguna. I love that track. Let’s do it.”

Herrin gave it his all and ended up second for the second straight day, the 2013 AMA Superbike Champion, giving a lot of the credit for his newfound speed to new riding coach Josh Hayes.

“We all talked before the race, me, Richard (team owner Stanboli) and Jake (Gagne),” Herrin said. “He’s like, if you’re there, let’s not do any dumb moves until you guys get a break. It all went out the window. I just saw an opportunity. I knew Jake was going to be going fast today. I just wanted to honestly try and get in his head a little bit and just do something to stir up the mix a little bit. Maybe it worked, maybe it didn’t. I don’t know. I got lucky that I didn’t get passed by more guy. It was just a bonehead – not bonehead. It wasn’t a dumb move. I was in control, but it just could have cost me a lot more than it did. I’m overall super happy with the weekend. I think we’ve turned my year around. This is the best I’ve been riding since ’18. Jake is just a little bit better right now. I’m definitely going to go back, keep working. Good thing is I wasn’t tired in the race physically. Mentally, it was just draining from the heat. That’s the biggest plus to me other than obviously the finish. I’m super happy with how everything has been going with Josh Hayes this weekend. It’s pretty insane how much one person can help your program.”

Third place went to Warhorse HSBK Racing Ducati New York’s Loris Baz, the Frenchman struggling to ride a difficult Ducati Panigale V4 R in the heat around the 2.47-mile racetrack. It was Baz’s third podium finish of the season.

“We’ve been the fastest we’ve ever been on this bike since Thursday,” Baz said. “I felt so comfortable on the bike every day. We still have to work. It’s obvious. I was really thinking that I could be faster in the race, especially yesterday. I had a good feeling on the right side, but we had the rough tire, and the left side was so hot I nearly highsided 10 times. I just tried to bring it home in fourth place yesterday. Today, I started not too bad, but I was hoping to be able to come back at the end because we had such a great pace all weekend. I rode all weekend with 10, 15, 20 laps tire, even 25 laps front tire and I was able to do some low 40s. It was just impossible in the race. I just had no feeling. I think the setup window on this bike is just so narrow. It’s the first time we raced this bike in that heat. We’re just too slow at the moment compared to Jake (Gagne) and Josh (Herrin) today. I’m lucky Cam (Petersen) had a DNF (actually, he was slowed by an issue but still finished sixth) and I could finish on the podium. We’ll continue working hard with the team. We work harder than ever. This bike was hard to ride today. I had arm pump mid-race, but I never gave up. Try to come back and find a solution. I tried all the maps that the guys gave me, and it was not enough. We try again in Laguna.”

Westby Racing’s Mathew Scholtz improved to fourth from his fifth-place finish on Saturday, the South African just two seconds clear of Scheibe Racing BMW’s Hector Barbera. It was the Spaniard’s best finish thus far in his debut season of racing in the MotoAmerica Series.

Yesterday’s third-place finisher Cameron Petersen was fighting with Baz for third again when he was slowed by a technical issue that pushed him down the order to sixth. He ended up some 20 seconds ahead of his M4 ECSTAR Suzuki teammate Bobby Fong.