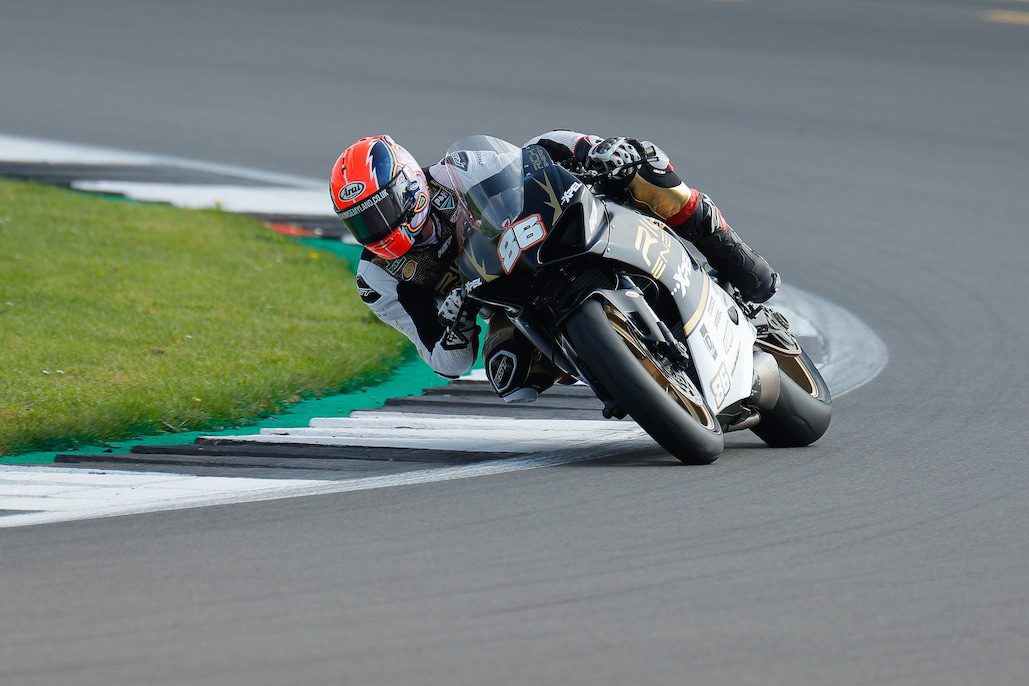 David Shoubridge (Rich Energy Ducati) started the season in fantastic style dominating the opening round of the Ducati TriOptions Cup with a double win.

1st Place – David Shoubridge (Rich Energy Ducati)
“A very long-awaited win. We’ve not had a race win since 2019 at Cadwell, despite being at the front for the last couple of years, so this win was very much needed to keep the momentum going, so it was a golden start to the new season. We look forward to keeping the form and grabbing as many wins as we can this season.
It’s nice to have a couple of guys come you from BEMSEE, Glenn Walsh and Phil Baker. When they get to grips with the Ducati, they’ll be up there so it’ll be interesting to see their journey.
It was so nice to be back in the Ducati Tri-Options Cup for another year dicing with our friends.”

2nd Place: Tom Tunstall (Motorcycle Race Parts)
“Today was our first race with the Ducati, it’s still early days with the bike, it’s a brilliant bike. We’ve still got to get the best out of it. We got a reasonable start off the line, pulled a gap, and tried to get into a rhythm, not found it yet but we’re getting there.  I had a decent ride; it wasn’t a lonely race as I had some company early on but I managed to chip away and hold a gap to Dave.
It was a good first race to get under my belt and I really enjoyed it.”

3rd Place – Matt Jones (Dragon Racing)
‘What can we say about Race 1! I didn’t have the best start dropping from 4th to 8th but after a strong battle I managed to get to the front of our pack, and I felt really strong sat in 3rd with my times constantly getting quicker. I could see I was catching 2nd but unfortunately the red flag came out, so I wasn’t able to push on, but I am thrilled with gaining my first BSB podium in 3rd!

David Shoubridge (Rich Energy Ducati) started from pole after setting the fastest lap in race 1 the first day. The race was full of incidents with two red flags and one restart.

Shoubridge raced away from the first start and soon began to pull away before the red flag came out on lap 7. The riders lined up for the restart and this time it was Max Lofthouse (JDF Racing) who got off to a flyer, leading for three of the six lap sprint race.
With Shoubridge hot on his heels, he took the lead on lap four and pulled out a healthy lead to the chequered flag. Although Lofthouse came over the line in second, unfortunately he was disqualified due to a tyre infringement.  That promoted Tom Tunstall (Motorcycle Race Parts) in to second place with another series rookie Mark Bridger (Moto46) grabbing a podium in his debut BSB weekend.

David Shoubridge (Rich Energy Ducati) 1st Place
“What a race! Where do I start? I wanted to get my head down at the start of the race and pulled out a bit of a lead. I wanted to try and test myself to get my head down from the start and get a quicker lap time but after a couple of laps and not achieving that I had a nice gap to second place, so I didn’t want or need to push on. Then the red flag came out and what a restart! A six-lap dash, I made it hard for myself running too deep in to Brooklands, not intentional on the first lap and it was great to see Max take the lead. It gave me a chance to use my race craft and think about where I was stronger. He took the fight to me and made it difficult to pass him. I loved every minute of and well chuffed to come away with the double on the Rich Energy Ducati. It was also good as my secondary sponsor Expell was there to see it too. Let’s take it on to the next round and see what we can do.”

Tom Tunstall (Motorcycle Race Parts) 2nd Place
“Race two was a bit hectic really with it being shortened due to the red flag coming out. I was just struggling with the bike getting up to speed as I’m not familiar with it yet, so it didn’t really play in to my hands but I really enjoyed the first weekend on the bike and looking forward to getting closer to Dave. Congratulations to Max, a shame about the issue with the tyre sticker. It was  a good solid weekend and itching to go for the second one”

Mark Bridger (moto46) 3rd Place
“Unfortunately I damaged my front tyre in the race One crash so I had to sacrifice a new rear tyre in exchange for a new front (which meant I had to start race 2 with the same rear I used for race 1) .Race 2 was good fun with no rear grip and some good battles with a few of the guys,  people falling off all over the place and it was a battle to stay on at times. It was a bit scruffy from me but great fun and brilliant racing and far more than I expected on my first round
Must say a big thanks to Moto46, Stevenage machine tools Ltd, Abrasive services Neil, Jim, Paul. Without their help none of it is possible”