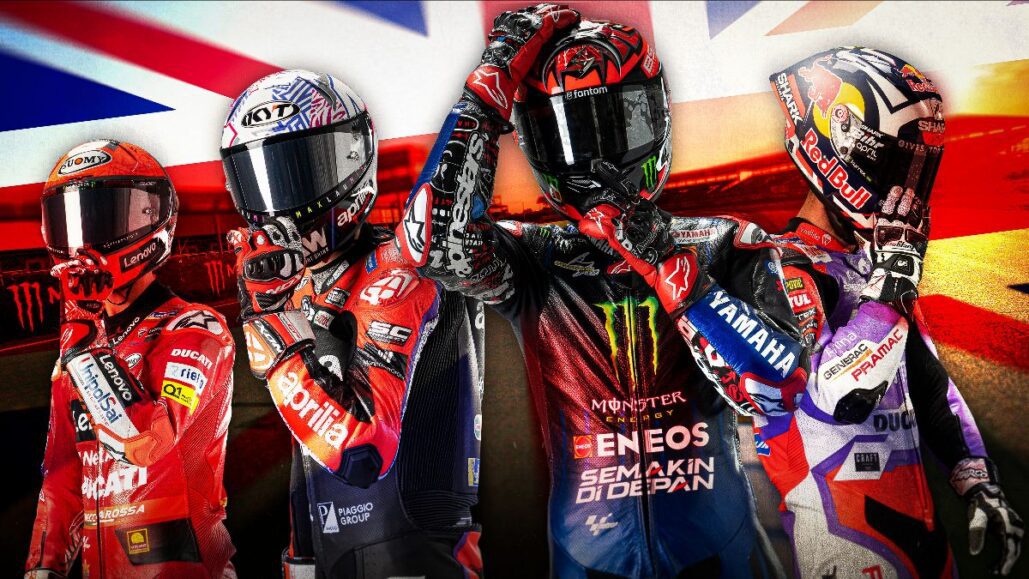 MotoGP™ returns to the British behemoth for one of the fastest race weekends of the year.

After some well-deserved R&R, MotoGP™ is ready to get back out on track and what a place to do it. Silverstone Circuit, one of the fastest venues of the season, has staged some true classics since MotoGP™ returned to the track in 2010, and there’s no reason not to expect another this year. Marquez vs Lorenzo. The Rossi wet weather masterclass. Viñales’ Suzuki history-maker. Rins vs Marquez. Are you ready for more?

Heading in, there remains a headline hanging overhead for the most successful manufacturer at the track: Yamaha. After his rare mistake at the TT Circuit Assen, Fabio Quartararo (Monster Energy Yamaha MotoGP) has a Long Lap penalty to serve this weekend – but with his form, Yamaha’s record at the track and plenty more, will that prove a barrier to the reigning Champion’s hopes at victory?

Elsewhere at Yamaha, it will be a big challenge for rookie Darryn Binder (WithU Yamaha RNF MotoGP™) as he takes on the venue for the first time in the premier class, and teammate Andrea Dovizioso, a former winner at the track with different machinery, will want his record to give him a boost as the season gets back in gear. Franco Morbidelli (Monster Energy Yamaha MotoGP™) likewise, as his difficult run continues. Can the second half of the season see his luck turn around?

Over at Aprilia, that turnaround is already well underway since our last visit to Silverstone. It’s been nothing short of incredible watching the Noale factory go from their first MotoGP™ era podium at the 2021 British GP to now fighting for the Championship, winning a race and having both riders on the podium. Aleix Espargaro (Aprilia Racing) will be confident of a serious chance at the win this weekend, on a stunning run and after a truly stunning recovery at Assen, and with key rival Quartararo serving that Long Lap the number 41 will be the first looking to capitalise. And Maverick Viñales, now a podium finisher with three factories, turned his great record at Assen into serious speed with Aprilia – and he’s got a serious CV at Silverstone. Can the Noale factory put two bikes on the MotoGP™ podium for the first time?

For Ducati, and Francesco Bagnaia (Ducati Lenovo Team), Assen was the perfect sign off on the first half of the season as the Italians took the win. After a crash out in Germany it was exactly what was needed, and Bagnaia may still face quite a deficit in the title fight but an error-free number 63 is always a serious contender. Can he keep it rolling at Silverstone and gain back a few more points in the Championship? Teammate Jack Miller will also be eager to get back on the podium after losing out late in the Dutch TT, but there was another Ducati on that podium: Marco Bezzecchi (Mooney VR46 Racing Team).

Bezzecchi has been the standout rookie in many races so far in 2022, but after his stunning rostrum finish at Assen he’s now well ahead in the Rookie of the Year standings and a serious rider to watch. Can he put in another challenge for big points in the British GP? Teammate Luca Marini has also been gaining some traction and form this year, with Silverstone another opportunity for him to challenge further forward too.

At Prima Pramac Racing, Johann Zarco remains in that Championship top five and can never be counted out of the fight for a trophy, and Jorge Martin will want to continue building on his return to form after overcoming injury earlier in the year. And Martin on form is always formidable. Then there’s Gresini Racing’s Enea Bastianini, still very much a presence in the upper echelons of the standings but looking for a little more consistency after his earlier glory in 2022. Can he challenge, and can rookie teammate Fabio Di Giannantonio turn his flashes of pace into more consistent points? In amongst those battles, the Martin vs Bastianini duel for a Ducati factory seat also rolls on…

Another factory no stranger to winning at Silverstone is Suzuki. It’s been a tougher year since the announcement the Hamamatsu outfit are to depart MotoGP™, but their record at Silverstone has been impressive. The aforementioned Alex Rins (Team Suzuki Ecstar) vs Marc Marquez British GP showdown was a true spectacular, and the Suzuki rider was also on the podium at the track last year. Can he do it again? It’s not a stop-start track so it suits too, and Rins’ record more than does so. Teammate Joan Mir will also have eyes on the prize and will be keen to add to his podium count. Qualifying remains a hurdle for the Hamamatsu factory though, so what can they do at Silverstone?

At KTM, the goal will remain a clear one: keep making progress. There have been some solid signs of it since a tougher pre-season, and Brad Binder (Red Bull KTM Factory Racing) keeps his Sunday stunners coming – he was in the fight for fourth at Assen and is sixth in the Championship. Teammate Miguel Oliveira (Red Bull KTM Factory Racing) has also made strides, and both KTMs went through from Q1 at the Dutch TT. Can they keep it rolling at the British GP?

Finally, for Honda there is progress on the cards too. After summer break to heal up, Pol Espargaro (Repsol Honda Team) will be back at something a lot closer to full power and aiming high, having made a breakthrough last year at the track with a stunning pole position, denying Bagnaia and Quartararo. Stefan Bradl will be back in for Marc Marquez as the test rider does double duty, and Alex Marquez (LCR Honda Castrol) and Takaaki Nakagami (LCR Honda Idemitsu) will want some results after a likewise tougher run. Can Silverstone start a turnaround? Last year we saw Yamaha, Suzuki, Aprilia, Ducati, Honda and KTM within the top six at Silverstone, which marked the first time there were six different manufacturers in the top six since 1972…

The timetable is a little different for the Monster Energy British Grand Prix, with MotoGP™ heading out before Moto2™. After seven different winners on the last seven visits, the race is on to see if there will be a magic number eight. Find out when the lights go out for the premier class at 13:00 (GMT +1) on Sunday!