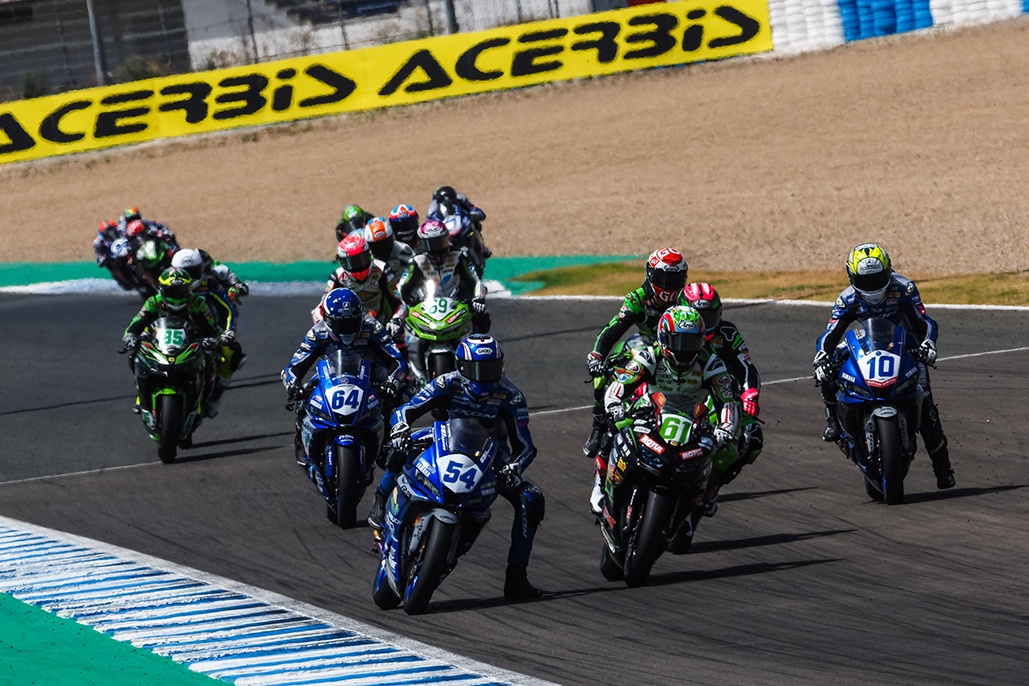 Second WorldSSP300 race of Spanish Round full of drama and excitement as Sofuoglu claims his first victory.

Competitive track action at the Pirelli Spanish Round continued with the FIM Supersport 300 Championship as the class continued to deliver typically thrilling and chaotic racing with an 11-strong lead group during the early part of the race doing their best to all claim victory at the Circuito de Jerez – Angel Nieto.

Bahattin Sofuoglu (Biblion Motoxracing Yamaha WorldSSP300 claimed victory after a battle at the front in of the field containing 36 riders, moving to the front of the field before a battle with Hugo de Cancellis (Team TRASIMENO) on the last lap with Ana Carrasco (Kawasaki Provec WorldSSP300) also fighting for victory; making up seven tenths of a second on the final lap. De Cancellis was penalised with a five-second time penalty, promoting Carrasco to second place with Sofuoglu, the nephew of WorldSSP legend Kenan Sofuoglu, claiming his first victory.

With Carrasco and second and de Cancellis penalised, Tom Booth-Amos (RT Motorsports by SKM – Kawasaki) claimed third position for his second podium at Jerez; moving into the Championship leader after his first weekend in WorldSSP300. Booth-Amos started the race in 15th, moving up 12 places throughout the race.

Scott Deroue (MTM Kawasaki MOTOPORT) claimed fourth place in the thrilling race, finishing a second behind Booth-Amos, but finishing just ahead of Meikon Kawakami (Team Brasil AD 78); a tenth between the pair. Kawakami had started from pole position but lost the lead early on but was unable to fight for the victory when the front four of Sofuoglu, Carrasco and de Cancellis broke away. Unai Orradre (Yamaha MS Racing) finished in sixth place with just two tenths between Deroue, Kawakami and Orradre.

Bruno Ieraci (Kawasaki GP Project) finished in seventh place after a tight battle with Ukrainian rider Nick Kalinin (Battley-RT Motorsports by SKM-Kawasaki) and Thomas Brianti (Prodina Ircos Team WorldSSP300), another group of riders separated by the smallest of margins. De Cancellis was classified in 10th place following his five-second penalty, having been in second place across the line.

Kevin Sabatucci (Kawasaki GP Project) finished in 11th place, seven tenths behind de Cancellis and more than three seconds behind Brianti, who was the next rider ahead of him on track. There were three tenths separating Ton Kawakami (Yamaha MS Racing)and Sabatucci as they crossed the line.

Jeffrey Buis (MTM Kawasaki MOTOPORT) was also penalised with a five-second time penalty during the race which demoted him from a top-five battle to 13th place with Filippo Rovelli (Kawasaki ParkinGO Team) and Alvaro Diaz (Biblion Motoxracing Yamaha WorldSSP300) rounding out the points in the exciting race.

Christian Stange (Freudenberg KTM WorldSSP Team) had an off in the early stages of the race which dropped him down to the back of the field and was eventually classified in 31st place. Yuta Okaya (MTM Kawasaki MOTOPORT) had a crash which took him out of contention for the race victory while Oliver König (Freudenberg KTM Junior Team) also had an off before retiring from the race. Other retirements included Mika Perez (Prodina Ircos Team WorldSSP300) and Alejandro Carrion (Smrz Racing – Willi Race).

P1 Bahattin Sofuoglu (Biblion Motoxracing Yamaha WSSP300):
“I’m very happy with that result because it is my first podium in this Championship. I really worked hard for it and now I have achieved my target. I am even happier that it came as a victory!”

P2 Ana Carrasco (Kawasaki Provec WorldSSP300):
“I’m really happy to be here today. I think yesterday we deserved to also be here, the race was a bit crazy and I finished the race a little bit sad. Today is good to be on the podium. For sure, for the Championship, it’s a really good result. I felt good but the race was very hard. I tried my best to finish first but today I did not have anymore, but I gave my best so I’m happy with that. I want to say thanks to the team because they did a really good job during this difficult period and also to my personal trainer because they were really good for me. I want to say thanks because we are on the podium”

P3 Tom Booth-Amos (RT Motorsports by SKM – Kawasaki):
“It was a tough race today. It wasn’t easy, many people hit me and sent me wide. For me, I think I had the best pace to break away from the group, but I couldn’t get to the front. I’m happy enough with third, it’s going to help towards the Championship which is obviously where we’re looking towards and looking forward to Portugal now. I just want to say thanks to my team, my sponsors and Kawasaki; they have helped a lot!”

Championship Standings after Race 2, Round 1