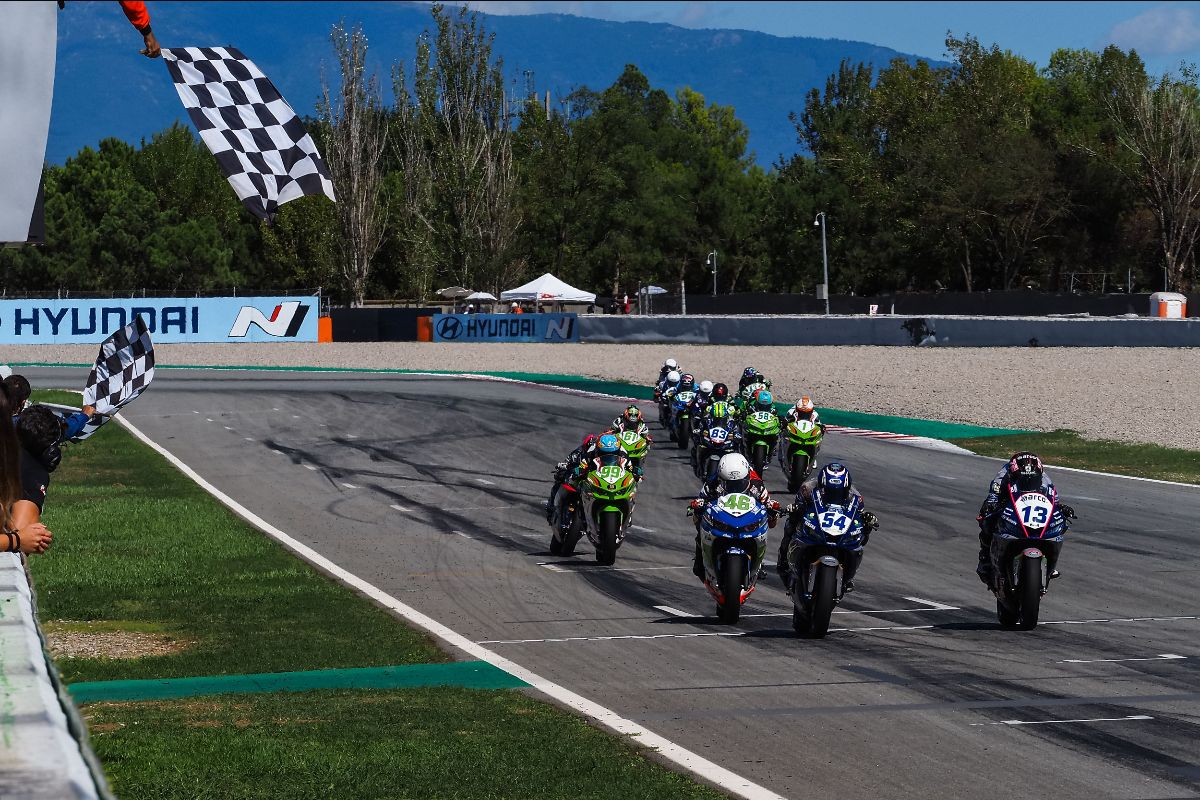 Just 0.003s separated the top two in Race 2 as WorldSSP300 had the closest finish in the Championship’s history, while Kawasaki secured the Manufacturers’ Championship.

The final race of the FIM Supersport 300 World Championship’s visit to the Circuit de Barcelona-Catalunya was a record-breaking race as Bahattin Sofuoglu (Biblion Yamaha Motoxracing) claimed victory by just 0.003s in Race 2 for the Hyundai N Catalunya Round, fending off Alvaro Diaz Cebrian (Arco-Motor University Team) in a drag race to the line.

The top five in the race were able to break away from the chasing pack in the first half of the race although as the second half of the race the secondary group was able to close the gap with a group of around 20 riders fighting for podiums and the race victory. With a few laps to go, Diez Cebrian made a move for the lead but was overhauled by Sofuoglu heading into the final lap, with the Turkish star claiming his first victory since the 2020 Teruel Round.

Diaz Cebrian claimed his first WorldSSP300 podium with second place and missed out on a sensational victory by the narrowest of margins, while Samuel Di Sora (Leader Team Flembbo) claimed third place as he returned to the rostrum. The French rider had been leading in the closing stages but finished in third place, just 0.096s from Sofuoglu. Di Sora was the lead Kawasaki rider in the race with his podium finish enough for Kawasaki to claim the Manufacturers’ Championship with four races to spare.

Adrian Huertas (MTM Kawasaki) missed out on a podium place by four tenths but fourth place for the Championship leader meant he was able to extend his Championship lead over Tom Booth-Amos (Fusport – RT Motorsports by SKM – Kawasaki) after the British rider was declared unfit for Race 2 following a Race 1 crash, with Huertas extending his lead over Booth-Amos to 43 points.

P1 Bahattin Sofuoglu (Biblion Yamaha Motoxracing)
“I’m very happy because we worked a lot for the podiums yesterday and today. I’m very happy for this. When I was not good, making not very good results, I want to thank Kenan because he always helped me and my brother Toprak and my other brothers Can and Deniz. A big thanks to them; we are always together, and we always learn together. I’m very happy with this, we did a great result. I want to thank my team; they made no mistakes this weekend.”

P2 Alvaro Diaz Cebrian (Arco-Motor University Team)
“I’m very happy with this podium. My first race as a wildcard and thanks to my team for all their support, and also Yamaha.”

P3 Samuel Di Sora (Leader Team Flembbo)
“Third again! Here we are. After yesterday’s race, when the bike was not going well, it was a pretty heavy shock for all of us as we know we’re very strong here. To be back on the podium today, fighting for the victory, I led many laps. I want to thank my team for the job they did.”